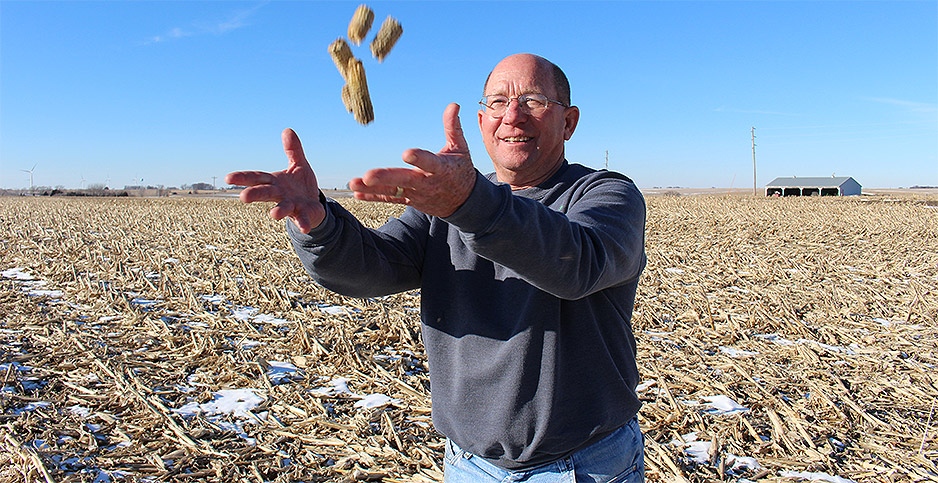 CORNING, Iowa — A fight over how to fuel Americans’ cars is beginning to wear on Ray Gaesser.

Gaesser farms 5,500 acres of corn and soybeans in Adams County, where cornfields stretch to the horizon and one of the biggest employers is a corn-to-ethanol plant. When President Trump brags about supporting farmers, he’s talking about Gaesser and his neighbors, who help put millions of gallons of corn-based fuel in the nation’s gas tanks each year.

But for every announcement the president makes promoting ethanol, Gaesser can point to an action by Trump’s EPA that does exactly the opposite.

The latest came last fall, when the agency backed away from a White House deal to make sure ethanol volumes don’t shrink due to biofuel-blending exemptions granted to some small refineries — a decision that’s frustrated farmers and the biofuel industry days ahead of the Iowa Democratic presidential caucus.

"We’re hoping the president will put pressure on EPA to follow through with the agreement," Gaesser said as he walked through patches of snow on a cornfield one recent afternoon. "The message from EPA was not what we expected. They know from us that farmers are not pleased with the result."

Trump, who will visit Iowa today, maintains support in farm country, including from Gaesser, a former president of the American Soybean Association and Republican candidate for Iowa secretary of agriculture in 2018. But even a modest erosion of loyalty in these Republican strongholds could cost the president the state this fall, political observers say, if bigger cities like Des Moines vote heavily Democratic.

With Trump set to speak at a rally in Des Moines tonight, Iowa Democrats organized a news conference call to criticize his biofuel policies. On the call this morning, former Lt. Gov. Patty Judge noted that EPA Administrator Andrew Wheeler, a polarizing figure with ethanol interests, wasn’t reported to be traveling with the president.

"I just think it’s curious that Mr. Wheeler isn’t going to be among the guests here in Iowa," Judge said.

The fight isn’t necessarily partisan. Iowa Sen. Joni Ernst, a Republican who lives half an hour away in Red Oak, has threatened to call for Wheeler’s resignation if he doesn’t follow biofuel mandates to her satisfaction. So far, he hasn’t.

But another reliable Trump ally, the oil industry, says EPA has been overly generous, if anything, with ethanol by allowing for steady increases. Iowa doesn’t need biofuel mandates, petroleum groups say, because motorists will still demand the blends due to their higher octane levels.

The ethanol industry may be hurting, they say, but that’s because of a poor corn planting season and declining exports to China, not EPA policies.

"Agricultural communities face a lot of problems, but whether the Administration meets its legal obligations of small refineries and their workers just isn’t one of them," said the Fueling American Jobs Coalition, a group made up of independent refineries, gas stations and unionized refinery workers, in a statement to E&E News.

"Too much is never enough for some in the ethanol world," the group said. Even if refinery exemptions are successfully challenged, the coalition said, "just as sure as the sun will rise tomorrow over Iowa, biofuels interests will be back next year to ask for even more."

Gaesser and his wife, Elaine, moved to Iowa from Indiana in 1977, looking for "just a place with some opportunity," he said. They have a grown daughter, Jennifer, and a son, Chris, who’s a partner in the farm.

Gaesser has a commanding view of the flat southwest Iowa countryside from his office — a lighthouse-like addition he put on his home a few years ago, with windows all around and a spiral staircase to the first floor, where water trickles in a miniature indoor pond complete with a waterfall. Out one window, he can see the buildings of downtown Lenox, population 1,407, several miles away. Out another, he can view the Poet Biorefining plant in Corning, which according to Poet LLC produces 65 million gallons of ethanol from about 23 million bushels of corn annually.

Biofuel helps run the economy in places like Adams County, where the population of 3,700 is less than half of what it was in 1900.

"There’s some manufacturing; we just don’t need as many people as we did then," Gaesser said.

Ethanol plants have another benefit the public may overlook, said Dan Wych, plant manager at Southwest Iowa Renewable Energy’s biofuel facility in Council Bluffs. They make a byproduct called distillers grains, which farmers put in feed for hogs, cattle and other livestock.

But 2019 wasn’t kind to many biofuel producers. Twenty plants nationwide closed either permanently or temporarily. Four plants in Iowa stopped or suspended operations, and biofuel production fell, according to the IRFA. Industry groups blame EPA policies.

Nationally, farmers are under financial strain, increasing pressure on farm-state lawmakers. The Agriculture Department said farm income, depressed for several years, will climb 10% for 2019 — but that’s 32% off its peak in 2013, adjusted for inflation. Farm debt will rise 3.4%, to $415.5 billion, led by real estate debt. Working capital, or the amount of cash available to cover expenses after paying down debt, will decline 12.5%, USDA said.

The dark days of the 1980s farm debt crisis may not be back, said Gaesser, who’s also a director at First National Bank in nearby Creston. "But it’s been a continuous drag the last three or four years."

Farmers believed they’d found a champion in Trump, who promised support for ethanol on the campaign trail. On June 11, 2019, he seemed ready to come through, appearing at Southwest Iowa Renewable Energy’s plant in Council Bluffs to announce that he was granting the ethanol industry’s biggest wish: lifting summer restrictions on the sale of higher-ethanol fuel called E15.

Savings from the lower prices of ethanol-blended fuel would "go straight into the pocket of hard-working families all across our land," Trump said on a lawn outside the plant that day as the company’s chief executive officer, Mike Jerke, looked on.

Seven months later, Jerke’s optimism is fading. Sales of E15 are climbing, but that victory has been overshadowed by another development in EPA policy. Since Trump’s appearance, the agency has let 31 small petroleum refineries sidestep biofuel mandates, a policy the federal Clean Air Act allows when refineries can show they would suffer financially if forced to meet them.

Those exemptions amounted to 1.43 billion gallons’ worth of renewable fuel credits for the year, according to EPA.

"The president says absolutely the right things," Jerke said in an interview in his office. But he added, "His actions speak louder than words. We look for the policy to reflect what we hear, and it’s not."

At issue is what EPA does after it exempts a refinery from biofuel blending requirements. Ethanol groups say the "lost" gallons should be reallocated to other refineries so overall volumes aren’t sacrificed. Trump promised industry insiders in an Oval Office meeting in August that EPA would do just that.

But EPA veered on the details days later. In what looked like a concession to petroleum refiners, the agency said it would indeed reallocate waived gallons — but based on Energy Department recommendations, which have been smaller than actual volumes exempted in recent years.

That idea, Jerke told E&E News, "does not have a logical thread to it."

They argued that boosting requirements on other refineries to make up for exemptions violates the Clean Air Act. But the debate, they say, misses a bigger point: Small refinery exemptions aren’t hurting biofuel.

The "blend rate" — the amount of ethanol mixed with gasoline nationwide — climbed from 10.05% in the first 10 months of 2018 to 10.15% in the same period last year, according to the U.S. Energy Information Administration. With summer restrictions lifted, sales of E15 climbed 46% nationally last summer, according to Growth Energy, a biofuel trade group.

While the EIA also estimated that fuel ethanol production would decline slightly to 15.8 billion gallons for 2019, it cited "poor market conditions for ethanol producers and oversupply issues," not government regulations.

The biofuel industry’s greater challenges, Williams said, are its tendency to produce more ethanol than the market demands and its shortage of manufacturing capacity for biodiesel.

That’s one of the flaws with the RFS, petroleum groups say. Mandated volumes of biofuel have been increasing, but there are still plenty of cars on the road that aren’t supposed to run on high-ethanol fuel, and the nation’s refueling infrastructure isn’t fully set up to handle the amount of biofuel to meet the EPA requirement.

Yet the RFS requires more biofuel than producers can make, petroleum groups say, so they import millions of gallons a year to comply. The United States imported 1.2 million barrels of fuel ethanol and 3.9 million barrels of biodiesel in 2018, according to the Energy Information Administration.

Corn-state senators are tracking the debate with keen interest — and with an eye toward November.

"The president is going to be challenged by farmers over the next nine months on whether or not he’s ethanol friendly," Republican Sen. Chuck Grassley, a champion of Iowa ethanol, told reporters in a Jan. 21 conference call.

He said he’s asked EPA Administrator Wheeler to report monthly on small refinery waivers and prove to lawmakers that waivers aren’t eating into the 15-billion-gallon ethanol volume mandated by Congress.

"We’re going to hold the president’s feet to the fire," Grassley said. "This is about keeping Trump’s promise."