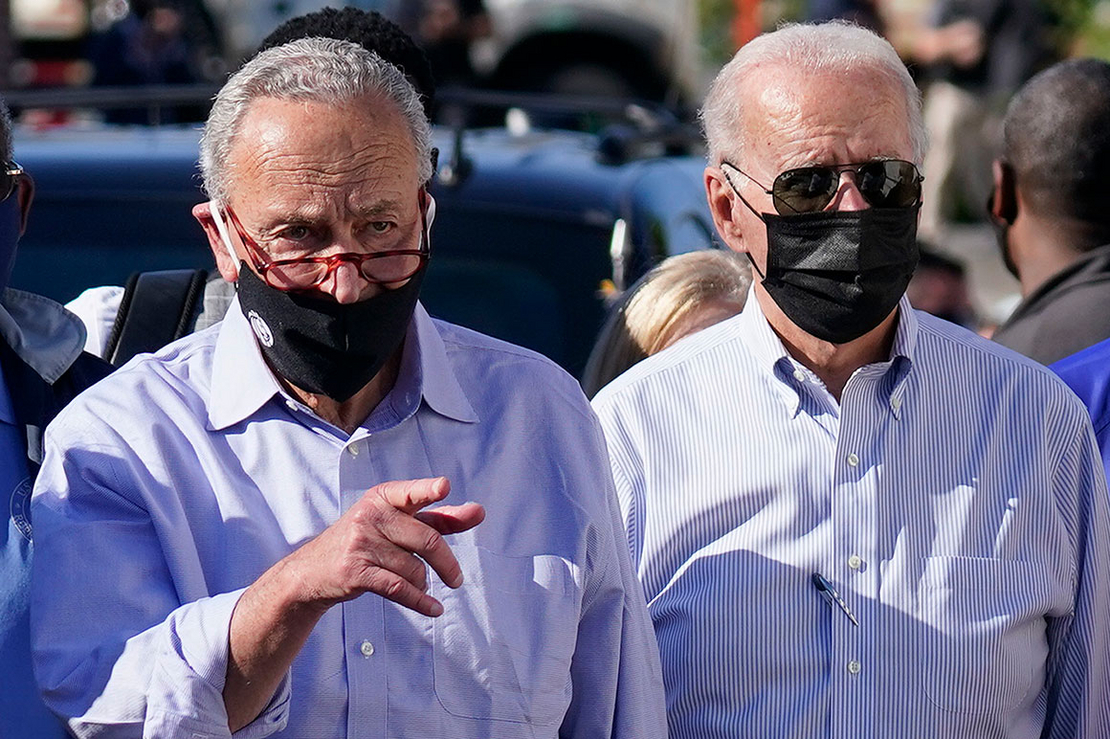 The internal divisions, fueled by a report that Senate Energy and Natural Resources Chair Joe Manchin (D-W.Va.) opposes as much as $2 trillion in spending under consideration, come as several House committees this morning will mark up their respective portions of the $3.5 trillion package.

Both Senate Majority Leader Chuck Schumer (D-N.Y.) and House Speaker Nancy Pelosi (D-Calif.) yesterday acknowledged the pressure from some Democrats for a smaller infrastructure package but signaled they’re sticking with the $3.5 trillion figure authorized by the budget resolution. Manchin and Sen. Kyrsten Sinema (D-Ariz.) have repeatedly raised deficit concerns over reconciliation, although both backed the budget resolution last month.

Schumer did not rule out shrinking the topline number, but he also said he plans to move “full speed ahead,” despite Manchin’s timing concerns. “We want to keep going forward,” Schumer told reporters. “We think getting this done is so important for the American people for all the reasons we have outlined, so popular with the American people.”

Progressives, however, could be unwilling to accept a smaller package, particularly in the House, where they have a large voting bloc that could determine the fate of the reconciliation and bipartisan infrastructure bills.

Pelosi also did not rule out a smaller topline number, but in a nod to Manchin’s concerns, noted that Democrats plan to “pay for more than half, maybe all of the legislation.”

“We will have a great bill that honors the values of the president and his vision, the Biden vision, for a better future, to build back better for women, and we will have our negotiations,” she told reporters, adding that the House panels will mark up to the $3.5 trillion allowed under the budget resolution.

Senate Budget Chair Bernie Sanders (I-Vt.) said the $3.5 trillion number “is already the result of a major, major compromise.” “At the very least, this bill should contain 3.5,” Sanders told reporters. 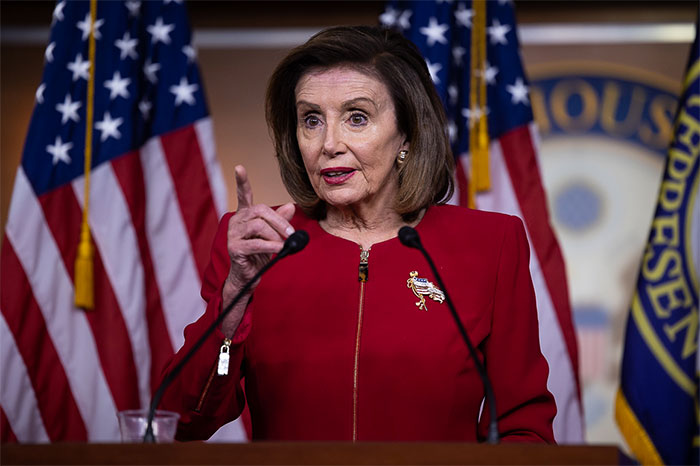 Hurricane Ida and the massive wildfires in the West have also given Democrats ammunition in their bid to stuff the reconciliation bill full of climate policies. Schumer noted yesterday that Ida brought unprecedented rainfall to New York City, breaking a record set just days before during Hurricane Henri.

But Manchin will also be in charge of writing a huge section of the climate policies, namely the proposed Clean Electricity Payment Program (CEPP). Schumer said the ultimate goal is to hit President Biden’s targets: Eighty percent clean electricity and a 50 percent overall greenhouse gas emissions reduction by 2030, though he declined to comment on talks with Manchin about the policy.

“Those are strong goals. There are various ways to achieve them,” Schumer said. “Different people have different views on that, but we do want to meet the president’s goals.”

“We cannot afford missteps like allowing an Electricity Payment Program to be co-opted by polluters looking for another dirty energy subsidy,” wrote the groups, led by Friends of the Earth.

Among the objectionable power sources listed in the letter are fossil gas with or without carbon capture and storage or other fossil-based technologies; waste incineration; bioenergy, including biomass and biofuels; factory farm gas; landfill gas; hydrogen; nuclear; new “large-scale and ecosystem-altering hydropower;” as well as “all market-based accounting systems like offsets.”

“The climate emergency cannot be fooled or tricked by legislating that polluting energy sources can now qualify as clean,” the groups added. “Likewise, greenwashing dirty energies will not change their environmental injustices.” 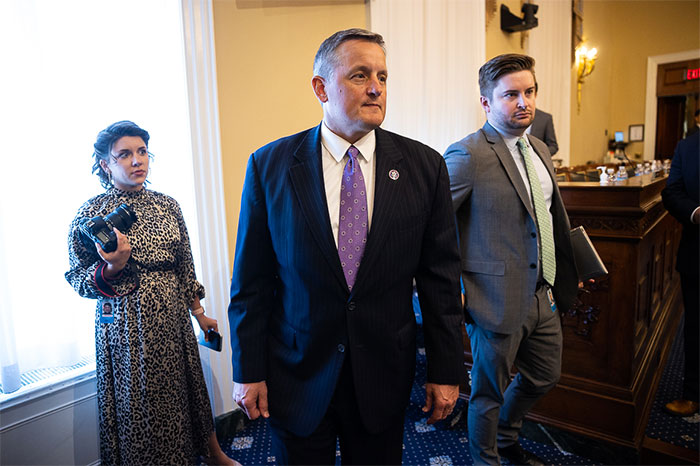 As Democrats maneuver behind the scenes to tamp down dissent that threatens their two-track infrastructure legislative strategy, several House committees will mark up their respective portions of the reconciliation package.

The House Natural Resources Committee will resume consideration this morning of its $31 billion contribution to the broader reconciliation package.

Members are bracing for another marathon session following last week’s several-hour opening salvo, where lawmakers debated 34 amendments and held roll call votes on 20; they will take up the remaining 14 today at the start of the proceedings (Greenwire, Sept. 3).

Republicans are expected to offer dozens of additional amendments. A committee spokeswoman for the minority told E&E News that GOP members have roughly 110 amendments already in the queue and intend to file more.

It’s not clear if they intend to request each amendment receive a roll call vote, as they did for the vast majority of amendments last week, or if exhaustion and impatience will supersede Republican ambitions to slow-walk the markup of a bill they despise.

Every Republican amendment was rejected last Thursday, and the results today will likely be the same, despite an assertion from ranking member Bruce Westerman (R-Ark.) that he and his members were only “offering … commonsense, science-based amendments to correct some of the most dangerous parts of the package.”

Amendments last week took aim at funding in the Democratic legislation for the Civilian Climate Corps, increased royalties and fees for energy extraction on federal lands, and prohibitions on drilling from critical minerals near national monuments, among other items. 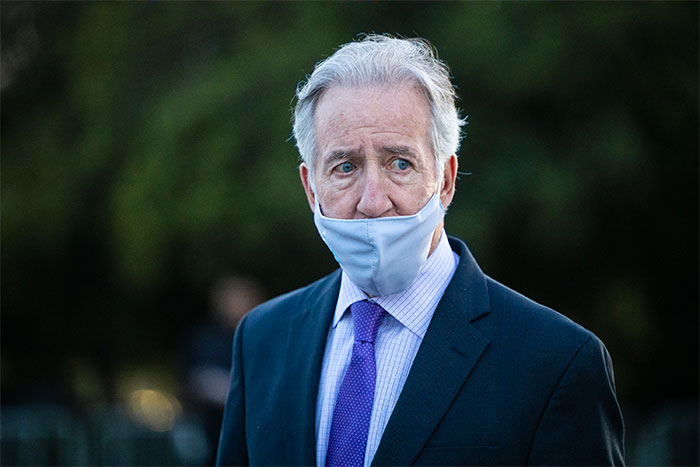 The House Ways and Means Committee this morning will kick off what is expected to be several days of reconciliation markups, with the proceedings expected to continue early next week.

“This is our historic opportunity to support working families and ensure our economy is stronger, more inclusive, and more resilient for generations to come,” Neal said in a statement.

Conspicuously absent from the draft measures released this week are energy taxes. Those taxes are expected to be a central focus for reducing emissions in the reconciliation process. Moreover, there is no mention of other revenues to pay for some or all of the $3.5 trillion in spending authorized by the budget resolution.

Both issues are expected to be addressed when the committee reconvenes early next week to continue its markups.

Democrats are expected to release a revised version of the “Growing Renewable Energy and Efficiency Now (GREEN) Act,” H.R. 848, which contains multiyear extensions and expansions of key clean energy tax breaks, including the investment and production tax credits and electric vehicle incentives.

On the Senate side, the Finance Committee has already advanced a sweeping rewrite of the energy tax code, the “Clean Energy for America Act,” S. 1298, which addresses many of the same areas as the competing House bill but aims to drive the incentives to be technology-neutral.

Nearly 750 companies involved with the solar industry yesterday reiterated their past calls for long-term extensions of the investment tax credit, as well as the inclusion of a direct-pay option to ease the financing of new projects.

The Senate bill would also jettison a host of fossil fuel tax incentives, although it remains to be seen whether those provisions would survive in the 50-50 chamber, given that several Democrats hail from oil-, gas- or coal-producing states.

The fossil fuel breaks would be maintained under past versions of the "GREEN Act," but dozens of House Democrats last week called for their repeal in the course of reconciliation (Greenwire, Aug. 31).

Also this morning, the House Science, Space and Technology Committee will meet to mark up its $45.5 billion reconciliation bill, which would hand billions to the Department of Energy, National Science Foundation (NSF) and NOAA. Under the draft bill released last weekend, DOE would receive nearly $15.8 billion, while NSF would see $11 billion and NOAA $4.2 billion.

Much of the funding would go toward addressing maintenance backlogs at DOE and NSF facilities, but the bill also steers billions toward clean energy and climate research within the agencies under Science’s jurisdiction (Greenwire, Sept. 7).

Schedule: The House Science markup is Thursday, Sept. 9, at 10 a.m. via webcast.

Schedule: The House Education and Labor markup is Thursday, Sept. 9, at 12 p.m. via webcast.

Schedule: The House Agriculture markup is Friday, Sept. 10, at 1 p.m. in 1300 Longworth and via webcast.