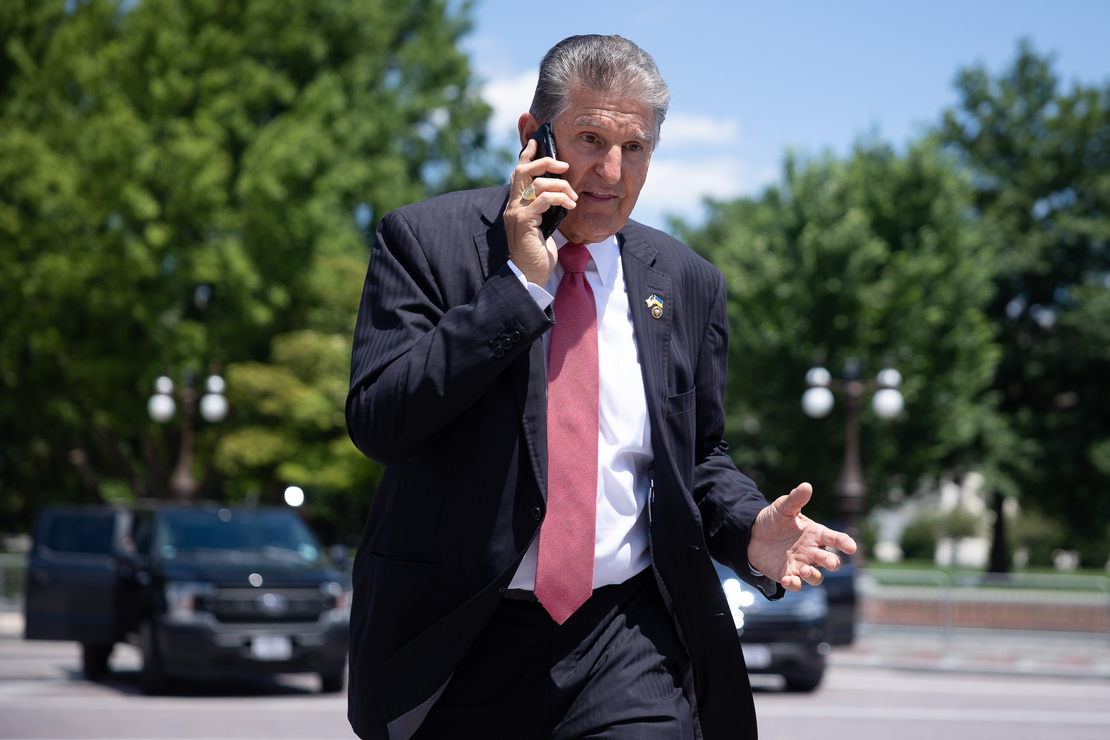 Environmentalists and progressives raged last night after West Virginia Democratic Sen. Joe Manchin killed the clean energy provisions of Democrats’ reconciliation bill, snuffing out nearly a year of negotiations and the first major attempt to legislate on climate change in over a decade.

The move almost certainly quashes the prospects for major climate legislation this Congress. With Republicans favored to take back at least one chamber in this year’s midterms, it could mean climate advocates will have to wait years to advance the kind of large-scale, emissions-slashing policies that were being negotiated as part of the reconciliation package.

“I’m not going to sugar coat my disappointment here, especially since nearly all issues in the climate and energy space had been resolved,” Senate Finance Chair Ron Wyden (D-Ore.) said in a statement. “This is our last chance to prevent the most catastrophic — and costly — effects of climate change.”

It’s a massive setback for Democrats politically and a blow to the nation’s climate goals. President Joe Biden had pledged to decarbonize the power sector by 2035 and halve emissions by 2030.

The $300 billion suite of clean energy tax credits that was in play during the current round of negotiations would have gone a long way toward those targets. Scientists say the world needs to reach net-zero greenhouse gas emissions by 2050 to avoid the worst impacts of climate change.

Manchin, the Energy and Natural Resources chair, and Schumer had been negotiating behind closed doors for weeks. Democrats had hoped to pass a slimmed down version of the $1.7 trillion “Build Back Better Act” by August, in part because many states are expected to announce hikes to Affordable Care Act premiums next month.

The pair struck an agreement on the drug-pricing element of the bill last week. The source said Manchin would only commit to supporting drug pricing and two year extensions of ACA subsidies in a bill next month.

Indeed, Manchin had publicly floated the possibility this week, telling reporters Wednesday, “We know what we can pass. It’s basically the drug pricing on Medicare” (E&E Daily, July 14).

The latest Consumer Price Index, which showed inflation accelerating in June to the quickest annual pace in four decades, only fueled Manchin’s concerns about a big spending package.

“Political headlines are of no value to the millions of Americans struggling to afford groceries and gas as inflation soars to 9.1 percent,” Manchin spokesperson Sam Runyon said in a statement last night.

“Senator Manchin believes it’s time for leaders to put political agendas aside, reevaluate and adjust to the economic realities the country faces to avoid taking steps that add fuel to the inflation fire,” said Runyon.

Wyden said he still hopes to salvage the clean energy tax provisions he authored and negotiated that were under consideration. Failure, he said, “really is not an option here.”

“There truly aren’t words for how appalled, outraged, and disappointed we are,” said League of Conservation Voters Senior Vice President of Government Affairs Tiernan Sittenfeld.

“Senator Manchin had every opportunity to stand up for climate, jobs and justice, and save families money when they need it most, but instead he is choosing to stand with polluters. We urge him to reconsider — our children’s future depends on it.”

Scaling back to nothing

The rage from Democrats and the environmental community appears to stem in part from the fact that Schumer had already granted concessions to Manchin.

According to the Democrat briefed on the matter, Schumer had agreed to decrease the package’s total climate spending from $555 billion originally in the House-passed bill to $375 billion to secure Manchin’s support.

That reduction in total price tag essentially brought the package down to a tax title with extensions for a host of wind, solar, energy storage, carbon capture and nuclear energy technologies. Democrats’ accounting of the credits said the provisions could reduce emissions by 40 percent by 2030.

But the agreement would not have included two tax provisions that Manchin opposes: direct pay options for clean energy credits and electric vehicle incentives.

Schumer also guaranteed he would match any EV credits with incentives for hydrogen-fueled vehicles, according to the source.

Manchin has raged against more electric vehicle deployment over fears that the United States did not have access yet to the needed critical minerals to ensure a lack of dependence on foreign nations for a steady supply to power wide EV use.

Those concessions came as Manchin already shrank the ambitions of Democrats’ climate agenda by rejecting last year one of the bill’s marquee climate policies, known as the Clean Electricity Performance Program. The $150 billion measure would have paid utilities that deploy at least 4 percent more clean energy each year and fine those that do not.

Even more confusing for climate advocates, Manchin seemed to endorse the scaled-back climate portion of reconciliation earlier this year in the aftermath of his decision to squash the original House-passed “Build Back Better” bill.

“The climate thing is one that we probably could come to an agreement much easier than anything else,” he said in January (Greenwire, Jan. 4).

To be sure, those comments came prior to Russia’s invasion of Ukraine, which in combination with post-pandemic demand recovery, caused energy prices to spike to all-time highs and resulted as a major driver of high inflation numbers the past few months.

Climate ‘left at the altar’

Environmentalists, who fought throughout Biden’s campaign and presidency to put climate in the spotlight, were left stunned by the news yesterday.

Green groups and other Democrats called for Biden to use executive authority to reduce emissions and to declare a climate emergency.

Sen. Brian Schatz (D-Hawaii) was blunt: “It is time for the executive branch to take action on climate,” he said in a tweet.

Brett Hartl, government affairs director at the Center for Biological Diversity, said in a statement, “It’s outrageous that Manchin and the Republican party have killed climate legislation this Congress, but the Biden administration can still do critically important things to address the climate crisis, right now.”

He added, “President Biden should use his executive powers to declare a climate emergency, deny approval of disastrous fossil fuel projects like the Mountain Valley Pipeline, and halt all new oil and gas drilling onshore and offshore.”

Whatever the executive branch does, Manchin’s decision could leave a lasting congressional legacy.

Congress failed in 2010 to pass the Waxman-Markey cap-and-trade bill, even as Democrats successfully passed health care reform. Congressional staffers and environmentalists who worked on that bill 12 years ago watched yesterday in dismay as climate once again appeared to fall by the wayside.

A Democratic aide familiar with negotiations said if lawmakers cannot salvage the climate provisions after yesterday, it would mark “one of the most consequential inactions in congressional history.” If Manchin follows through, the aide said, “climate is once again being left at the altar.”

“Senator Joe Manchin has written his legacy: blocking our best shot at a transition to affordable, American clean energy and a liveable planet,” Raad said in a statement. “Senator Manchin has betrayed the American public and the mandate given to the Democratic Senate to act on climate.”