Fusion may be a CO2 breakthrough, but can anyone afford it? 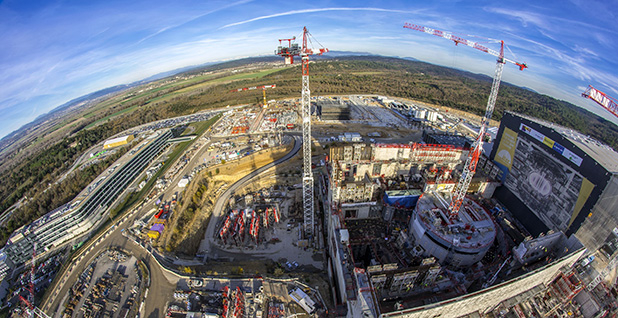 An aerial view of the International Thermonuclear Experimental Reactor fusion project under construction in France. ITER

Wayne Solomon and his colleagues at General Atomics (GA) have spent nearly five years building the world’s most powerful supermagnet, a 1,000-ton array designed with enough muscle to lift an aircraft carrier out of the ocean.

The actual purpose of the central solenoid, as it’s known, is hardly less otherworldly.

Its electromagnetic fields must surround and confine a plasma cloud of charged hydrogen particles burning at more than 250 million degrees Celsius inside the experimental International Thermonuclear Experimental Reactor (ITER) fusion reactor under construction in southern France. San Diego-based GA announced last week that the manufacture and testing of the first of seven magnet coils had been completed at its Poway, Calif., laboratory in collaboration with the Oak Ridge National Laboratory.

The $20 billion-plus ITER project — which is being supported by the European Union, the United States and five other member countries — is designed to produce the world’s first demonstration of a successful nuclear fusion reaction in 2025. If it succeeds, it would mark a critical step toward dreams of fusion energy as an unlimited source of carbon-free electric power.

But a second essential question about fusion power’s future also absorbs Solomon and a team of U.S. scientists at leading research labs: Assuming fusion works, can anyone afford it?

Solomon is science director for magnetic fusion energy at GA, a leading energy and defense contractor. He is also a lead author of a report by the Energy Department in December presenting a development plan for fusion reactors small enough for utilities or private technology companies to build at a reasonable cost.

With competing research projects in Asia and Europe in mind, the authors propose relying on U.S. technology to ensure an American-made fusion reactor.

"It doesn’t only matter that it generates cheap electricity. The upfront costs have to be manageable," Solomon said in an interview with E&E News.

The new report from DOE’s Fusion Energy Sciences Advisory Committee (FESAC) captures confidence among researchers that a dream of fusion energy, dating back to the Cold War, will finally be achieved.

Construction of the ITER reactor, spanning 60 football fields, is 70% complete. GA’s seven magnets — the last scheduled for delivery in 2023 — are funded by DOE and are the largest U.S. contribution to the project. The electromagnets’ power come from the consoles, each wound with 3 miles of superconducting cable chilled to 4.5 kelvins, or about minus 270 C, to maximize current flow.

"There has been a fundamental shift and a recognition that the time is right" to make fusion happen, Solomon said.

But the DOE report is also a reality check, calling for an extended research and development plan to overcome technological questions that ITER won’t answer, including managing the tremendous heat and neutron impacts inside the reactors.

The answer may lie in protecting vulnerable surfaces with a continuous circulating flow of liquid lithium, Solomon said.

Research on these issues would take a decade under the FESAC plan, leading to proposals to have a pilot fusion reactor running by the 2040s, demonstrating a model for commercial reactors.

"As we take this forward … we can show people maybe a pilot plant that costs $6 billion or $7 billion" rather than $30 billion, said Steven Cowley, head of the Princeton Plasma Physics Laboratory (PPPL) in New Jersey, in an interview with E&E News in September (Energywire, Sept. 21, 2020).

The plan has consensus support from experts at DOE and university laboratories and several of the leading private-sector fusion startups, including Commonwealth Fusion Systems, a Massachusetts Institute of Technology spinoff, and TAE Technologies in Orange County, Calif. (Energywire, Sept. 30, 2020).

A key goal is to bring U.S. utilities into the pilot plant project, "so that this actually meets the market needs," said Richard Hawryluk, a PPPL associate director, speaking at a briefing on the FESAC plan last year.

A make-or-break test for grid companies, meanwhile, is whether fusion reactors can deliver significantly more electricity than the reactor requires to run the plasma reaction and operate auxiliary structures.

Commonwealth Fusion Systems recently said it sees a clear path toward creating a reaction that generates up to 10 times more energy than it consumes. But that estimate refers to the heat from the reactor, not electric current, and so won’t settle whether its modeled power plant would produce a electricity gain, Solomon said.

The DOE plan ups the ante for the Biden administration and Congress, with its new Democratic leadership.

DOE’s Fusion Energy Sciences’ current annual budget is approximately $671 million, including $247 million for a U.S. contribution to ITER, which funds U.S.-built components. Significant increases would be needed to create and run the new research facilities named in the FESAC report. That could be a challenge in the current Congress, as efforts to raise the DOE budget dramatically have not gained traction in the past.

The report also calls for increased funding for basic research on plasma reactions, to ensure U.S. leadership with key technologies for the future.

"What is the real budget for these things? I don’t think we have an excellent answer. We have a good concept," Solomon said, but more work is needed on the concepts.

The report’s message is that work on "rest of the plant" issues must speed up now, alongside development of reactor designs, so that the pilot plant can lead to fusion power in time to affect the climate challenge, Solomon said.

"I think our current understanding makes us believe that is accomplishable, but there are challenges to be resolved, and this plan tries to talk about what are those challenges and what we have to do to deal with them," Solomon said.