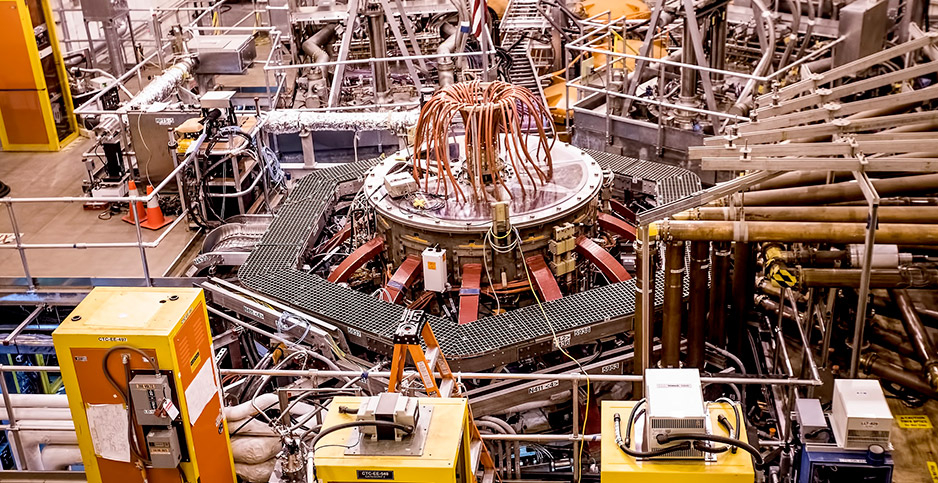 The long quest in the U.S. to mimic the sun’s mighty power by mastering nuclear fusion has added a new goal — the development of compact, affordable fusion reactors that could be widely deployed by utilities in the century’s second half.

Urged on by the Energy Department, a top-level committee of U.S. scientists has begun planning for a pilot fusion reactor plant smaller than the typical jumbo-sized units. It would be based on the massive $25 billion fusion test facility being assembled in southern France, the International Thermonuclear Experimental Reactor (ITER).

"As we take this forward … we can show people maybe a pilot plant that costs $6 billion or $7 billion" rather than $30 billion, said Steven Cowley, who heads the DOE-backed Princeton Plasma Physics Laboratory in New Jersey, where one of the competing designs for a utility-scale fusion reactor is under development.

A British physicist knighted for his leadership in his country’s fusion program, Cowley was recruited by PPPL in 2018 to revive a program hit by an embarrassing failure of its novel National Spherical Torus Experiment (NSTX) reactor two years before.

In an interview with E&E News, Cowley said the PPPL project is back on track, positioning it to capitalize on ITER’s startup midway through the coming decade.

With much fanfare, government and science leaders announced the start of main construction work on ITER in July (Energywire, July 29).

ITER’s leadership expects to see the achievement of a crucial milestone called "first plasma" in 2025. That is the moment when ITER produces the sustained conditions of immense heat and pressure required to force charged hydrogen isotopes to fuse into helium atoms, releasing energy. Although the reactor would not be fueled for the experiment, a successful launch would show that a fusion reactor could be self-sustaining, generating more heat than is needed to create fusion, officials say.

The reaction occurs within a cloud or plasma of hydrogen gas, whose temperatures of up to 150 million degrees Celsius require confinement away from the walls of the ITER chamber. That is achieved through a blanket of magnetic fields generated by the most powerful supermagnets ever invented.

Recent research achievements have advanced hopes that ITER’s success would lead to commercialization of fusion reactors some time after 2040. Despite the distance of that horizon, venture capitalists and private foundations have begun to stake initial claims in competing strategies (Climatewire, Aug. 24).

"They’re seeing something here like the new space industry where there’s a technology that’s going to have an enormously dominant role in the future, and they want to inject new life and capital into this and see if they can push it to market," Cowley said.

The acceleration of fusion reactor development in China and Europe is also driving concerns about commercialization, lest the U.S. wind up on the sidelines of a game-changing technology.

But Dean told a recent conference interviewer that commercializing fusion power is not yet a U.S. program. "It’s a goal. It’s an idea," he said. There is no top-level agreement among the White House, Congress and major utilities to actually do it. Missing is the organizational and financing structure "committed to getting to a power plant," Dean said.

The pilot plant program intends to start in that direction. It would not try to choose which of several competing approaches to fusion power to bet on, Dean said. Instead, it will spell out challenges to commercial development that must be overcome.

There may be political challenges first, because fusion is the capstone to "big" clean energy solutions, totally opposite in scale from rooftop solar units in a decentralized, "democratized" carbon-free electricity network that is a prime goal of many clean energy advocates.

Cowley argues that fusion generation can be the best zero-carbon backup source to high levels of wind and solar power if its costs are manageable.

He counts on that rationale to open — or reopen — a door for the Princeton project, one of the original fusion concepts.

PPPL is trying to shrink the size of ITER with a new design for the magnetic "blanket" that confines and insulates the plasma reaction so that it generates more heat than the operation consumes. "We know that if you make it big enough, fusion will work. We’re trying to push down the scale at which you can get to fusion conditions," Cowley said.

Cowley explained the concept by moving his hands as if he were winding a ball of yarn.

"It’s a bit like trying to hold Jell-O with knitting wool, right?" he said. The distinctive dessert provides a ready analogy for fusion scientists. "If you wrap the wool around the Jell-O — you’ve got this oozy thing in the middle, which is what we call the plasma." Lines from magnetic fields wind around the plasma as a spiral to hold it.

"Your grandmother will tell you … if you’re winding all in the same direction … [the ball] just falls apart." If instead you rotate the ball as you wind, the pieces hold the ball together, he said.

"It’s actually a rather clever little trick. How you do this is very technical," he said. ITER hasn’t managed that, he added.

Cowley’s task at Princeton began with a revival of the NSTX, which had to be shut down and rebuilt after a short-circuit in one of its magnet assemblies in 2016, according to a report by Physics Today, citing Michael Zarnstorff, the PPPL deputy director for research. Amid recriminations, the head of the program stepped down.

Today, ITER is a historic tribute to international scientific cooperation. For example, however tense relationships between President Trump and China’s leadership have become, scientific collaboration on fusion between the two countries’ scientists continues, ITER officials have said.

"We’re having great collaborations with the Chinese now where we’re working with them in the use of liquid metals to handle the heat coming out of the plasma," Cowley said.

But the goal of the pilot plant is to advance commercialization under a U.S. banner, the organizers spell out.

"As we move forward to a pilot plant, that’s unlikely to be an international collaboration," Cowley predicted.

"We will try and establish intellectual property and protect it. At this stage, it is so much science and not technology that we don’t feel a need … to protect our IP. But we’re right at the edge" when that view will begin to change, he said.

An interview with Cowley can include a tour back through the history of fusion science, led by a generation of scientists who launched the quest to create a peaceful application from the discoveries that created the hydrogen bomb.

"I had always hoped that I would be part of the last generation of fusion researchers, the ones who actually took it into the market, and to be honest, you know, I’m 60 years old and I don’t think it’s my generation," he said. "We need another generation of smart young people to come into the field and probably tell us we’re idiots."

But he expects to be present for the startup of ITER, scheduled in five years. It will be one of those unforgettable moments for science, he added. "And I want to be there. This is what I’ve done for my life — fusion."