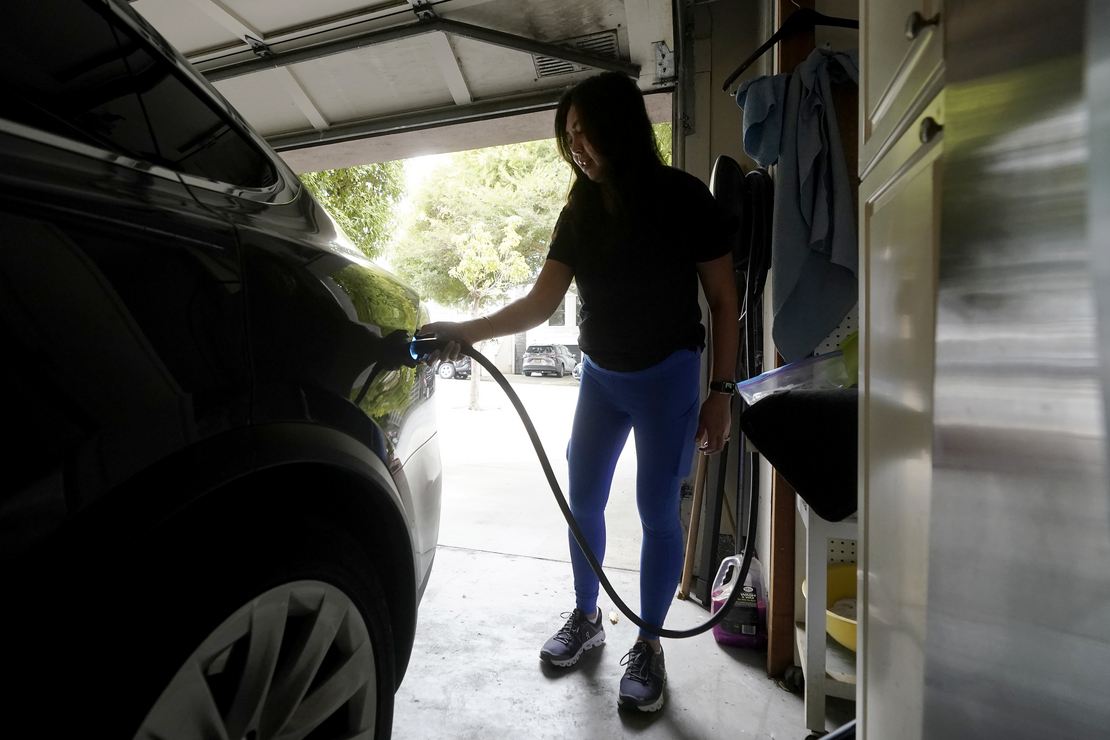 A woman charges a Tesla in her home garage in San Francisco. AP Photo/Jeff Chiu

Utilities think they’re doing the responsible thing when they ask their customers who have electric vehicles to plug them in at night. But a new study peers into the next decade and comes to the opposite conclusion.

Most charging should happen during the day.

Here’s why: The electric grid of 2035 could pulse with enormous quantities of solar power at midday, and electric cars are the most economical and climate-friendly place to put it.

The Stanford University study comes at a fluid moment in the trajectory of the electric vehicle and its fueling.

Automakers plan to deliver millions of EVs in the coming years, but drivers’ charging habits are still unwritten. Electric companies and the federal government, which will spend $7.5 billion in the next five years to build out EV-charging infrastructure, have not yet made key decisions about where chargers will be located or when they are intended to be used.

John Gartner, an EV and charging researcher at the Center for Sustainable Energy who is unaffiliated with the study, said the notion of moving charging to the sunny hours in an EV-heavy world makes sense.

“This load shifting of EV charging has great synergies to the growing percentage of renewable energy which on many days will be available in abundance before peak demand begins in the evening hours,” Gartner wrote in an email.

The study, published Thursday in the journal Nature Energy, originated with a burning question.

The Bits & Watts Initiative at Stanford’s Precourt Institute for Energy works with utilities and energy providers to understand the future electric grid. Two years ago, the center asked its stakeholders to name what concerned them most. “The number one answer was vehicle electrification and how that will affect the grid,” said Ram Rajagopal, an engineering professor and Bits & Watts’ co-director.

“It quickly became apparent to us,” he added, “that we don’t know what it’s going to look like when there’s a massive adoption of electric vehicles.”

To estimate the impact, Rajagopal and other researchers examined data from actual charging sessions — specifically, 2.8 million sessions by 27,000 EV owners in the San Francisco Bay Area three years ago. They found patterns to be anything but monolithic, with sessions at various locations and times of day.

The researchers modeled those sessions against a couple of scenarios.

One was now what it would look like if half of all passenger vehicles were electric by 2035 — a goal that California is starting to work toward, now that it has finalized its plan to phase out sales of combustion-engine vehicles by that year (Climatewire, Aug. 26).

And, as a grid stress test, it also considered the possibility of 100 percent EVs by that year.

The study modeled those levels of penetration in the Western Interconnection, a synchronized set of electric grids that runs from Canada to Mexico. The study focused on the U.S. bloc, which encompasses 11 U.S. states from California to Colorado, and today is home to 48 million cars.

By 2035, the study projected, the Western Interconnection could have three to five times as much solar as California, the country’s leading solar-energy state, had three years ago.

Finally, the authors looked at several different paths for where charging will happen. Most assumed that charging will occur principally in homes, but one scenario, called “Low Home High Work,” projected the results if people charged during the day.

In the wake of the Covid-19 pandemic and its bending of the workforce toward the home, it is uncertain what exactly “high work” means.

“How much of the workplace is still a workplace?” Gartner, the CSE researcher, asked.

Today most EVs are purchased by the wealthy, and charging occurs in the evening in the garages of their homes. But the study assumed that as greater numbers of more affordable EVs hit the road, more people without garages could charge their vehicles at locations away from home — and perhaps be incentivized to do so during the daytime hours.

The results of the study turn some orthodoxy on its head. Today, power companies generally guide their customers to charge vehicles in the dead of night because that is when power usage is at an ebb. Natural gas and coal plants are unoccupied, and electricity is cheap.

One of the study’s main findings is that the direction in which utilities are now nudging EV drivers — toward charging at night, and sometimes to use timers to have charging start and end at certain nighttime hours — would in 2035 actually increase costs to the grid and emissions.

The reason for that is some of that charging overlaps with the evening hours when electricity is in high demand. Timers, the study concluded, cause many users to turn on the juice at the same moment, causes a sudden ramp in energy demand, which itself causes problems.

All of the night moves have several consequences, the study said.

Night charging increases the amount of needed grid storage — in other words, the large and expensive batteries installed by utilities to help meet peaks of energy use. Shifting most charging to daytime would result in “remarkable storage savings,” the study said. With 50 percent of cars being EVs, daytime charging could save between $696 million and $1.4 billion.

The dark-hours scenarios also create a reason for fossil fuel plants to ramp, or spin up quickly, which is expensive and shortens the life of the plant.

Daytime charging also gives the electrons generated by solar farms somewhere to go. Without the presence of EVs, the researchers estimated that in 2035 the Western states would produce 5.5 terawatt-hours of surplus renewable energy. Daytime charging uses three times as much of that energy than a scenario of heavy night use, the study said.

Finally, the research found that charging in the sunny hours also measurably reduced the vehicles’ emissions. While EVs produce no tailpipe waste, they still contribute to climate change if the plants generating the electricity use fossil fuels.

With half the vehicle fleet being electric, heavy nighttime charging would produce emissions 36 percent higher than daytime charging.

One take-home message, the study said, is that plans for EV charging and plans for building tomorrow’s grid needs to be done more in tandem than they are now.

“The grid in 2035 will be significantly different than the grid today,” Rajagopal said. “What will be good then is not necessarily what is good now.”