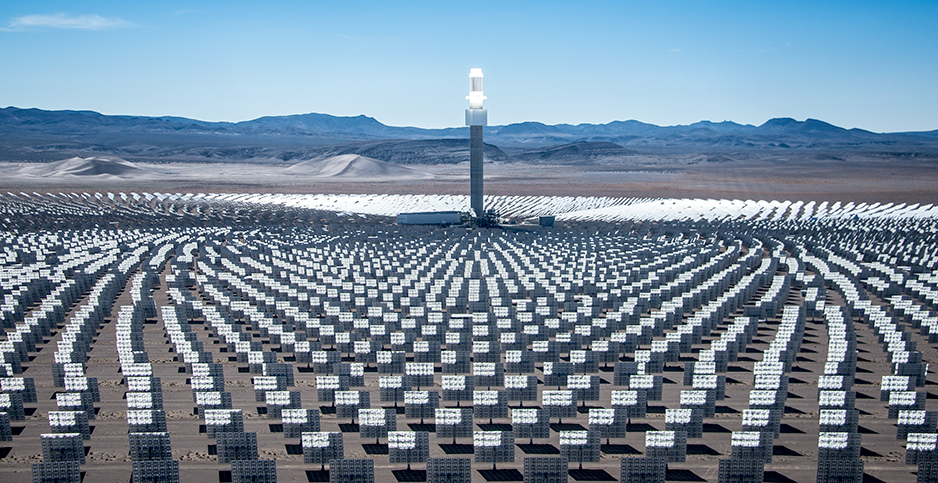 Concentrating solar power facilities like the Crescent Dunes project in Nevada are operating inefficiently because of poor training for their workers, according to researchers. Bureau of Land Management/Flickr

A hectic pace of development spurred by expiring national and state incentive programs has caused multiple reliability problems among the world’s most advanced solar energy plants, according to a study by the National Renewable Energy Laboratory (NREL).

Hurrying to complete plants and meet operational and financial deadlines often left crews assigned to operate the plants with too little training about how to deal with glitches.

The sprawling facilities with mirrors arrayed in the shape of large circles are referred to as concentrating solar power (CSP) projects. Their mirrors and lenses capture high temperatures needed to efficiently produce or store electricity. Almost 100 of these plants have been built around the world.

The report describes how NREL investigators expected to find that delays and breakdowns have been caused by glitches in the facilities’ high technology. But they wound up concluding that a welter of low-tech problems including difficulties making steam, leaking salt water, cleaning mirrors and poorly designed control systems were the major complaints of plant owners.

Described as a "first-of-its-kind report," it shows how a lack of quality controls caused cost overruns and poor preparedness dating back to 1991. That was the year when the U.S. pioneer of CSP technology, Luz International Ltd., went bankrupt after completing nine solar plants in California. At the time, it was the largest solar producer in the world with 1,800 employes.

After visiting owners or operators of nearly 80% of the operating CSP plants worldwide, NREL researchers found over 1,000 problems. More than half of them were operational and maintenance issues described in the report as "technology-agnostic."

The 257-page report, called "Concentrating Solar Power Best Practices Study," includes a long list of suggested fixes. Mark Mehos, the report’s lead author and a group manager at NREL, explained in an interview that none of the problems was attributed to specific plants as a way to encourage frank discussions with facility owners.

"The big lesson is that operations and maintenance people should be involved as early as possible in this process," he said, describing the opening of a particular plant. "Similarly, design engineers should be in the field long enough to offer their expertise to the operator."

Expensive problems could and often did happen. One suggested best practice was promptly finding and fixing a tank that leaked salt water onto a concrete floor.

There are two kinds of CSP plants. One, commercialized by Luz in California and later adopted in Europe, uses mirrors to focus solar heat on a network of troughs containing pipes full of mineral oil that becomes superheated. The heat is used to make steam that is fed into generators that make electricity.

The theory then was that CSP would quickly eclipse solar photovoltaic panels that use silicon to turn light photons into electricity because CSP could make electricity more cheaply.

After the Luz bankruptcy, its vice president, Mike Lotker, explained to reporters that he had to spend most of his time lobbying Congress to extend tax credits, getting approval from California regulators, raising money from investors, and then building and opening CSP plants in the desert before the tax credits would run out.

When building the ninth plant, he ran into cost overruns paying overtime and dealing with so many operational problems that he couldn’t raise money for a 10th plant.

"Management," he explained, "had to perform flawlessly in order to succeed."

The second type of CSP uses mirrors or lenses on the ground to focus sunlight and direct it to generators on the tops of tall "power towers," where steam is made. Some forms use magnified sunlight to heat salt into a molten form that can create steam for electricity or store heat for future use.

There are about 10 such plants in the world. They have also experienced a variety of operations and maintenance problems.

Meanwhile, over the last 10 years the big price reduction in solar power has come from an older technology: silicon panels. In many places they can now compete with electricity produced by fossil fuels.

Europeans have had some of the same problems as Americans.

In Spain, for example, the feed-in tariff was a huge government incentive assuring the owner of the plant a high price for its electricity. Becoming eligible for that, raising other money and meeting expiration deadlines became the main focus of the buyers and the builders of the plants.

According to the NREL report, the handoff to the team that would actually run and maintain the plant often came hurriedly and too late.

Ideally, a company would build a smaller plant first and use the experience to build a larger one, explained Mehos. "Or, if you can’t do that, then it is better to partner with someone who has done that."

That didn’t always happen. Even when it did, lessons learned on earlier CSP plants were sometimes kept secret for proprietary reasons. As a result, the report states, "our observation is that too many lessons have had to be relearned as new plants are designed and built by new participants."

One hope, it concludes, "is that the next generation of developers will learn from what they did wrong."

Mehos said he believes that the "power tower" version of CSP combined with silicon cells will eventually produce cheaper electricity than fossil fuel plants. That’s because CSP could give the plant longer and cheaper energy and storage capacity, allowing it to operate in the evenings and early mornings when the sun’s power is relatively feeble.

CSP technology has spread to 12 countries including China, Morocco and the United Arab Emirates, and many of the newer plants are now operating reliably. "We just have to learn from past mistakes," Mehos added.