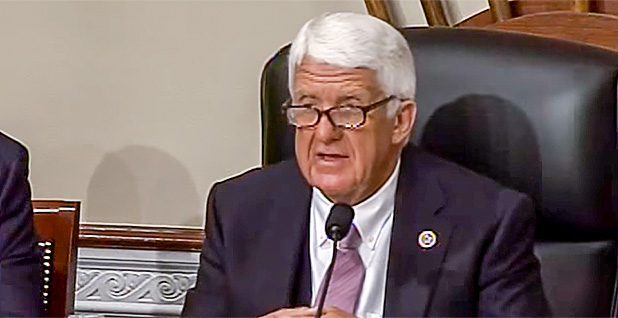 The Fish and Wildlife Service today backed "in general" a package of Republican-authored Endangered Species Act reform bills that critics contend would gut the 1973 law.

But in a sign of negotiations to come, the agency’s acting director advised lawmakers that certain "technical modifications" are still needed to meet specific concerns.

"In Western states, the law and certain species have become lightning rods for intense disagreement," acknowledged Fish and Wildlife Service acting Director Greg Sheehan, adding that "the administration is committed to making the ESA work for the American people."

Sheehan likewise voiced support for part of a bill, H.R. 1274, from Rep. Dan Newhouse (R-Wash.), that would require the Fish and Wildlife Service to consider all data submitted by state, local and tribal governments.

At the same time, Sheehan cautioned that officials wanted to "work with" lawmakers on a proposal also in Olson’s bill "to better understand how economic impacts should be appropriately considered" in deciding whether to list a species as threatened or endangered. His comment was an oblique way to raise concerns about the measure requiring the consideration of costs in listing decisions rather than later in the protection process.

Sheehan likewise raised doubts about a Newhouse bill provision that would automatically deem all state, local and tribal information to be "the best scientific and commercial data available" in guiding decisions. Sheehan said the provision would be a "significant departure from scientific integrity standards."

"My goal as the acting director of the service is for the organization to be a better neighbor and partner to the states," Sheehan told the House Natural Resources Committee.

Sheehan was previously director of the Utah Division of Wildlife Resources. It is not clear how long he will oversee the federal agency, as the Trump administration has not yet nominated a permanent Fish and Wildlife Service director or an assistant secretary for fish, wildlife and parks.

Utah Republican Rep. Rob Bishop, the chairman of the panel, convened the standing-room-only session as part of the committee’s ongoing scrutiny of the law. He noted that in the past four Congresses, the committee has held "more than 50" related hearings.

Getting legislation to the president’s desk has proved much trickier.

"It is my hope that, in coordination with our colleagues in the Senate and this administration, we can lay the foundation for ESA reform that creates better outcomes for both species and communities," Bishop said.

The committee’s senior Democrat, Rep. Raúl Grijalva of Arizona, countered that the "Endangered Species Act does not need congressional meddling to work better."

"These bills are an embarrassment and a waste of time," Grijalva said.

Jeff Corwin, identifying himself as a "wildlife biologist, author and television host," testified on how he has enjoyed "some amazing, intimate encounters with some of our world’s most threatened and endangered species." Corwin hosts ABC’s "Ocean Treks with Jeff Corwin."

But Rep. Jared Huffman (D-Calif.) noted that the WGA also recommended spending more on protecting species, while the Trump administration has proposed cuts in funding.

"We’ve got a disconnect there," Huffman said.

The committee also looked at H.R. 2603, from Rep. Louie Gohmert (R-Texas), to provide that nonnative species in the United States shall not be treated as endangered or threatened under the ESA. Other bills under consideration are H.R. 3131, from Rep. Bill Huizenga (R-Mich.), to adjust the hourly rates awarded to lawyers in ESA-related litigation, and H.R. 424, from Rep. Collin Peterson (D-Minn.), to require the Interior Department to reissue final rules to delist the gray wolf as a protected species in the western Great Lakes and Wyoming.