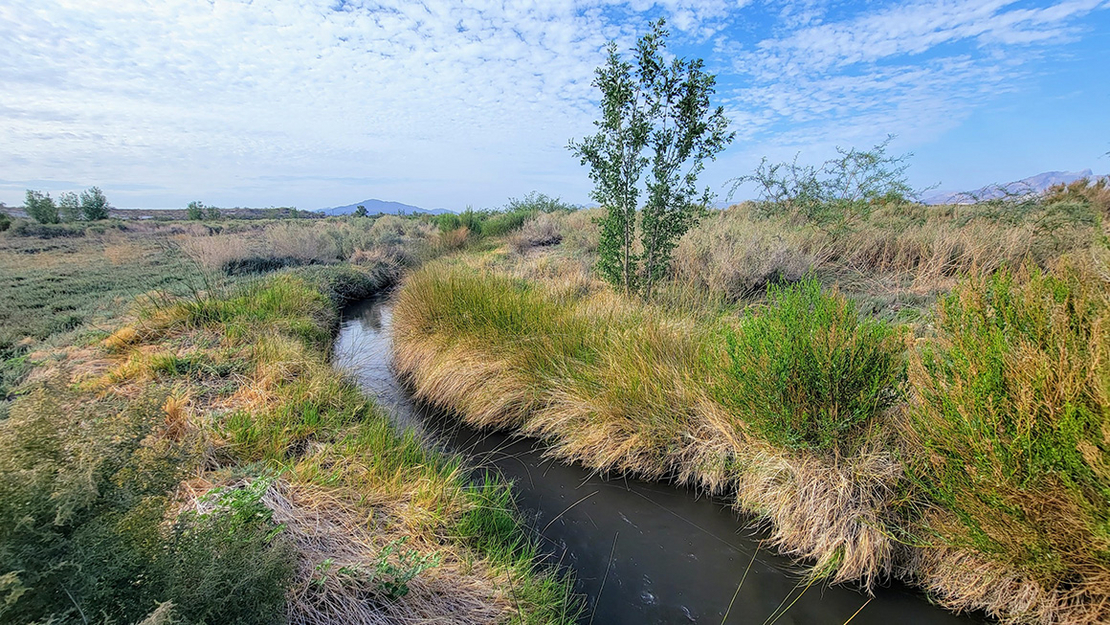 A Nevada landowner asserts he has no plans to comply with a new warning from the Fish and Wildlife Service that he stay out of the Ash Meadows National Wildlife Refuge, vowing instead to push ahead with a plan to reroute a desert stream through his property.

Victor Fuentes, who along with his wife, Annette, operates a 40-acre property dubbed Patch of Heaven, told E&E News on Wednesday that he will continue demolishing an earthen dam and dredging a channel on public lands. He began the work late last month.

“I’m not going to respond to any letter they send to me, if it’s not to put my water back. That would be the only solution for this problem,” Victor Fuentes said.

In an Aug. 4 letter, Desert National Wildlife Refuge Complex project leader Kevin DesRoberts informed the Fuenteses that they are barred from accessing the refuge lands to the north of their property, which is surrounded on all sides by federal lands.

“U.S. Fish and Wildlife staff will be restoring the land and wildlife habitat on the Refuge damaged by these actions, including repairing the breach in the Fairbanks Spring channel and backfilling the diversion ditch,” DesRoberts wrote. “To allow the land and habitat to recover, all entry to Refuge land north of your property is prohibited.”

The letter refers to efforts Victor Fuentes undertook on July 30 to “reopen” the Carson Slough and redirect water to his property. He had publicly announced his plans to raze an earthen dam at the refuge at a Nye County commissioners meeting last month (Greenwire, July 29).

The letter also reiterates a warning DesRoberts first issued in late July, citing the possibility of federal prosecution for trespassing under the National Wildlife Refuge System Administration Act, as well as violations of the Endangered Species Act (Greenwire, Aug. 4).

“If you or any party undertake additional illegal actions, the United States will take appropriate action, including seeking penalties and damages,” DesRoberts wrote.

The Fuenteses are locked in a yearslong dispute with the federal government over water rights in the Nevada desert — one that has played out in both federal court and Nevada’s Division of Water Resources.

Ministerio Roca Solida, a church founded by Victor Fuentes, purchased the property inside the refuge in 2006. At the time, a small stream flowed through the grounds and was used to fill a pool where baptisms were performed (Greenwire, April 23, 2018).

But that water disappeared in 2010 when FWS erected a diversion on the Carson Slough as part of a project to restore the area’s wetlands and safeguard the endangered Ash Meadows speckled dace.

Apart from a victory in 2016, when the Nevada Division of Water Resources ordered FWS to return a “historic use” flow of 0.003 cubic foot per second — or what one court ruling described as “equivalent to the flow of a garden hose” — the Fuenteses have faced defeat in their efforts to win back the stream.

That includes a 2019 verdict in the U.S. Court of Federal Claims, which found the federal government did not illegally seize the church’s water rights when it built the diversion (E&E News PM, Nov. 20, 2019).

The Nevada state engineer likewise denied an application in 2021 that would have granted the Fuenteses nearly 6,500 acre-feet annually, or the entirety of the Carson Slough.

In an objection to that application, FWS also asserted that a diversion channel the agency filled in 2011 — as part of its restoration work — had been “constructed illegally” in the mid-1980s.

Another application that would give the church rights to another 0.07 cubic foot per second, or about 5 acre-feet of water annually per 10 acres of land, remains pending before the state office. Both the Bureau of Land Management and environmentalists have objected to that request.

“I’ve got to take my time,” said Fuentes, who reiterated his belief that he is not violating federal laws but rather that he is safe-guarded by the Ditch Act of 1866, which recognized priority water rights in the West. “I don’t have the resources the government has.”

Fuentes asserts that the channel he is dredging predates modern water laws in the state, giving him the senior right over the federal government.

“My channel has been there ever since God created it, ever since the 1800s,” he said.

Both Victor and Annette Fuentes also allege that the pipeline FWS constructed to return their 0.003 cubic foot per second of water often fails.

“That pipe hasn’t worked at all from day one,” Victor Fuentes said, adding that his wife often saves fish from their property when the water dries up. “My wife is the one rescuing the fish all the time.”

The species she has rescued include mosquitofish and crawfish, Annette Fuentes said: “Every time that water stops, and it’s been continuously since 2017, the fish die.”

While FWS officials have framed the diversion as part of an effort to restore the area’s wetlands and protect endangered species and plants, Annette Fuentes accused the agency of ulterior motives as well.

“They need our property because they want to make that whole area marshland,” she said. “You see 40 acres in the middle of the watershed, in that marshland, that’s stopping them. They could have bought it, they didn’t.”

The Fuenteses assert that the federal government has made a handful of offers for their property, including a $350,000 proposal during their lawsuit that claimed the FWS diversion created flood conditions on their property, resulting in more than $3 million in damages.

“They devalued our land,” Annette Fuentes said. Court records show the church purchased the land for $500,000 in 2006.

“When they want your land, they’re going to come for it and they’re going to do whatever they can,” she said. “They were wrong, and they can’t get out of it because they would have to admit it.”

In a statement to E&E News, FWS Pacific Southwest Region spokesperson Jackie D’Almeida asserted that the agency “abides by Nevada water law and water rights appropriated by the Nevada State Engineer and will continue to ensure that the Fuenteses’ consistently receive appropriated surface water.”

In the meantime, the agency documented recent damage to the refuge lands.

The letter to the Fuenteses cited damage to “land and wildlife habitat, including breaching the physical structure of the Fairbanks Spring channel, excavation of a ditch in an undisturbed area, and diversion of water from the channel and away from aquatic habitat for the Ash Meadows speckled dace and Ash Meadows Amargosa pupfish, both of which are listed as endangered species.”

“We are working to determine next steps,” D’Almeida added. “We will continue to work with the private landowner and the State of Nevada as we seek a resolution to this matter.”