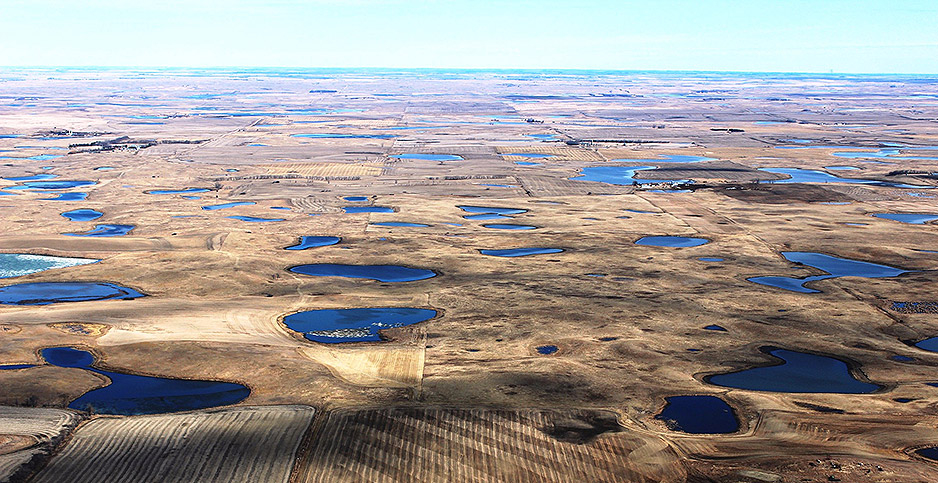 The Fish and Wildlife Service is easing its approach toward landowners whose drainage systems affect wetland easements. Lawmakers in the Prairie Pothole Region of the Upper Midwest, pictured here, have pushed for the change. USFWS Mountain-Prairie/Flickr

The Fish and Wildlife Service is easing some of the legal pressure on farmers who construct drainage tile systems that affect wetland easements.

Pressed by North Dakota lawmakers, among others, FWS issued an "internal guidance" memo yesterday that in part promises a cease-fire so long as farmers cooperate.

"In those situations where the landowner coordinates their tile planning with the Service, and adheres to Service-provided setback distances, the Service will not pursue legal action if it is later determined that the distances are inadequate to protect wetland areas from drainage," the memo states.

And while the federal agency says "legal action" may remain an option if a landowner does not follow service-provided setback distances and declines to provide wetland restoration, it promises "no legal action will be pursued until after the landowner is given the opportunity for administrative appeal."

"By working collaboratively and cooperatively with landowners, we can better achieve our mutual wildlife conservation goals," Bernhardt said in a statement yesterday.

There are over 28,000 wetland easements in the Prairie Pothole Region of North Dakota, South Dakota, Minnesota and Montana protecting over 1.5 million acres of wetlands, according to the Interior Department. The easements protect wetlands to provide wildlife habitat while allowing farming.

Funded through the duck stamp program, the easements compensate landowners who agree not to drain, fill, levee around or otherwise damage their wetlands. If wetlands dry up naturally, they can be worked.

When an easement is purchased, FWS advises landowners that placement of any structure that diverts surface or subsurface water away from the wetland area would violate the easement. Consequently, FWS noted that "landowners often seek clarity and certainty" before installing tile drainage systems.

"North Dakota landowners deserve the right to appeal assertions of wrongdoing and be provided safe harbor while the administrative process proceeds," Cramer said, adding that "this new Order also allows landowners to seek outside scientific expertise without fearing legal retribution."

In 2010, for instance, South Dakota farmer Kevin Jay Mast conceived a plan to install tiles to drain water from certain areas of his property in Brookings County, S.D.

The Natural Resources Conservation Service and FWS subsequently sent him two different maps to guide his work. Mast installed the drain tile in a manner consistent with the NRCS map but inconsistent with the FWS map. FWS took him to court (Greenwire, Sept. 17, 2019).

"He put in tens of thousands of dollars on this tile," defense attorney Gary Leistico said at an April 2018 hearing, a transcript shows. "I think he thought it was approved. He ended up being wrong."

A trial judge imposed a $100 fine and one year of probation. Last September, the 8th U.S. Circuit Court of Appeals threw out the conviction on the grounds that Mast’s state of mind should have been taken into account.

FWS Director Aurelia Skipwith said yesterday that the new guidance will "greatly improve clarity for landowners and will offer a clear process to help settle potential compliance concerns in a fair and timely manner."