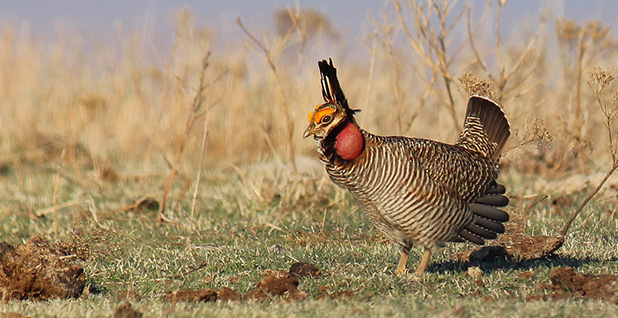 The Fish and Wildlife Service today moved one step closer to reinstating federal protections for the lesser prairie chicken.

The brown-and-white-striped grouse was removed from the list of threatened species earlier this year after a federal judge sided with the oil industry and overturned the rule protecting the bird. The judge determined that the agency hadn’t adequately considered state conservation efforts (Greenwire, July 19).

But less than two months later, a coalition of conservation groups asked FWS to issue an emergency rule listing the bird as an endangered species, arguing that some populations were in need of immediate federal protections to survive (E&ENews PM, Sept. 8).

In a notice to be published in tomorrow’s Federal Register, FWS has declined the groups’ request for an emergency listing of the sandsage and the shinnery oak prairie population segments.

At the same time, however, the agency has concluded that their "petition presents substantial scientific or commercial information indicating that listing the lesser prairie-chicken may be warranted."

The agency — which will soon be run by a more oil industry-friendly administration — is required by law to conduct a 12-month review of the prairie chicken’s status under the Endangered Species Act before determining whether another listing rule is warranted.

Conservationists argued in a press release that a new listing for the bird is already overdue.

"The lesser prairie chicken is in dire straits and needs the protections of the Endangered Species Act," said Jason Rylander, a senior staff attorney at Defenders of Wildlife, one of the groups that filed the emergency petition. "Now that the U.S. Fish and Wildlife Service has again acknowledged the bird may warrant protection, the agency must promptly relist the species and develop a far better strategy to conserve it on state and private lands."

Statements from top Republican lawmakers, however, expressed concern that the agency’s actions could undercut the Western Association of Fish and Wildlife Agencies, a coalition of state wildlife regulators leading the prairie chicken recovery efforts.

"It is important that we let the multi-state conservation plan have time to work before bringing down the full force of the Endangered Species Act," said Senate Environment and Public Works Chairman Jim Inhofe (R-Okla.), whose home state is one of five in which the grouse is found. "I am confident that the Trump administration is aware that state conservation is sufficient to protect the lesser prairie-chicken and I will work with the new administration to ensure local efforts are given the chance to work."

In the same notice, the agency rejected a request to list Arizona’s Verde four-nerve daisy and found that a petition to increase protections for leopards in sub-Saharan Africa also presented "substantial" information.

The request to reclassify African leopards from "threatened" to "endangered" was filed in July by the Humane Society of the United States and another animal welfare group.

The uplisting "would make it very difficult for American hunters to import trophies of these big cats in the future," the Humane Society noted at the time in a blog post.

The post was sharply critical of the president-elect’s trophy-hunting son.

"It is time to provide the same level of protection to the African leopard" that lions and elephants now have, the group wrote. "Donald Trump Jr., Honeywell CEO David Cote, and other over-privileged animal exploiters can use their wealth to entertain themselves in other ways and let these animals be."

How vigorously FWS will pursue the 12-month review of the leopard and prairie chicken during the Trump administration remains to be seen.