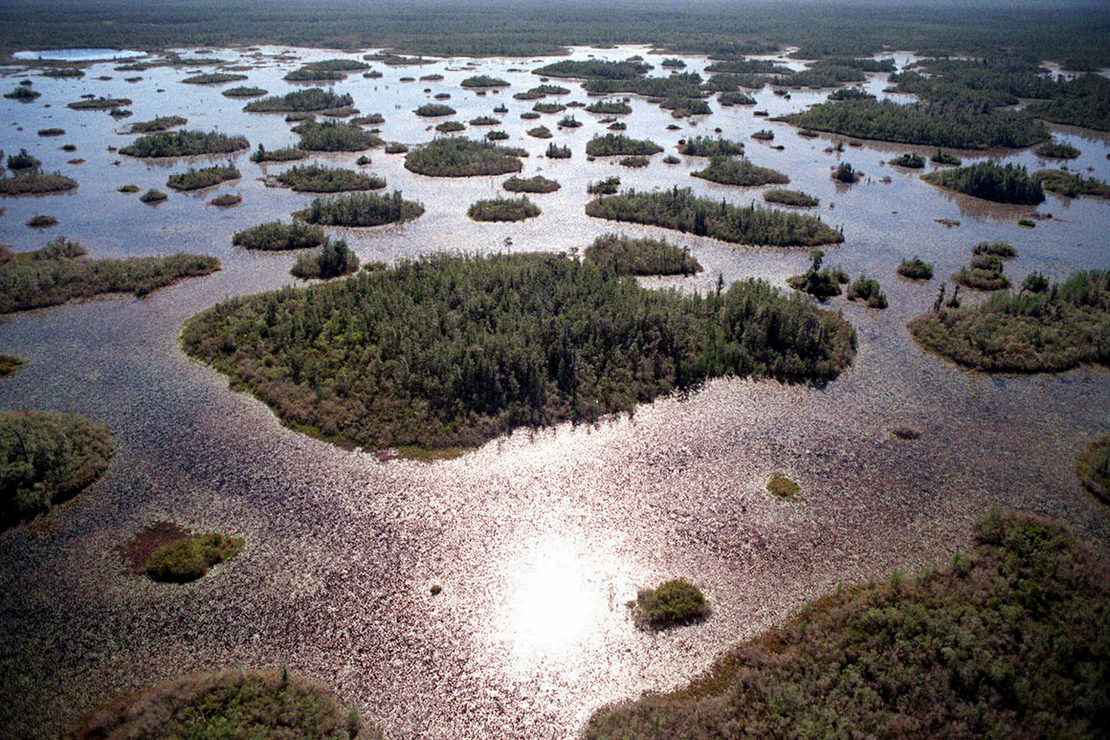 A file photo of the Okefenokee National Wildlife Refuge in southeastern Georgia. A proposed mine near the edge of the vast wildlife refuge in the Okefenokee Swamp has sparked controversy. Stuart Tannehill/The Florida Times-Union via AP, File

A titanium mining project is caught in the crosshairs of a fight over just how far the federal government’s reach extends under the Clean Water Act and what determines a “water of the U.S.,” or WOTUS.

The proposed Twin Pines titanium mine near the Okefenokee National Wildlife Refuge in Georgia caught a snag during the Obama administration, when the Army Corps of Engineers determined it would affect about 400 acres of swamp that were federally protected.

In the summer of 2020, EPA and the Army Corps made an about-face under the Trump-era definition of WOTUS, pulling back protections for myriad streams across the nation — including the Twin Pines project site.

The Army Corps in an October 2020 “jurisdictional determination” found that the roughly 400-acre area protected under the Obama administration did not, in fact, contain a WOTUS. That determination means the developer doesn’t have to — and isn’t — pursuing a permit to fill or dredge federally protected waters, a situation that some experts warn will leave the company legally vulnerable.

But now political pressure is growing for the agency to revisit that determination, just as the fight over the reach of the Clean Water Act heads to the Supreme Court and the Biden administration crafts a stricter definition.

Titanium has a proverbial ton of uses, from being an alloy combined with other metals like aluminum and iron to being processed and then used as a pigment in paint and plastics products.

But most titanium used in the U.S. is imported from African nations and Australia, because only one company produces it domestically — Chemours Co., a former subsidiary of chemical giant DuPont and the only titanium miner in the nation.

Amid the wetlands uncertainty, Chemours has made clear it wants nothing to do with Twin Pines. The company confirmed to E&E News it has no plans to acquire the mine or buy the titanium it produces for at least five years.

“We have no intention or plans, now and for the foreseeable future (the next five to ten years), of doing business with Twin Pines, including buying from the project or any titanium the project produces,” said Cassie Olszewski, a spokesperson for the company.

The five-year timeline is significant: In January, Sen. Jon Ossoff (D-Ga.) called on EPA and the Army Corps to further investigate the proposed mine, emphasizing that independent experts have expressed concerns about the mining process and groundwater withdrawals possibly altering the swamp’s hydrology (E&E News PM, Jan. 7).

Ossoff also called on the corps to reconsider its determination that no WOTUS were located at the site. That Army Corps determination is good for five years.

Both Georgia regulators and Twin Pines say the federal WOTUS determination wouldn’t have an effect on any permits issued for the Twin Pines mine.

Kevin Chambers, a spokesperson for the Georgia Department of Natural Resources, said that if EPA or the Army Corps revisit the jurisdictional determination for the proposed site, the move could affect water quality certificates.

“However, the state permits at issue would not be affected by a change to the jurisdictional determination,” he said.

Steve Ingle, CEO of Twin Pines, said in a statement Tuesday there is “no state role” in adjudicating the Army Corps’ determination.

“Suffice to say, we will continue to follow the direction of the regulatory authorities that have responsibilities for our project and adhere to Waters of the U.S. standards — as we have from day one,” Ingle said.

Ingle also said the Chemours decision had no bearing on whether the mine will be successful.

“We have no affiliation with Chemours and have never been approached about selling the mine to them. We have many customers to which we have supplied minerals in the past and look forward to doing business with them when the time comes,” the CEO said.

However, legal experts say the Twin Pines project could face lawsuits or federal enforcement if it chooses to push forward with no dredge or fill permit while relying on a Trump-era WOTUS definition that’s now defunct.

“If Twin Pines moves forward under the Trump administration WOTUS definition, they could be vulnerable to a citizen suit action alleging they are filling wetlands, as currently defined, in violation of the act,” said Ann Navaro, a partner at the law and advocacy firm Bracewell LLP. “EPA could also decide to attempt an enforcement action based on the current WOTUS definition.”

The Biden administration last year announced it was no longer implementing the Trump rule.

Last fall, the agency took the first step and formally moved to rescind the Trump-era rule and replace it with pre-2015 regulations informed by past court precedent (E&E News PM, Nov. 18, 2021). At the same time, EPA has been working to gin up a new definition of WOTUS that’s durable and protective, and has said a proposed rule could arrive later this year.

That process, however, has become more complicated given the Supreme Court agreed to take up a landmark case that could determine the reach of the Clean Water Act and what constitutes WOTUS (Greenwire, Jan. 31).

The Army Corps last month clarified that developers can no longer rely on determinations made under the Trump rule about which waters are jurisdictional when attempting to obtain new permits (Greenwire, Jan. 14).

Environmental advocates argue the agency’s guidance proves Twin Pines cannot rely on past decisions regarding federal jurisdiction, but that the company must instead use the Biden administration’s current interpretation. And that, they argue, would require the mine developer to obtain a permit from the Army Corps to dredge or fill federally protected waters.

“Because the wetlands are again jurisdictional under the current definition, Twin Pines could be subject to agency enforcement or a citizen suit under the Clean Water Act if it chooses now to dredge or fill them,” said Kelly Moser, senior attorney and leader of the Southern Environmental Law Center’s Clean Water Defense Initiative.

SELC late last year called on the Army Corps and EPA to reconsider its determination that the land in question contained no federally protected waters.

The Army Corps, they argued, hadn’t fully consulted tribes opposed to the mine when making its determination, and emphasized that the corps has since said the Trump-era regulation is inconsistent with the Clean Water Act.

SELC further urged the Army Corps to restore federal protection to almost 400 acres of at-risk wetlands at the proposed mine site, just as it had done in 2018 under the regulations that are once again in place today under the Biden administration.

“Because of the extreme harm posed by the wetland losses and other striking circumstances, we have also requested that EPA exercise its ‘special cases’ authority to revoke the October 2020 NJD,” the group wrote. “If the Corps declines to revoke the NJD itself, we ask that you support our request for designation by EPA of the mine site as a ‘special case.'”