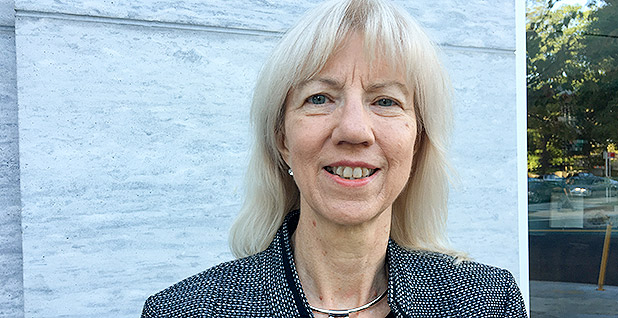 Former Interior Secretary Gale Norton flirted with both the Democratic and Libertarian parties before becoming a Republican.

The reason she ultimately picked the GOP: She liked Ronald Reagan.

Norton first worked at the Interior Department while Reagan was in the White House, and returned as its leader during the George W. Bush administration. She’s now living in her native Colorado, running her own consulting shop.

"It’s great. I get to choose the things that I’m interested in, so I get to do some interesting things without a lot of bureaucracy," she said in a recent interview. Right now, among other projects, "I’m working with people who are opposed to anti-fracking measures. It’s from the oil and gas industry perspective," she said.

Norton recently sat down with E&E News to chat about how she was influenced by the Sagebrush Rebellion, her support for Donald Trump, getting surrounded by grizzly bears in Alaska, and her dog named Liberty.

I grew up going to the Colorado mountains. I loved the outdoors. We lived a little north of Denver, and it was up on a hill, so you could look down over the Denver basin. When I was little, you could hardly see downtown because it was covered with a big cloud of smog. That got me thinking about environmental issues. Also in Colorado, the population grows so quickly that every time you get used to a field or a forest, pretty soon somebody’s building houses or a shopping center.

You were a libertarian. Was that your first political allegiance?

Actually, my very first election where I was really involved was the 1972 presidential election. I hosted the Democratic precinct caucus at my house. I didn’t stay a Democrat for very long. Once I figured out that somebody had to actually pay for all the government programs and that even well-intended laws often restrict people’s freedom, I became libertarian and eventually moved on to become a Republican.

Why did you become a Republican?

I was very impressed by Ronald Reagan. I went to work in the Reagan administration.

How did you get involved in public lands issues?

My early clients at Mountain States Legal Foundation included farmers and ranchers and cattlemen and a lot of other people who were very frustrated by heavy-handed federal control of local issues and lands. It really gave me a perspective, an understanding of that divide. It was originally the Sagebrush Rebellion. People were very frustrated because they felt that Washington bureaucrats were trying to run things from inside the Beltway and had no real understanding of what differences there were in Nevada or Idaho or New Mexico. That influenced me a great deal when I came to Interior. We really tried to use cooperative conservation and get our land managers involved in really working with local communities.

Would you call yourself an environmentalist?

Yes, certainly. I believe a great deal in conservation. I think that there are a lot of ways of trying to balance issues, trying to find common solutions. Too often, we view environmentalism as being all about confrontation. In reality, you can find some win-win solutions if you get people to work together.

Do you remember getting the call about the Interior job?

Oh, absolutely. I was sitting at my kitchen table, it was the day after Christmas, and I got a call from Karl Rove saying, "We’d like to have you come out and talk to us about Interior secretary." I was actually fairly calm throughout the process because I didn’t think I had a chance of actually getting the job.

It’s conventional wisdom that the Interior secretary should be a Westerner. Do you think that’s important?

I think it’s very important. People in the West really know about the Department of Interior; they’re directly affected by Interior. In the East, all they think about are the national parks. Those are very important, but they’re not representative of the other issues that Interior deals with. You have states that are a third or half controlled by the Department of the Interior. That’s a lot different than a state where one small area is a national park. Water issues are hugely important in the West because there are arid territories, and the importance of Bureau of Reclamation projects, that’s just not something people in the East understand in the same way.

Are you supporting Donald Trump?

I have signed up as a supporter. I’m on the list of Bush Cabinet officials that are supporting Trump. I have been more focused on the local issues.

Are you supportive of what you’ve heard from him on public lands?

Yes, I think that energy issues are a very important aspect of public lands and the Department of the Interior role. I know that’s something he has spoken positively about.

You were the first woman on that job. How important was that to you?

I was really pleased with the chance to be the first woman in that position. In the grand scheme of things, though, it doesn’t make very much difference in the way I approached the issues.

Do you remember a best day on the job?

It’s hard to pick. I had so many wonderful days. Being secretary of the Interior is great, because not only do you deal with important policy issues — as somewhat of a policy wonk, I enjoyed doing that — I also did everything from getting surrounded by grizzly bears in Alaska to visiting our island territories in the Pacific and the Caribbean to crawling through places in Carlsbad Caverns that even the park superintendent had never been to.

Do you consider yourself pretty thick-skinned?

Yes. When I was going through the confirmation process, there was one questionnaire I had to fill out that basically said, "In addition to all of the questions we’ve asked you above, are there any other deepest, darkest secrets we ought to know about?" And I basically said, "Yes, see attached news articles."

What is it like seeing your name in headlines that aren’t necessarily favorable?

It’s hard to be too cavalier about it. Sometimes I comforted myself with knowing people who were really paying attention knew what the reality was. Probably the most frustrating thing was that it was so hard to get coverage of anything positive. You restore a million acres of wetlands and announce that and you won’t get any coverage. Somebody says that 1 acre of wetlands was improperly destroyed, and that makes headlines.

You were influenced by Ayn Rand early on. What did you like about her?

I’ve become addicted to audiobooks. I just finished up a spy thriller: David Baldacci, "The Target."

I like anything that takes me to the mountains. My husband and I play golf. … We have a dog named Liberty. She’s a cocker-poodle mix. … She loves [hiking], but she attracts every burr and bit of dirt around.