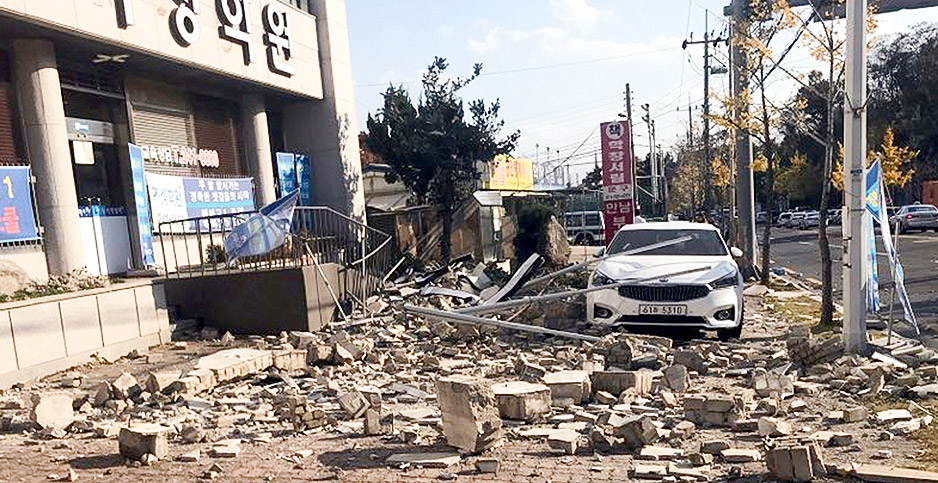 Debris from a collapsed wall is scattered in front of a shop after an earthquake in Pohang, South Korea, in November 2017. The 5.5 magnitude quake was triggered by enhanced geothermal power, according to a new study. Min Kyung-suck/Newsis/Associated Press

Scientists have linked a magnitude 5.5 earthquake to enhanced geothermal power, raising new questions about the safety of the emerging technology when the U.S. government and other countries are investing millions of dollars researching and deploying new systems.

The findings about last year’s disaster in Pohang, South Korea, were reported in two studies in Science yesterday and involve the largest quake by far tied to geothermal power.

"It was the largest and most damaging earthquake ever to have been associated with enhanced geothermal systems, making it a potential ‘gamechanger’ for the geothermal industry worldwide," said one of the two papers, authored by European scientists.

The quake — the most destructive in the country’s recorded history — injured at least 60 people and caused more than $50 million in damages. Previously, enhanced geothermal systems were linked to smaller quakes, but those were at least 1,000 times smaller in magnitude than what occurred in the South Korean city.

The November 2017 event also signals that injected fluid volumes much smaller than assumed can trigger a large tremor under the right set of conditions.

Enhanced geothermal, which some have called geothermal "fracking," was considered by some to be less prone to quakes because it typically uses lower volumes of injected fluid than traditional geothermal, according to Emily Brodsky, an earthquake expert at the University of California, Santa Cruz, who did not participate in the research.

"People should be concerned," Brodsky said. "We do not have a good protocol for knowing when a project is going to induce an earthquake versus not."

Unlike traditional geothermal operations, an enhanced geothermal system (EGS) taps heat from areas of deep rock underground where there is not permeability or an easy way to pull heat up to the surface.

With EGS, water is injected underground to open existing fractures in rock so the heat can be extracted. Similar to natural gas, the idea is to broaden geothermal’s use in areas that currently don’t have the right geography to pull heat up from the subsurface. The Energy Department has estimated that EGS in theory could supply about half of U.S. electricity, considering suitable public and private lands.

The studies released yesterday did not conclude definitively that the $38 million Pohang geothermal plant caused the quake, but they determined it was likely.

The disaster and its largest aftershocks occurred within 2 kilometers or less of the plant, according to the study from European researchers, which used satellite data. Additionally, the quake activity was detected at unusually shallow depths between 3 to 7 kilometers, suggesting the presence of an unknown fault, said Francesco Grigoli, a seismologist at Swiss Federal Institute of Technology (ETH Zurich) and lead author of the study, in an email.

The other paper, from South Korean researchers, reached similar conclusions, finding that the quake likely was caused by fluid injected at the EGS site. The team placed eight sensors in the Pohang area after detecting "foreshocks," or trembles before the larger event. The centers of the main quake and aftershocks were at the bottom of the injection well, they found.

There was little seismic activity prior to the start of water injections at the geothermal site, further indicating a link, the paper said.

Ole Kaven, a geophysicist at the U.S. Geological Survey, said the studies were "carefully done."

"While no project will ever be hazard-free, there are ways to reduce the potential for damaging earthquakes," said Kaven. Some advanced subsurface assessing technologies might have detected the fault, he said.

The Pohang quake was the second-largest in the country’s history since seismic records began in the late 1970s. Prior to the studies, the largest quake associated with enhanced geothermal, which was 3.4 in magnitude, occurred in Basel, Switzerland, in 2006.

The South Korean government currently is conducting an investigation of the quake’s cause with support from a team of international scientists. The company that operates the EGS site, NexGeo Inc., denied any link to the earthquake last year, according to the Korea Times.

The studies arrive as the Department of Energy is funding up to $10 million for 12 EGS research projects. Later this year, it is expected to pick a location for its planned Frontier Observatory for Research in Geothermal Energy (FORGE) site, which envisions scientists testing potential EGS breakthroughs.

In the United States, DOE has invested in five demonstration projects, three of which resulted in increased power production at existing geothermal fields, according to the Lawrence Berkeley National Laboratory. France and Germany opened the first commercial-scale EGS plants, and there have been significant investments in Australia, Europe and Asia.

In 2004, DOE developed a protocol for addressing induced seismicity with geothermal development, which all DOE-funded projects are required to follow. The protocol has been updated several times.

Yet, UCSC’s Brodsky said, current standards wouldn’t be enough to prevent all large quakes. She recommended that there be more controlled tests of induced earthquakes specifically.

That doesn’t mean that EGS development should be slowed, considering that most energy sources have multiple risks, she said.

Large earthquakes have been tied to injection of wastewater in hydraulic fracturing operations that extract natural gas, for example. There also have been warnings about the potential for earthquakes with large-scale injection of captured carbon dioxide underground (Climatewire, Nov. 15, 2013).

"All things have costs and benefits. It is well within society’s purview to decide that the earthquake risk is acceptable compared to the risk of global warming," she said.