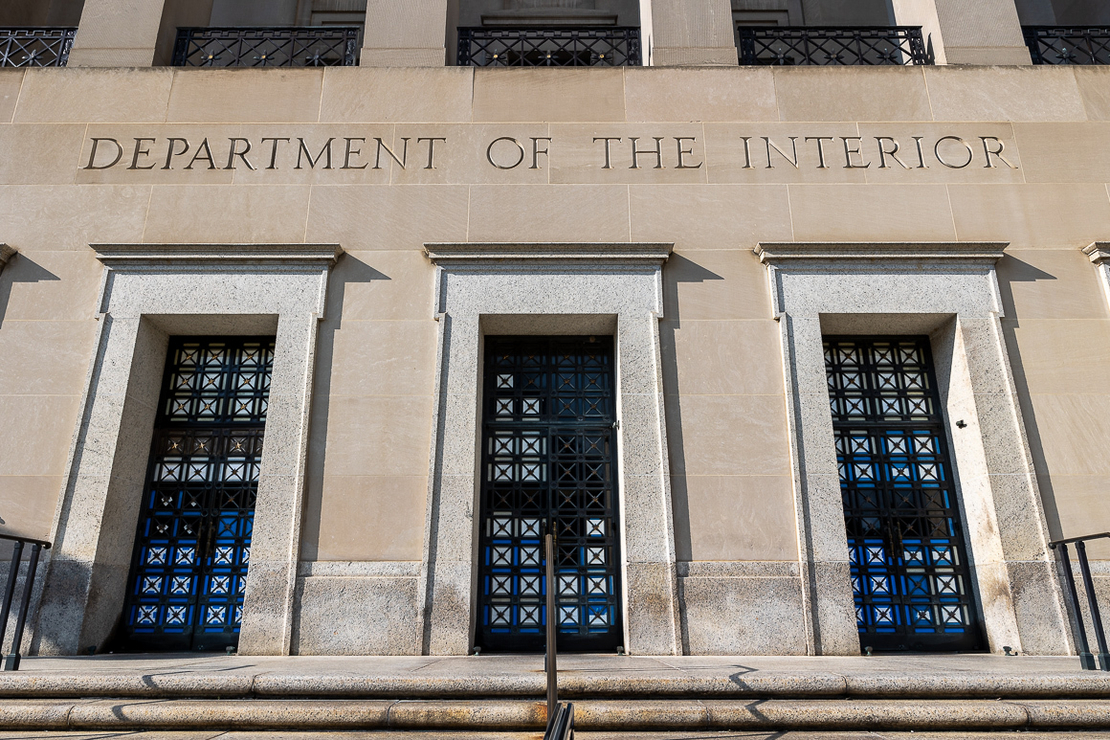 A recent GAO report criticized how the Interior Department during the Trump administration handled some of its grant decisions. Francis Chung/E&E News

While giving Interior largely passing grades for its handling of some $4 billion worth of grants issued between fiscal 2019 through fiscal 2021, the Government Accountability Office identified several recurring problems attributed to the Trump-era political shop.

In one case, for instance, U.S. Geological Survey staff told the GAO auditors that in fiscal 2018 an unnamed Trump administration senior adviser “failed to make” an award decision on one application, which involved research by a university on the impacts of climate change.

“USGS officials attempted to obtain information from the Senior Advisor regarding the status of the award decision,” GAO reported. “However, after receiving no response for an extended period, USGS officials said that they interpreted the … nonresponse as an effective denial of the award.”

As a result, the grant application that had been recommended by the review panel never received an award, unlike all of the other recommended applications.

In another case, auditors found that National Park Service leadership denied a grant award to one applicant recommended by the review panel in fiscal 2019 without providing a written rationale.

The recommended application was from a religious, civil rights organization proposing to conduct historic preservation activities.

“An NPS official stated that an executive within the NPS Director’s Office made the decision to substitute a lower-ranked application for the award because of a concern with the name of the applicant’s organization, and there was no rationale provided to support this decision,” the auditors recounted.

And in several cases involving the Fish and Wildlife Service, career agency staffers reported vexing complications with grants. The auditors subsequently identified 13 grant applications that were put on hold in fiscal 2019 without leadership providing a rationale.

Many of these thwarted applications had an international focus or were related to the conservation of animals, such as tigers and migratory birds.

The Interior Department agreed with the Aug. 23 report’s findings and recommendations.

A senior Interior political adviser was assigned the task of reviewing grants, including those above $50,000 for universities, land acquisition purposes and nonprofits that can engage in advocacy.

The screening was intended to “better align” Interior funding with Interior Secretary Ryan Zinke’s “priorities,” according to the memo. This “elevated review” was discontinued in 2021.

The GAO auditors in the new report noted they found email communications from FWS grant staff over a period of several months, in which they were attempting to gain approval for the recommended applications. The staff did not receive responses.

FWS officials told auditors that “it was unclear“ why Interior did not award grants to certain applicants, despite approving awards for other applicants within the same grant programs. FWS officials told GAO that they were not given an opportunity to discuss the issue with leadership.

“However, according to FWS officials, it appeared that the Senior Advisor, in particular, closely scrutinized applications focused on certain topics, such as endangered species and climate change, rather than considering the merit of individual grant applications or program policy factors,” GAO stated.

FWS officials added that “in many cases, grant program officials withdrew their request for an award decision because it was apparent that management had effectively denied the recommended awards.”

Interior did not dispute GAO’s findings and concurred with the watchdog’s recommendations. FWS will issue by the end of October a memorandum “reinforcing the need” for publishing grant criteria and for using this criteria in grant decisions.