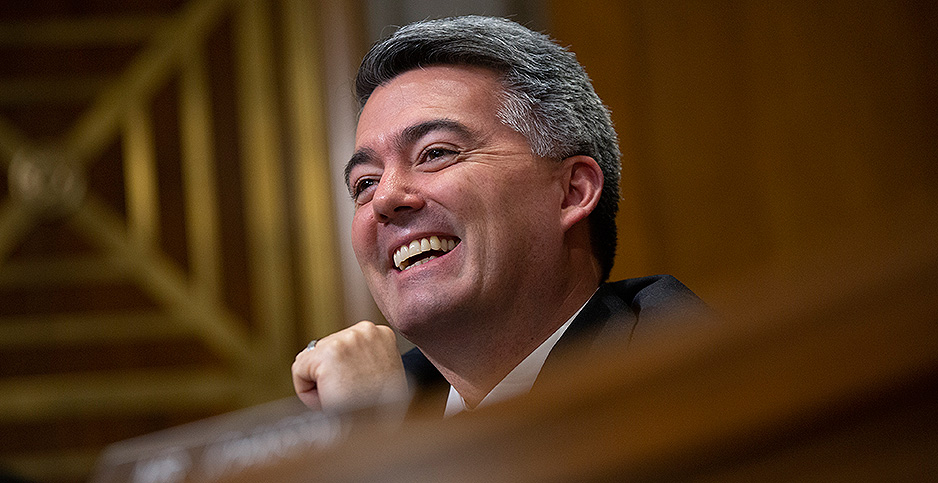 Sen. Cory Gardner (R-Colo.) calls himself the "chief architect" of the Bureau of Land Management's move out West. Stefani Reynolds/CNP/Polaris/Newscom

Sen. Cory Gardner christened himself the "chief architect" of the Bureau of Land Management’s controversial relocation to Grand Junction, Colo. But has it built a solid foundation for his reelection bid next year?

The Colorado Republican, who won his first Senate term in 2014 by knocking out Democratic Sen. Mark Udall, is seeking another term in the Centennial State.

While Democrats have yet to select a challenger — former Gov. John Hickenlooper and former state House Speaker Andrew Romanoff have locked horns for their party’s nod — Gardner is expected to face one of the toughest reelection contests this cycle.

The Cook Political Report lists the Senate seat as a "toss-up," its most competitive rating (E&E Daily, Dec. 20).

In the run-up to his bid, Gardner has seized on BLM’s relocation, a seemingly bureaucratic issue, to demonstrate his influence with the Trump administration, his commitment to the rural West and his distaste for the Washington "swamp."

"I certainly think this is going to be a great accomplishment that Cory will be able to talk about throughout the campaign," said Dick Wadhams, former chairman of the state GOP.

While Wadhams acknowledged that BLM itself may not be among most voters’ top-tier concerns in the 2020 cycle — if ever — the headquarters move can serve as a symbolic achievement.

"Starting to move federal land managers out of Washington, D.C., out into the country where their decisions affect communities, and small businesses, and ranchers and farmers, I think that is a strong item for Cory to talk about in this campaign. It’s very substantive," he added.

Gardner first raised the issue at a 2016 Senate Energy and Natural Resources hearing, during which he and other lawmakers expressed "grave concerns" over the Obama administration’s planned overhaul of BLM’s land-use planning process.

"We were looking at a map here about the BLM, the public lands in the western United States. Do you think it’s time that we move the BLM headquarters to the western part of the United States?" Gardner asked then-BLM Director Neil Kornze. The agency manages 245 million acres, largely in 10 Western states.

According to a transcript of the hearing, Kornze replied: "I would be open to that conversation."

When President Trump took office in 2017, Republicans would go on to successfully snuff out BLM’s "Planning 2.0" rule, and Gardner would renew his bid to push BLM’s top officials — about 500 of the 10,000 individuals who work for the agency — to the West.

"I’ve always told Coloradans that one thing we need to do is have more Colorado in Washington and less Washington in Colorado," Gardner told former Interior Secretary Ryan Zinke at Zinke’s nomination hearing in 2017. "But one of the things I think we could do is maybe take a little bit of Washington and make it less Washington. Perhaps, we can cure some agencies like the BLM of Potomac Fever by moving them out of Washington."

Although most BLM employees are already based in offices outside the Beltway, Gardner contended that breaking apart the headquarters would prompt more favorable politics "for ranchers, for landowners, for energy producers, for constituents who enjoy these lands."

House Democrats have criticized Interior Secretary David Bernhardt’s decision to proceed with BLM’s relocation to Grand Junction — as well as scattering other top officials across offices in Arizona, California, Idaho, Nevada, New Mexico, Oregon, Utah and Wyoming. They assert that the move is a step to weaken and eventually dismantle the agency.

But observers in Colorado say Gardner’s ownership of the plan could nonetheless be useful in appealing to independent voters.

"Anytime that you’re looking at changing the culture and bringing some of Washington back to the West, that’s something that’s been hailed by Republican and Democrats for decades, to actually be able to see someone do it, that’s a big deal," said Matt Dempsey, a Denver-based oil and gas consultant.

He added: "It shows that Senator Gardner was able to work across the aisle on energy and natural resource issues in a way that got results."

In early 2018, Bennet and Gardner co-signed a letter to Zinke pushing Grand Junction and touting its central location to major interstates and the city’s "expanding airport" (Greenwire, May 11, 2018).

But Bennet, a long-shot contender for the Democratic presidential nomination, has scaled back his enthusiasm for the relocation amid reports that as many as 80% of BLM employees are unlikely to agree to relocate. A spokeswoman said he believes Interior’s planning process is "flawed" (Greenwire, Dec. 12).

The reorganization plan will also bring fewer jobs to Grand Junction than initially anticipated, topping out at 40 posts, rather than the 80 employees rumored earlier this year.

"It’s a case of be careful what you wish for: Anyone familiar with this administration’s track record would have been able to predict that things were not going to go well," Center for Western Priorities Deputy Director Aaron Weiss said.

Referring to the relatively small number of jobs the relocation will create in Grand Junction, Weiss said: "It’s unclear if it was Cory Gardner who was sold a bill of goods, or if he was intentionally misleading [voters] right off the bat."

Still, Dempsey argued that the issue could play well among voters along the state’s Front Range, its population center. The region is home to the Denver Federal Center in Lakewood, the largest concentration of federal employees outside the Beltway.

"The importance of federal employees in this part of the state is well-understood and appreciated," Dempsey said.

In a July editorial praising the decision as a "quiet victory for Colorado," the Colorado Springs Gazette asserted that BLM employees had "won the geographic lottery."

"Gardner was not alone in making this happen, but he initiated and led the fight," the newspaper wrote. "Gardner’s crusade created a rare comradery among Colorado Democrats and Republicans, as they worked together toward the goal of dredging from the swamp what belongs in the West."

Before Gardner anointed himself the "chief architect" of the BLM relocation earlier this year, he raised the issue repeatedly with Interior Department officials, often in public hearings.

Although a timeline of his efforts released by the senator’s office states he met "publicly and privately" with "top Interior Department officials," a Gardner spokeswoman declined to share additional details about those meetings.

"From the very beginning moving the BLM’s headquarters West has always been about strengthening the BLM’s relationship with local officials, moving the decision makers closer to the lands they oversee and the people they serve, and making better land management decisions," Gardner said in a statement provided by his office.

But Gardner appeared to be given the green light from the Trump administration to break news on the BLM plan — such as a July video announcing Grand Junction’s selection — ahead of the Interior Department itself.

Still, when asked to describe Gardner’s role in the decision to relocate BLM’s headquarters, Interior spokeswoman Melissa Brown instead credited an array of individuals.

"The department greatly appreciates the bipartisan support we’ve received from officials like Senator Gardner and Governor Polis as well as the Colorado community who recognize the value the move will bring to Colorado," she said.

Polis, a former House lawmaker who represented Boulder, likewise differed when asked if he agreed with Gardner’s description of himself as "chief architect."

"Members of the Colorado delegation worked together and the Governor played a role in this process while serving in Congress and in his current role," said spokesman Conor Cahill.