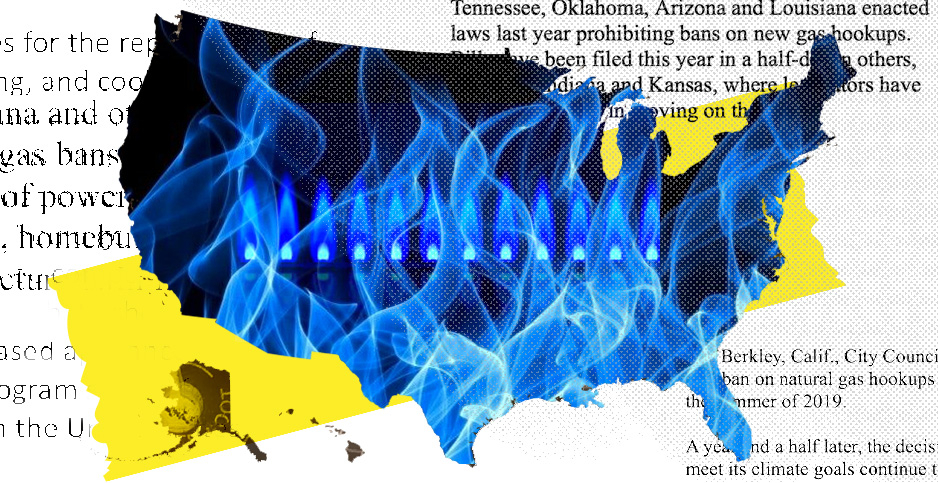 The Berkeley, Calif., City Council passed the nation’s first ban on natural gas hookups for new buildings in the summer of 2019.

A year and a half later, the decision to help the city meet its climate goals continues to reverberate across the country.

Now, Republican-led states in the South and Midwest — many of them gas-producing states — have moved swiftly to preempt local governments from following suit.

Tennessee, Oklahoma, Arizona and Louisiana enacted laws last year prohibiting bans on new gas hookups. Bills have been filed this year in at least 10 others, including Georgia and Florida. Texas Gov. Greg Abbott (R) said that he supports legislation to outlaw bans on gas appliances

In Indiana and Kansas, legislators moved swiftly to block cities from enacting gas bans despite the fact that none has been proposed.

"My stance is: Let’s get in front of it," said Indiana state Rep. Jim Pressel, a Republican sponsor of legislation, during a state House Utilities, Energy and Telecommunications Committee meeting last month. "I like to refer to it as ‘ban the ban.’"

In Indiana and elsewhere, bills have drawn support from a variety of powerful business interests, including petroleum producers, utilities, homebuilders, chambers of commerce, manufacturers and restaurant associations. In Indiana and Kansas, the AARP is also on board.

In some states, the bill’s chief sponsor has direct ties to groups pushing for preemption. In Kansas, legislation was proposed by the committee itself under its Republican chair, Sen. Mike Thompson, a former television weatherman who serves as a policy adviser to the conservative Heartland Institute and disputes mainstream climate science.

Their chief message: Heating with natural gas is more affordable than relying on electricity — a point challenged by environmental advocates. The gas industry and environmentalists also dispute the climate and public health benefits of phasing out gas space heating.

While outlawing so-called gas bans is self-preservation for utilities, it’s also political pushback against liberal cities taking steps to combat climate change. Deep-red states like Kansas and Indiana are fertile ground for criticism of energy policy that emanates from California.

"This is preventing Green New Deal-style energy policies on the local level," Elizabeth Patton, the Kansas state director for Americans for Prosperity, told members of the Kansas Senate Utilities Committee.

On both sides, there’s a concerted effort to frame the issue as a matter of preserving choice.

Those pushing to stop gas prohibitions, which often feature similar language from state to state, argue that they’re defending the rights of consumers to choose what energy source they use to heat their homes. Indiana legislators, however, punted on an amendment to prohibit homeowner associations from outlawing rooftop solar installations.

Advocates for electrification, meanwhile, say prohibiting cities from limiting or banning new gas infrastructure is eliminating the choice of local governments to pursue policies on behalf of residents.

Henchen said the notion that homebuyers get to choose their heating fuel in the same way they choose a paint color is overstated. And while federal data shows natural gas is cheaper for home heating today because consumers who rely on electric space heat are using less-efficient furnaces, the same is not true for new construction.

The Rocky Mountain Institute issued a report last year showing that relying on electricity for heating buildings is both cleaner than gas and cheaper, regardless of geography.

"Across seven different cities around the country, we found a consistent result that building all-electric saved costs: save cost upfront and saved on total cost over a 15-year period," Henchen said.

The biggest source of savings, the group said, is upfront: It’s cheaper to install a heat pump for both heating and cooling in a new home than to install a separate air conditioner and gas furnace, as well as the gas piping. The cost of running space heating equipment can vary slightly by geography, but on a national level is roughly equivalent, Henchen said.

Richard Meyer, managing director of energy analysis for AGA, said the group isn’t actively coordinating support or lobbying for gas ban preemption bills at the state level. But it is carefully tracking the issue and serving as a resource for member companies.

"What AGA is trying to do in some of its analysis is making sure we are articulating all the different costs associated with policies that would force electrification," he said.

While policies in Berkeley and a few dozen other cities focus only on new construction and some local policies have exemptions to make sure they’re not burdensome, Meyer said electrification advocates are clear that outlawing new gas hookups is only the first step in an "electrify everything" agenda. The eventual goal is replacing existing gas infrastructure.

"Sometimes those costs can be hard to quantify. But that doesn’t mean they’re any less real," he said.

Weighing all of the economic and environmental costs and benefits of converting large new swaths of the economy to run on electricity is a huge challenge.

The National Renewable Energy Laboratory last month published results of a multiyear study on impacts of widespread electrification. Among the findings: A "high electrification scenario" requires a doubling of electric generation capacity in all U.S. regions.

The study concluded that widespread electrification would lead to only a modest increase in wholesale power prices, from $40 per megawatt-hour to $46. The estimated impact on total energy system costs varied more widely and is dependent on technology and costs of end-use equipment.

The NREL study also concluded that while electrification would reduce gas use in buildings, doing so would depress gas prices and, absent policy changes, lead to increased use of the fuel for power generation — another front in the broader battle between climate activists and the fossil fuel industry.

Still, researchers said that even with an expansion of natural gas-fired generation, electrification would lead to an overall decrease in energy sector-wide emissions.

Alejandra Mejia Cunningham, a building decarbonization advocate for the Natural Resources Defense Council, said making deep cuts to existing levels of carbon pollution is akin to digging out of a huge hole. And continuing to invest in new gas infrastructure is only making it deeper.

"Step one is to stop digging the hole," she said.

In California, few cities have adopted outright bans on new gas infrastructure. Some ordinances include exemptions for cooking appliances and fireplaces. Others exempt restaurants or promote all-electric housing by requiring higher efficiency for mixed-fuel buildings.

Cunningham argues that cities elsewhere across the country ought to have the same ability to set policy.

"What works in Lawrence, Kan., isn’t going to work in Atlanta, and the other way around," she said.

While bans on new gas hookups are aimed at helping chip away at a global problem — climate change — debate over the policies exposes a more localized power struggle between state and city governments.

In Kansas, a target of the natural gas preemption bill is Lawrence, the home of the University of Kansas, which is among more than 100 U.S. cities with 100% clean energy goals.

Lawrence’s mayor is among the local officials who oppose the preemption bill because they say it encroaches on home rule authority, or local control, adopted by Kansas voters in 1960.

"Cities don’t have an incentive to drive away residents or to drive away businesses," he told senators. "That’s the antithesis of a city. They want people there. They want to have a growing and thriving community."

Nationally, preemption legislation has become an increasingly used tactic by state legislatures to tie the hands of local governments, according to researchers at New York University.

"There is a huge uptick," said Jennifer Pomeranz, an assistant professor of public health policy and management at NYU’s School of Global Public Health and lead author of a study on preemption bills last year.

"A lot of it comes down to the underlying and rising tension between business and public health," she said. "I think these industry groups have come to realize that these preemptive bills are a way to avoid regulation."