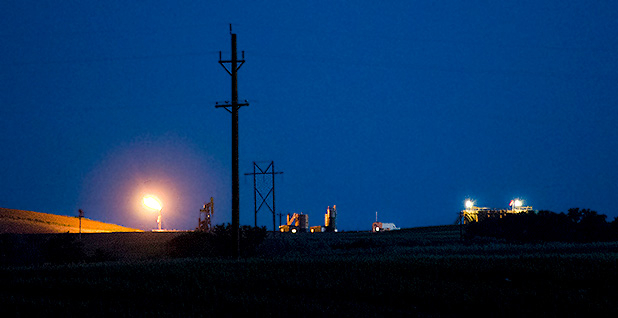 Gas flaring in North Dakota’s Bakken Shale oil field has been creeping back up, blunting the state’s efforts to tame a problem that came to symbolize the excesses of the oil boom.

The volume of gas burned in flares reached 222 million cubic feet a day in June, a 31 percent increase from the same month last year, when the volume was 170 million cubic feet. That’s still far lower than the peak in 2014, but critics said the turnaround shows the limits of North Dakota’s industry-friendly regulations.

The flares release carbon dioxide and raw methane, both of which contribute to global climate change. Methane from flares is the biggest source of greenhouse gas emissions from North Dakota’s oil and gas sector, according to the Environmental Defense Fund.

"What we can do about it is not issue a permit to drill until there is some place for the gas to go," Morrison said. "Other states have figured it out. I’m not sure why North Dakota can’t figure it out, too."

The publicity led then-Gov. Jack Dalrymple’s (R) administration in 2014 to pass regulations aimed at limiting flaring by 2020, and the oil industry invested billions of dollars in infrastructure to move the gas to market.

The state Industrial Commission, which the governor leads, set a goal of reducing flaring to 10 percent of total gas production and later reduced the final level to 9 percent. The state also required companies to submit plans for how they’ll capture gas when they apply for an oil well permit (Energywire, July 2, 2014).

"The planet doesn’t care what percentage of gas you’re wasting — the planet cares about the volume," said Dan Grossman, director of state programs at the Environmental Defense Fund.

"Hopefully the Industrial Commission learned from the last boom cycle to be proactive so that it doesn’t get away from us again," said Wayde Schafer, the North Dakota organizer for the Sierra Club.