Gas for coal? Debate rages on as electric companies invest. 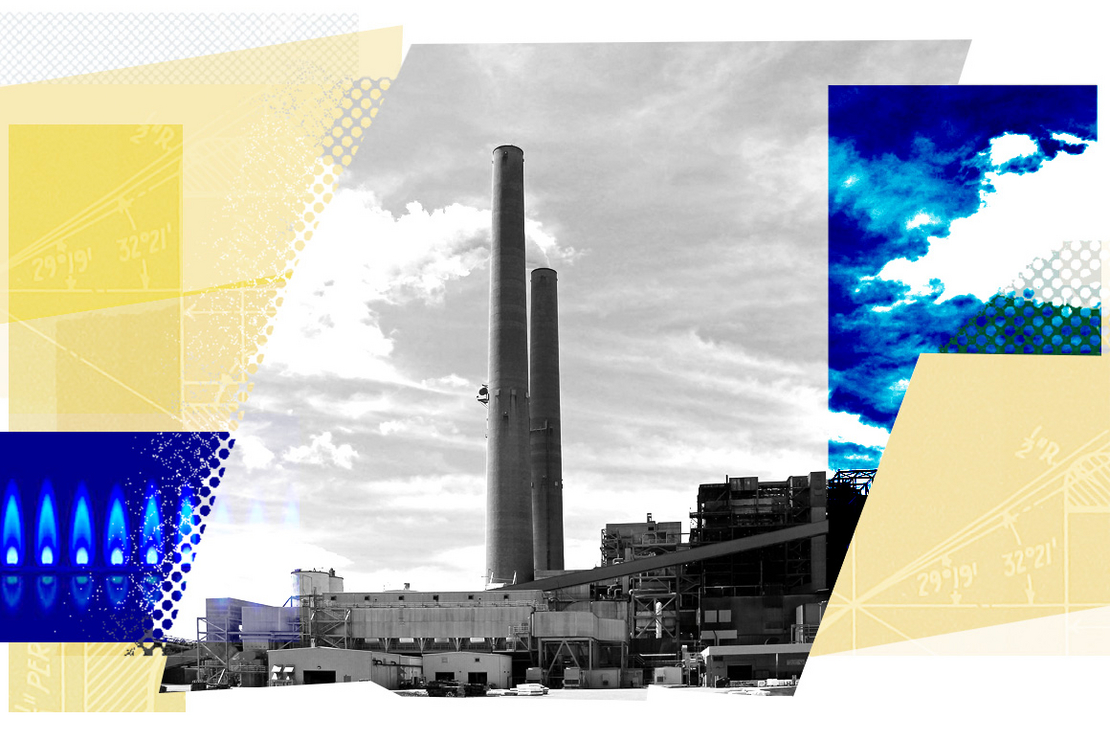 Some of the largest coal-burning power plants in the nation are being fast-tracked for retirement and replaced in part by cheaper, cleaner renewable energy — a trend that should accelerate following enactment of landmark federal climate legislation.

But in saying goodbye to coal, utilities like DTE Energy Co. and AES Corp. are proposing new fossil fuel investments they insist are essential for reliability at a time when electric generation is increasingly dependent on weather.

DTE plans to exit coal entirely years earlier than planned — in 2035 — and it wants to retrofit one its coal plants, the 1,300-megawatt Belle River plant near Detroit, to burn gas. In Indiana, AES wants to repower coal units totaling 1,052 MW at its Petersburg plant in similar fashion.

Power industry officials say the projects don’t conflict with achieving long-term climate goals. In fact, they say swapping gas for coal by itself equals a huge carbon reduction and some argue gas will help integrate more wind and solar more quickly than could be accommodated otherwise.

“The fastest way to a low-carbon future is actually more gas not less in the short run,” Clair Moeller, president of the Midcontinent Independent System Operator, which operates the bulk power grid across 15 states, told a recent conference of utility regulators. Longer-term, he said, those gas plants are “an insurance policy.”

Not everyone agrees that fossil fuel additions are compatible with the science of avoiding the worst consequences of climate change.

“The imperative to get to net zero by midcentury is kind of the main driver for why we really want to restrict investments in new fossil generation of any kind,” said Mike O’Boyle, director of electricity at Energy Innovation, a think tank. “Obviously, natural gas is a better alternative than coal. But the ship has sailed on new coal. It's really all about whether we can afford to build new gas. I don't think we can."

Many of the utilities making new gas investments are the same ones that established net-zero carbon emissions goals.

Among them is Entergy Corp. It views gas as a key piece of its generating portfolio for years to come, said Entergy Louisiana CEO Phillip May, addressing the National Association of Regulatory Utility Commissioners’ annual meeting in Entergy’s hometown of New Orleans last month.

“We know it’s going to take an all-of-the-above approach to meet our climate commitments,” said May, touting the utility’s 2050 net-zero goal.

In Louisiana, he said, Entergy is adding hundreds of megawatts of solar and recently signed a memorandum of understanding to explore the potential for offshore wind in the Gulf of Mexico.

But gas will play a key role for Entergy Louisiana and, especially, its industrial customers who make up more than half of electricity sales and have unique needs that can’t be easily met with renewables, May said.

May cited one industrial customer that needs power to start a 110,000-horsepower motor.

“The reality is it's just not practical to start that with renewable energy,” he said. “You need rotating mass to make that happen. Because of that, I see natural gas as part of our generation mix and continuing to be part of our clean energy future well into the future.”

MISO’s Moeller likewise said natural gas-fired power is critical to ensuring reliability as renewables become an increasingly larger part of the region’s energy mix, adding that how natural gas is used as a power resource will change over time.

That change is reflected by gas plants’ capacity factors or how often they run. A U.S. gas fleet that averages 50 to 60 percent today will likely run less than half as much in the future, mostly during peak hours.

“I won't be able to tell you when I need the gas, but it’s going to be the most important fuel I have,” Moeller said.

Most of the proposed projects are in or near gas-producing areas like Appalachia and Texas, and they’re mostly being built by independent power producers in deregulated states such as Ohio and Illinois, so they don’t need approval from utility regulators. If plants turn out to be money losers, it’s the investors — not consumers — on the hook.

Others face scrutiny by regulators who must decide if new gas investments are the cheapest and best way to keep the lights on and air conditioners running.

That’s where the state utility commissions come in — the ones Moeller and other industry executives addressed last month at NARUC’s annual meeting.

While regulators greenlighted some new projects, others were rejected or withdrawn.

Arizona regulators voted against Salt River Project’s proposed 820-MW expansion of an existing gas plant in the face of warnings that doing so would jeopardize electric reliability and hamper efforts to integrate more renewable energy (Energywire, April 15). SRP is appealing the decision.

In Minnesota, Xcel Energy Inc. last year withdrew plans for an $800 million gas plant at the site of its Sherburne County coal plant outside the Twin Cities and later agreed to defer an alternate proposal to add two new smaller gas plants while it considers whether zero-carbon resources can meet the utility’s need for 800 MW of “firm dispatchable” resources later this decade (Energywire, Feb. 9).

Stephen Martz, vice president of integrated resource planning for Xcel, which operates utilities across eight states, said the company has a “firm pathway” to meet its goal of reducing carbon emissions 80 percent by the end of this decade compared with 2005 levels.

Xcel is “fortunate” to operate in areas like the Upper Midwest, Colorado and the Southwest where it has access to bountiful renewable resources” that has helped the company slash carbon emissions while maintaining reliability and affordability, Martz said in an interview.

But he doesn’t view future investments in natural gas for reliability as inconsistent with the company’s climate goals.

“Certainly, gas is something that we're interested in talking about,” Martz said. “I do think that there's a long-term future there as well."

“Our goal is to lay out a no regrets strategy pathway,” he added, explaining that seldom-run gas turbines needed today could be converted to burn hydrogen or add carbon capture technology.

Xcel is involved in numerous industry partnerships and research and development efforts such as the Low Carbon Research Initiative, originally developed by the Electric Power Research Institute.

Energy Innovation’s O'Boyle said gas is a mature technology and can’t be ruled out as a technology choice when it comes to providing dispatchable energy during hours of the year when there’s not enough renewable generation available.

“But it’s not the only one,” he said, calling short-duration battery storage a “vastly underutilized, relatively mature resource.”

O’Boyle points to what unfolded in California a few months ago as an example. A record heat wave in the West stressed California Independent System Operator’s (CAISO) bulk power grid.

But unlike two years earlier when hundreds of thousands of people lost power amid rolling blackouts, the state avoided outages during record peak in power demand on Sept. 6. It was helped by 3,500 megawatts of battery storage added during the previous two years, according to a report by CAISO.

O'Boyle said utilities in some other parts of the country aren't deploying battery storage as aggressively as they should.

“If you look at the utilities that are proposing to go big on natural gas in investor-owned or monopoly service territories, … those utilities aren’t proposing — or they don't seem to be examining — battery storage as a meaningful contributor to reliability,” he said.

In Michigan, one of the battlegrounds for new gas investment, the Public Service Commission’s review of DTE’s 20-year energy plan is just beginning.

James Gignac, senior Midwest energy analyst for the Union of Concerned Scientists, said clean energy groups will engage experts and review DTE’s plan to determine if they see a pathway for the utility to accelerate an exit from coal without adding new fossil fuel investments.

“DTE has plans to add a significant amount of solar and batteries,” he said in an interview. “But a lot of that is in the later years of its 20-year plan. So is there a possibility they could speed up those investments.”

That’s especially true, Gignac said, in the wake of President Joe Biden signing the Inflation Reduction Act, which provides hundreds of billions of dollars of new and expanded tax incentives for carbon-free energy.

Clean energy groups want to test DTE’s proposal, which is based on more than 100 modeling runs under different scenarios and assumptions, to see if other solutions such as expanded transmission access, energy efficiency and distributed energy — or a portfolio of zero-carbon resources — could meet the utility’s needs.

But environmental groups said the power sector needs to slash emissions as aggressively as possible to help other harder-to-decarbonize industries such as transportation do the same.

“The question we're looking at is: is there a better way to invest that money in nonemitting resources versus making that investment in a fossil fuel technology?” said Gignac.