Gas group CEO on flirting with a presidential run, ‘fracking’ 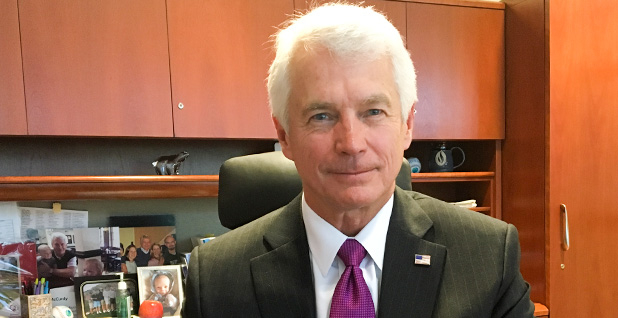 Dave McCurdy got fired from his first job as a grocery bagger.

It wasn’t that he was doing a bad job, he said, but they found out he was only 14 and too young to be working. He’s since worked at gasoline stations on Route 66, loaded flour bags into boxcars and was Oklahoma’s assistant attorney general. He went on to serve in the U.S. House for 14 years as an Oklahoma Democrat, including a stint as the chairman of the Intelligence Committee. He’s been the head of three major industry trade groups, including the Electronic Industries Alliance and Alliance of Automobile Manufacturers.

Since 2011, McCurdy has been president and CEO of the American Gas Association.

He recently sat down in his Washington, D.C., office with Greenwire to discuss his flirtation with a presidential bid, the note he wrote to Saddam Hussein on a bomb and his dislike of the word "fracking."

You were born in Canadian, Texas. Tell me about Canadian.

I can almost tell you nothing about Canadian, Texas. My mom and dad … got into flying during the era of post-World War II, and they got into it so much they decided that he would become a crop duster, so they moved to Canadian, Texas, like 60 miles inside of the Texas border. And he was a crop duster, and my mom actually gave flying lessons. She gave a flying lesson the day I was born. They’re both tough. … We moved back when I was 6 months old, back to Oklahoma. I’m fifth-generation. I grew up in a little town called Yukon [Okla.].

What did you study in college?

I started out pre-med. … I decided that political science and history and law school was probably a better fit. I was on an Air Force scholarship, and this was during the Vietnam era. I wanted to be a pilot more than anything. I was in the Reserves, and then in 1972, when I was graduating, President Nixon declared the war basically over. … They came to us and said, "Look, we don’t need pilots." … So I said, well, I’ll go to law school. … It broke my heart, it was what I wanted to do more than anything, I wanted to fly.

They wouldn’t let me go to pilot training. … [I was a] JAG officer in Desert Shield. I was still in the Reserves when I was in the House. … I’d do active duty tours during the breaks, secretly. … It was interesting, and it influenced some of my decisions. … The last day I was there, or the last week, Buster Glosson, who was the lieutenant general who developed the aviation war plan for the Gulf War, came to me and said, "OK, captain, congressman, enough of the JAG stuff, come with me." … We were at the secret base on the Yemen border. … They took me into a vault, and they showed on the table the paper where we were going to strike Baghdad … and asked what I thought. … I said, "Heck, yes. Count me in." They were so pleased that they took me out and I signed … the first bomb dropped in Baghdad, … that destroyed the Baghdad military intelligence headquarters.

What did your note say?

This one was for [Saddam Hussein]. I only wish he had been in that headquarters that night, but he wasn’t.

You were just 30 when you were first elected to Congress? Why did you decide to run?

The first speech I ever gave, I was 10, and the principal came to me and said, "David, you wrote a report on ecology, the garden club wants you to come give a speech." … And they all applauded and said how wonderful that was, so I was probably a little hooked. My teachers always would tell me — this is the beauty of America at that time they would say, "You know, David, you could be president." And I didn’t know any better. So John Kennedy got elected when I was 10 years old, and I was fixated. … To me, it was all about civil rights and opportunities, and that’s why I became a Democrat.

I got fired from my first job. … One of my good friends was working at a grocery store, and he came to me one day and said, "I know you need work, can you fill in for me?" … So I went and sacked groceries. And I was so good that eventually they said, "Why don’t you come in after Sunday school on Sunday, open the store and run the store through the day and close it?" … The manager came to me at the end of the year and said, "Oh, David, we don’t have your application on file because you came in as a fill-in. Fill out the application." So I sat down and I filled it out. He came back just blanched and said, "Oh, my God, I’m going to have to fire you." I said, "Why? Don’t you like what I do?" He said, "You’re wonderful, but you’re only 14 years old."

What’s the most fun part about being a member of Congress?

I actually loved committees, because to me it was like a kid in a candy store. You could investigate, learn about so many things. And I traveled a lot around the country and around the world, learning. … The other thing that was fun … because I was so young … I just wanted to get everything, all the information. I would go sit down with Claude Pepper, a senator from Florida, who had been a member of the Senate during the Roosevelt administration. I would sit down during breaks in our Armed Services conferences with the Senate and talk to Barry Goldwater.

You considered running for president in 1992.

I did for about eight weeks. … I brought people in, and we finally decided not to run, and then I endorsed [Bill] Clinton. I was the first non-Arkansas member to endorse Clinton.

I’m a golfer. … I didn’t play golf when I was in Congress, didn’t have time. But I have made up for it, so I am an avid golfer. I’ve gotten to play — since leaving Congress — a lot of nice places.

What surprises people the most about you?

I love babies. … I give a lot of advice about raising babies. My wife is a child psychiatrist, so you pick a lot of this up vicariously.

You’re not a fan of the term "fracking"?

When I came here, I was rather stunned, because I thought the industry was not responding probably as effectively as it should be on that particular issue. I said, if you give me a couple of million dollars and sent me to Madison Avenue and said, hire a firm to promote the absolute worst term in the world to describe an industry process, which has been going on for decades, you couldn’t have come up with a worse name.