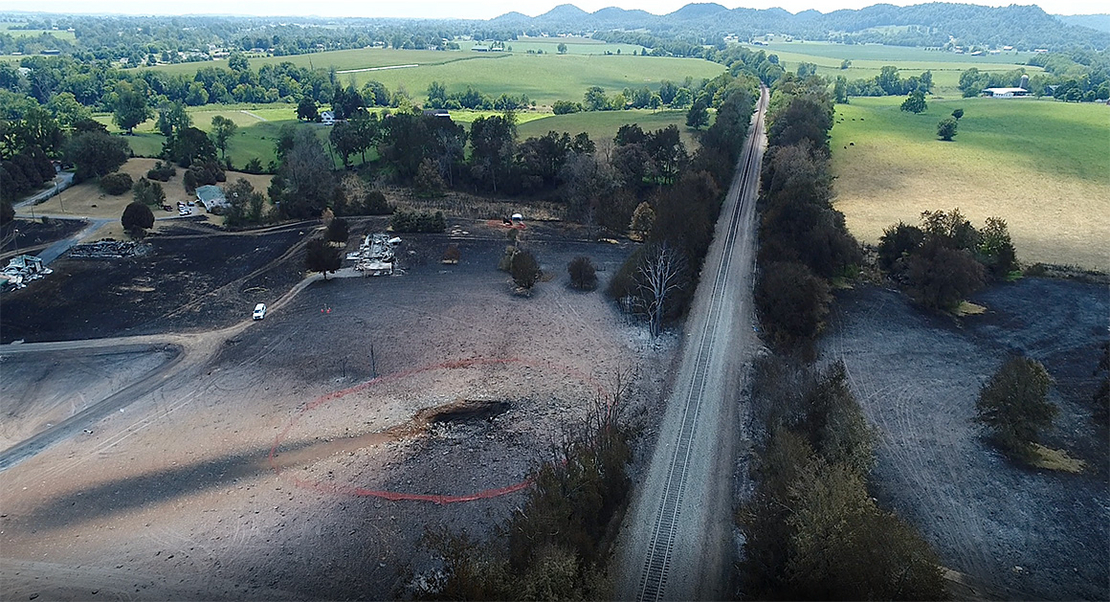 The site of a 2019 gas pipeline explosion near Danville, Ky., that killed a woman in a mobile home nearby is shown. Investigators said the rupture was caused by defective pipe compounded by ineffective maintenance. Regulators found damage exceeded the "potential impact radius" predicted using an industry-crafted federal formula. NTSB

An extended family of 12 was sleeping on the banks of New Mexico’s Pecos River on an August morning two decades ago when a nearby gas pipeline ruptured.

The explosion spit out three sections of severed steel pipe and opened a blowtorch 2 ½ feet wide. Flames reached across the desert terrain to the family’s campsite, scorching their pickup trucks and melting sleeping bags.

No one survived. All 12 family members — linked by marriage and shared grandchildren — died at the campsite, or later at the hospital. That included 6-month-old twins Timber and Tamber Heady.

The blast was 675 feet from the campsite, not far enough to spare them. But federal regulators later adopted a formula, still in use today, that would have deemed the family safe at 600 feet away.

Now a federal safety watchdog is urging regulators to change the calculation, which sets what’s called a “potential impact radius,” or PIR. It has many other names: “blast zone,” “incineration zone,” “hazard area.”

Whatever one calls it, the National Transportation Safety Board (NTSB) says the formula significantly underestimates the danger of gas pipeline explosions and called it “inconsistent” with evidence in arecent report (Energywire, Sept. 15, 2022).

“The whole thing was a fantasy story, like a fairy tale,” said Royce Deaver, a pipeline consultant who worked for Exxon Mobil Corp. for more than 33 years. He has criticized the impact formula for years, and his research was cited in the NTSB report.

Critics say the industry-crafted formula shows how federal pipeline oversight is tilted away from safety in favor of pipeline operators. The Pipeline and Hazardous Materials Safety Administration (PHMSA) has indicated it is willing to change the formula, telling the NTSB it would “strongly consider” modifications to ensure bigger safety margins.

Any increase in the radius of the blast zone could mean costly pipe upgrades for oil and gas companies. But even the engineer who devisedthe formula has acknowledged it has gaps.

“Don’t assume that you can stand and watch this fire at the edge of the PIR,” Mark Stephens told a Transportation Research Board (TRB) panel in October. “You can’t. You’re gonna run. You’re just likely to survive.”

Stephens alsodefended the formula, telling the panel it has held up pretty well since he put together the calculations in 2000 for a Canadian company called C-FER Technologies. The Department of Transportation, which houses PHMSA, later adopted the formula as its own.

Attempts to reach Stephens, recently retired from C-FER, were unsuccessful. C-FER also did not respond to calls and emails seeking comment on the formula.

NTSB pipeline accident investigator Sara Lyons told the TRB panel that regulators should add an extra “safety margin” to account for the many variables that come with a massive explosion.

Some safety advocates would like to see regulators go even further.

Bill Caram, executive director of the advocacy group Pipeline Safety Trust, said the NTSB’s recommendation is a chance to do more than tinker with the formula. Regulators should look at the land planning around the impact zone, he said, including whether to prohibit pipelines near buildings and even ban building near existing pipelines. That, he acknowledged, might be beyond PHMSA’s jurisdiction.

In late November, PHMSA Deputy Administrator Tristan Brown sent a letter to NTSB that said the agency has set up a team to consider changes to the formula. At a public meeting in Houston last month, Allen Mayberry, the top career pipeline-safety official at PHMSA, said there isn’t an official rulemaking process underway, but added that “It’s up for consideration. We’re exploring options right now.”

Creating or amending PHMSA rules, though, often takes many years.

The importance of five seconds

The use of the blast radius by regulators is oblique and not easily understood. It does not create a buffer or “no man’s land” along the pipeline route. There are no rules restricting building homes or even campsites within the radius, or “blast zone.” And companies can install their pipelines within the blast radius of a house or school.

Instead, the impact radius serves as a planning tool. PHMSA rules require companies to use it to determine if the area around their pipelines is densely populated enough to require extra safety measures, such as using thicker-walled pipe, testing the pipeline at higher pressures or operating the pipeline at lower pressures. The impact radius is also used in drafting emergency response plans to suggest places to start looking for damage and victims.

If the estimate of the impact radius is underestimated, Caram said, then many miles of existing pipelines were built and tested to insufficient standards.

The radius is supposed to predict the area that would be “severely impacted” if a gas pipeline explodes. Put a little differently, a person just outside that circle at the time of the blast should have a 99 percent chance of surviving an explosion.

But that survival rate rests on a set of assumptions that some safety advocates find unreasonable. It assumes that the person can decide within five seconds to flee, then run at about 5 mph for 25 seconds and find shelter within 200 feet. Stephens has said that he based that on previous research.

Safety advocates argue that elderly people or young children can’t run that fast. And they note there are many reasons a person wouldn’t be able to decide what to do in five seconds, starting with sleeping.

“They’ve got this little illusion of a story that people can do that in five seconds,” Deaver said.

The NTSB also said the formula falls short by assuming that the flames and heat from a ruptured pipeline radiate upward. The agency said in its report that flames from high-pressure pipelines mostly shoot horizontally, toward buildings and people nearby.

The predicted zone also doesn’t cover the complete extent of the explosion. Stephens told the TRB panel that the formula wasn’t designed to predict the “peak initial” blast.

Instead, he said, it reflects the average reach of the fire for the first minute of the explosion, when people nearby are scrambling for safety.

At least twice since 2017, explosions have blown lengths of steel pipe beyond the impact radius, according to a PHMSA analysis.

That analysis looked at 17 pipeline explosions between 2017 and 2022. In three of them, the agency found that the “impact area” exceeded the potential impact radius.

One of them was a fatal explosion in Kentucky in 2019, which prompted the recent NTSB report that questioned the PIR formula. In that explosion, the formula predicted an impact area of 630 feet. But PHMSA said the damage extended past 700 feet.

The pipe section ejected by the blast landed 600 feet away from the rupture. The NTSB reported that an off-duty sheriff’s deputy found an elderly injured couple 480 feet from the blast crater, and the intensity of the heat was more than he could handle. He could not reach the body of the woman killed in the blast, which was 640 feet from the crater.

The NTSB report on the Kentucky explosion cited three earlier instances with damage outside the blast circle: the New Mexico explosion; a 2018 blast in West Virginia; and a 2010 explosion in San Bruno, Calif., that killed eight (Energywire, Nov. 18, 2018; Energywire, June 17, 2016).

The formula dates back more than two decades, when Stephens and C-FER were hired to create it by an industry group called the Gas Research Institute, which is now part of GTI Energy. GTI, which is based near Chicago, did not respond to requests for comment about the formula.

Stephens has said that he aimed to simplify what could be a very complex calculation. The result is fairly straightforward. Regulators take the diameter of the pipeline and the pressure used to move the gas and run it through the formula. The resulting number is the size, in feet, of the potential impact radius.

“The approach I took was to make it as simple as possible to understand,” he said.

In his report for C-FER, Stephens wrote that his model is “preferred” because it comes up with a smaller radius than more generic models. It does this, the report said, by factoring in incomplete combustion of the gas and accounting for the heat absorbed by the atmosphere before it can reach buildings and people.

The most recent accident it looked at was in 1994, and the highest pressure on the list of “relevant” ruptures was 1,016 pounds per square inch (psi). Many new pipelines operate at higher pressures, such as Energy Transfer’s Rover pipeline, which operates at up to 1,440 psi.

Stephens’ formula was implemented in 2004 as part of a set of operating regulations for gas transmission lines known as “integrity management,” or IM.

Deaver, the pipeline consultant, believes PHMSA chose to use an industry-commissioned formula in order to avoid opposition from pipeline companies. Pipeline regulators, he said, have long relied on industry resources because of underfunding.

To him, it’s an example of the many complex ways that the oil and gas industry limits regulations. PHMSA officials say they stick with science and engineering principles with safety as the top priority. But safety advocates say the agency has less room to maneuver than other agencies because Congress imposed tighter limits, such as stricter cost-benefit analyses to ensure a regulation’s cost to industry doesn’t exceed its benefits.

“The pipelines,” Deaver said, “control the cost and the benefit of it.”