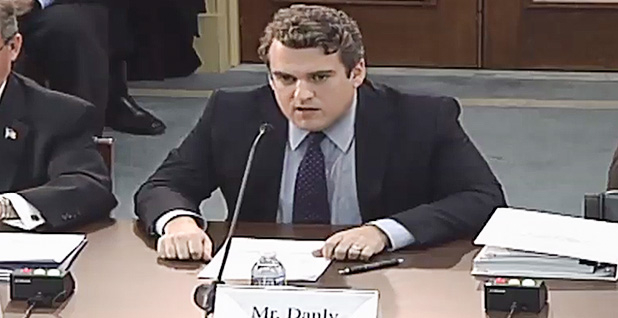 James Danly, general counsel at the Federal Energy Regulatory Commission, testified before a House subcommittee in January 2018. Danly has emerged as a front-runner for a vacant Republican seat on the regulatory panel and is pushing the theory of the "humble regulator." Energy and Commerce Committee

When James Danly, the general counsel of the Federal Energy Regulatory Commission, confronts an issue, he looks at it through the lens of a legal theory all his own.

He calls it the "humble regulator."

In essence, it means a regulator shouldn’t exercise the full extent of an agency’s jurisdiction, according to several people who have heard Danly talk about it on more than one occasion.

At FERC, that means a very narrow reading of the Federal Power Act and Natural Gas Act with a hesitancy to use the agency’s discretion to interpret those and the other statutes under which it operates, they said.

It is a departure from legal thinking that has long governed FERC under chairs of both political parties.

Danly’s credo draws on core tenets of the Federalist Society, an influential group of conservatives and libertarians who believe a regulator’s job is to stick to the text of a law and not what it should be, said several attorneys who practice before FERC.

His views "take on added significance and relevance," as he is a leading candidate to fill the vacancy at FERC created by the death of Commissioner Kevin McIntyre in January, said a Washington industry power-sector source who asked to remain anonymous.

FERC declined multiple requests for interviews, as did Danly, including questions about how his legal philosophy plays into how he does his job at the commission.

He is only the second FERC general counsel to be a political appointee and the first not to have been chosen by the chairman.

Danly, 43, was placed at FERC in September 2017 by the White House just a month after Neil Chatterjee, a Republican, was named chairman.

Danly is a relative newcomer to the law, having graduated from Vanderbilt Law School in 2013 after serving in the Army.

Before being named general counsel, Danly worked as an associate in Skadden’s Energy Regulation and Litigation Group. Prior to that, he was a clerk to Judge Danny Boggs at the 6th U.S. Circuit Court of Appeals and served as a managing director of the Institute for the Study of War, a military think tank in Washington, D.C.

By contrast, previous FERC general counsels have had long careers either with the commission or in the energy industry before becoming the top lawyer in an agency that employs hundreds of lawyers.

Danly is getting close support in the general counsel’s office from two lawyers formerly with Skadden’s Washington office.

Partner Matthew Estes left Skadden after more than 30 years and became a legal adviser to Danly in February 2018.

He was followed by Skadden’s counsel John Shepherd, who had nearly 18 years at the firm when he jumped to FERC in April 2018 to become Danly’s director of legal policy.

FERC did not immediately respond to a request for comment about the two lawyers and would not say whether they are political appointees or career civil servants.

Estes and Shepherd often accompany Danly to important meetings and are equal participants, according to three sources in the Washington legal world who have seen the men in meetings together. Those sources asked to remain anonymous to speak freely.

But Danly is said by one FERC source to be "fully engaged at policy meetings," where he’ll ask "incisive" questions.

Danly spoke about his belief in the "humble regulator" on April 30 during a keynote speech to Skadden’s Energy Regulation and Litigation Group’s 14th Annual Energy Conference in Washington.

Reflecting on his study of classics while an undergraduate at Yale University, Danly "gave an interesting talk in which he spun a cautionary tale on the proper role for a regulator by drawing parallels to the end of the Roman Republic," one attendee said.

Danly "asserted that Rome ceased to be a Republic as it gradually ignored its unwritten Constitution." He also acknowledged the possibility of FERC engaging in generic rulemakings, the source said, but said it should be very rare and aimed at curing obvious problems.

And Danly expressed a strict reading of federalism in which the states are recognized as supreme sovereign entities.

"In this context it’s impossible to imagine [FERC] doing" Order 888 in 1996 for open transmission access or an Order 636 that in 1992 made the unbundling of natural gas pipeline services possible, said a former senior FERC official.

"The idea [of the humble regulator] is to do in an order what is needed and avoid being prescriptive in ways that may intrude on the management discretion and creativity of regulated companies," said Richard Sedano, president and CEO of the Regulatory Assistance Project.

For example, in deciding a "key policy direction consistent with underlying statutes" such as directing a utility to do more transparent distribution planning, "specific details to implement the direction are left to companies, and can be course corrected later," Sedano said.

Evidence of Danly’s belief in the "humble regulator" theory might be found in his leading the commission last year to abandon the approach it had employed toward evaluating the effects of downstream greenhouse gas emissions from natural gas projects, using authority found in the National Environmental Policy Act.

That hands-off approach to performing greenhouse gas analysis has been repeatedly criticized by Commissioners Cheryl LaFleur and Richard Glick, both Democrats.

And last week, the U.S. Court of Appeals for the District of Columbia Circuit chastised FERC for its "decidedly less-than-dogged efforts to obtain the information it says it would need to determine that downstream greenhouse-gas emissions qualify as a reasonably foreseeable indirect effect" of a project (Energywire, June 5).

Danly’s less-is-more approach appears to be in line with Chatterjee’s not advancing a host of issues on FERC’s docket, some of which have languished for more than a year.

Scott Segal, an energy lawyer at Bracewell LLP, said the term "humble regulator" seems to be synonymous with the term "modest government."

"As I understand it, it’s when you’re confronted with a statute that you’re seeking to implement, you stick as close as possible to the exact meaning of that statute and you don’t engage in the sort of speculative regulation that you might if you embraced the longtime precedent in administrative law under the Chevron case."

Chevron USA Inc. v. Natural Resources Defense Council is a 1984 landmark case in which the Supreme Court ruled that courts should defer to a government agency in the interpretation of a statute it administers.

"There is no small measure of controversy surrounding [Chevron]," Segal said, because it allows regulators "a roving mandate to do good" and to "fill in the gaps" of a statute.

"I think someone who espouses the notion of being a humble regulator would be loath to think that any regulatory agency has a roving mandate," Segal said.

But Scott Hempling, a law professor at Georgetown University and longtime adviser to regulators, says Danly’s view ignores the intent of Congress when it wrote the laws governing FERC.

"Like most economic regulatory statutes, the Federal Power Act uses language both simple and broad. Rates, terms and conditions must be just and reasonable, and not unduly preferential. Those words compel FERC to induce utilities to perform cost-effectively. Congress has delegated to FERC the job of producing that performance," Hempling said in an email.

"To suggest that FERC may do nothing not explicitly stated is to misunderstand Congress’ intent. Congress chose not to describe every specific tool the Commission may use, because no Congress would have the expertise or foresight to know what those tools are," Hempling said. "To think otherwise is to misunderstand the very purpose of a regulatory statute. Regulatory statutes delegate the choice of policy tools to an expert agency."

Some call the FERC general counsel the "sixth commissioner."

Danly has made no secret of his desire to be one of the official five by filling the empty seat at FERC, according to several sources in and outside of FERC. And he has the support of Chatterjee as well as a number of Washington attorneys close to the Trump White House, sources said.

His nomination and confirmation would give Chatterjee what he has been seeking — a reliable third Republican vote who could help push through natural gas pipeline projects that have been stalled because of a 2-2 partisan split on the commission.

It would also solidify Chatterjee’s role as chairman, a role that was threatened by the thwarted nomination several months ago of former NRG Energy Inc. executive David Hill to replace Chatterjee as chairman.

Chatterjee led an effort to have the White house pull back on its intended nomination of Hill, according to multiple sources. Chatterjee has denied those accusations (Greenwire, April 12).

Danly would be only the second FERC staffer to serve on the commission.

In comparison, Norman Bay, the former head of FERC’s enforcement office, was selected by President Obama to be chairman in 2014.

Before joining FERC’s enforcement office, Bay had spent more than a decade as a federal prosecutor in Washington, D.C., and New Mexico.

But sources stressed that a nomination is months away.

"If you think there’s a chance of Danly getting on the commission by early this fall, I would easily take whatever odds you want to give me with a Nov. 1 over/under date," said one veteran regulatory affairs official with a major utility.