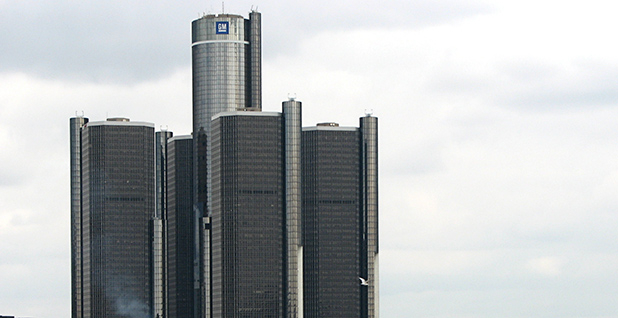 Twenty-two large investors in General Motors Co. are urging the company to join an agreement with California to improve fuel efficiency.

In a letter to GM CEO Mary Barra, the investors demanded that the company take seriously its commitment to fighting climate change by joining the voluntary deal.

"As long-term investors with $1.1 trillion in assets under management (AUM), we believe that the mitigation of climate change is essential to safeguarding our investments," they wrote.

"We urge you to join this compromise agreement, which is consistent with General Motors Company’s (GM’s) call for … continuously improving fuel economy and its stated goal of moving toward zero emissions," they added.

At issue is a July agreement between the California Air Resources Board and Ford Motor Co., Honda Motor Co. Ltd., Volkswagen AG and BMW of North America to improve fuel economy in the coming years (Greenwire, July 25).

It could also help the participating automakers stave off years of regulatory uncertainty as the rollback gets challenged in the courts.

"Joining the agreement with California would provide significant benefits for GM by allowing it to avoid regulatory uncertainty and litigation delay," the investors wrote.

Still, the Justice Department has launched an antitrust investigation into the four automakers that have already joined the deal — a fact the investors neglected to mention (Greenwire, Sept. 6).

NEI Investments, a Canadian company that holds more than 178,000 shares in GM worth $8.9 million, signed the letter.

Jamie Bonham, manager of corporate engagement at NEI Investments, told E&E News that GM was an "obvious outlier" from the deal.

"We were pleased to see Ford, Honda, BMW and Volkswagen sit down with California and work out a commonsense approach to this," Bonham said in a phone interview this morning from Vancouver, British Columbia.

"The other companies were able to do it," he said. "Why wasn’t GM part of that?"

Bonham said he wasn’t aware of the Justice Department probe until being informed by E&E News.

"I don’t know anything about that. News to me," he said.

This isn’t the first time that GM’s investors have pressured the company over climate change risk and disclosure.

In May, 18 large investors urged the company to publicly support strong fuel economy standards and better disclose its lobbying practices ahead of an annual shareholders’ meeting (Greenwire, May 17).