Georgia Power defends ‘every dollar and every day’ spent on reactors 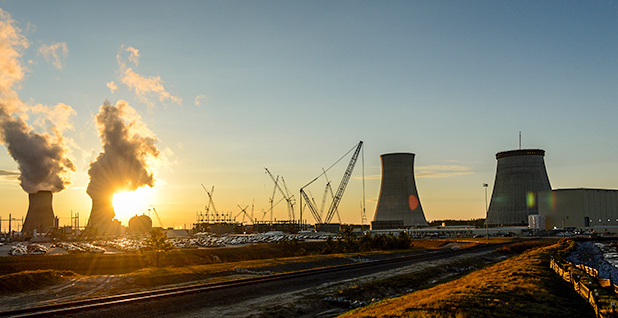 The sun sets behind the Vogtle 1 and 2 cooling towers near the units 3 and 4 construction site. Photo courtesy of Georgia Power Co.

ATLANTA — Everything that Georgia Power wants anyone to know about its Plant Vogtle nuclear expansion project can be summed up in this comment from its chief executive officer.

"Every dollar and every day that has been invested has been necessary to complete these new units safely and correctly. Our reports will establish that the new units could not have been built for less money or in less time than it has taken," Paul Bowers wrote in a letter to the Georgia Public Service Commission.

Regulators received the letter as part of a package of documents filed earlier this week.

The papers explain why Georgia Power should recoup billions in capital costs from its customers for building the twin reactors in eastern Georgia. Commissioners will weigh that along with testimony from its staff, consumer advocates and others, and rule later this year.

The roughly 1,000 pages include a storied history of Vogtle units 3 and 4, the first reactors in the nation to be built from scratch in three decades. They also are a stark reminder of how massive and complicated such projects are, and even how the idea of building nuclear plants is so polarizing.

A chief reason why includes a key date that just passed. Unit 3 originally was scheduled to start producing electricity on April 1. It now is scheduled for June 2019, but an expert Georgia Power hired to supply testimony this week said there are risks involved with meeting that deadline.

The challenges at Vogtle are not new. Georgia Power is required to give the PSC a cost-and-schedule update every six months, and an independent monitor separately weighs in with his update.

This week’s filings are the first time that every obstacle — from regulatory red tape to studs being welded too close together — is spelled out in one place. Through the documents, Georgia Power wants to make two things clear: None of the problems at Vogtle is the utility’s fault, and its arguments to support that are air tight.

The package is rounded out with a letter from Georgia Gov. Nathan Deal (R) and a report from a former state Supreme Court justice, explaining the legal standard that the PSC should use when determining whether Georgia Power spent dollars prudently. In other words, the utility wants to make sure that hindsight doesn’t come into play here.

Georgia Power spokesman Jacob Hawkins said the PSC asked that the company give legal basis for a prudence standard.

"The Honorable Justice Norman Fletcher provides unmatched legal basis on this issue for PSC consideration, as the other sources do in their areas of expertise," he said in a statement emailed to EnergyWire.

It’s likely that legal standard will be debated at some point, however. The PSC has its own lawyers, and the chairman also has a law degree, for that matter.

"They are welcome to give their opinion on what that standard is," PSC Chairman Chuck Eaton said. "It’s going to be interesting to see how this plays out."

How did we get here?

That Georgia Power, regulators and others are even here is controversial. The utility, PSC staff and consumer advocates struck an agreement years ago that there would be no prudency review until Unit 3 started producing electricity.

That agreement also hinged around the outcome of a lawsuit between Georgia Power and Vogtle’s contractors. The sides settled the issue late last year (EnergyWire, Oct. 28, 2015). It was that settlement, in which Georgia Power must pay $350 million, which triggered discussion of a full cost review.

Regulators asked the utility to hand over all of the documents related to Vogtle and its costs to date. Some hope Georgia Power and PSC staff can settle some issues, but the ones they can’t will be vetted in public hearings.

Consumer advocates and others have raised concerns over whether forcing the PSC staff to deal with such a high-profile, complicated issue now, without full hearings, would mean customers would lose out in the end.

Georgia Power is building Vogtle with a group of electric cooperatives and municipal utilities. The company’s share of Vogtle is 45.7 percent, which was certified at $6.1 billion.

That was when the reactors cost $14 billion, but a series of regulatory changes and vendor problems have driven up costs. This has made Georgia Power’s share now $1.7 billion higher, according to its latest cost-and-schedule report (EnergyWire, Feb. 29).

Roughly 4.5 percent of a projected 6 percent rate increase for customers is already a part of their monthly rates. This is because customers are paying the financial costs of the project now. Georgia Power says rates will drop once Unit 3 starts producing electricity.

Vogtle is Georgia’s largest economic development project, adding thousands of jobs to a rural part of the state. Georgia Power and state utility regulators once touted Vogtle as an investment in long-term energy diversity for the state, which once got the bulk of its electricity from coal.

Now the reactors are critical for other reasons. The 2,200 megawatts of emissions-free electricity has become essential for Georgia to meet its targets under U.S. EPA’s Clean Power Plan, which currently is tied up in courts.

Being first has its pitfalls

Vogtle’s challenges to date are almost as monumental as the project itself, as experts outlined in their testimony. Though the project received accolades for restarting the dormant nuclear industry, there were costs to doing so.

Georgia Power now had to rely on a global supply chain for a lot of the components, requiring a new oversight model from the Nuclear Regulatory Commission. In the United States, the main contractors lacked their own stringent quality control programs when it came to building components known as modules.

That’s without other missteps. Westinghouse miscalculated how long it would take to complete the design work; the number of trained and qualified workers and inspectors was smaller than expected; and components were consistently built incorrectly and to subpar standards.

The NRC also made Vogtle the "reference project" for future reactors. That raised the level of standards that were already stringent to begin with.

Everything — from concrete to piping to heating, ventilation and air-conditioning systems — had to adhere to the AP1000 design. The contractors could make changes, but that required additional months of review and inspection from the NRC.

At the center of managing this is Georgia Power and is sister company, Southern Nuclear. In his report to the commission, a veteran project manager said Georgia Power could not do any better in managing the project given the information and circumstances at the time. His comments also show the level of angst the utility had over making sure Vogtle was built to standard.

"[Georgia Power] followed the status of module fabrication so closely in early 2010 that the [main contractors] complained that GPC wanted to know too many details about sub module fabrication," wrote Charles Huston, a veteran project manager with Eagle Enterprises.

Huston said four main risks stand in the way of Vogtle being completed on time now, running contrary to the company’s message that the contractors have assured them they can meet the new schedule.

The risks include future engineering and design changes that aren’t yet known; the amount of quality control documentation needed before Vogtle officially can be moved to the "testing" phase; the time needed to complete other NRC inspections; and the fact that the AP1000 design has new safety systems that have never been tested.

Georgia Power is holding firm that the project can be completed according to the new schedule.

"The project is progressing well and in a great position moving forward. The contractor continues to implement mitigation strategies to avoid further delays and leverage lessons learned on the construction of Unit 3 or Unit 4," Hawkins said.