Georgia’s ‘wild woman’ wants to keep rockets off her island 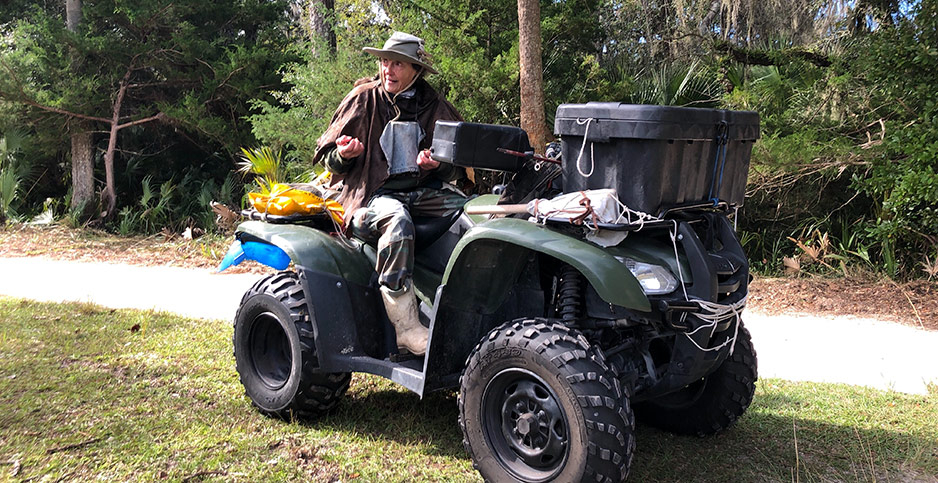 Carol Ruckdeschel, who has lived on Cumberland Island, Ga., for nearly 50 years, opposes a proposal to build a commercial spaceport nearby. Rob Hotakainen/E&E News

CUMBERLAND ISLAND NATIONAL SEASHORE, Ga. — At 78, Carol Ruckdeschel still eats roadkill and says it has never made her sick.

She’s tough, having lived without electricity on this remote barrier island for nearly 50 years. And she’s easily the island’s most famous resident, forever dubbed "the wild woman from Georgia" after Pulitzer Prize-winning writer John McPhee profiled her in The New Yorker in 1973.

A longtime environmental warrior, Ruckdeschel has a new fight on her hands: She wants to make sure no rockets start flying over Cumberland Island, one of the last long stretches of undeveloped land on the East Coast.

That’s exactly what would happen if Camden County commissioners get their way and build a commercial spaceport 4 miles from her home, a project that supporters say could bring hundreds of high-paying aerospace jobs to southeast Georgia.

"This is right in the main trajectory — I’m dead center," Ruckdeschel said in an interview last month, sitting at a picnic table in her backyard. "I’d have to leave, I think, if they did it. … Think about it: If they’re shooting one of those off once a month, which is what they’ve proposed, would you want to live here?"

Trained as a biologist and an expert in sea turtles, Ruckdeschel knows a thing or two about environmental fights. She has fought hard to resist development on the 18-mile long island, and when former President Carter was Georgia’s governor she convinced him to take a canoe trip with her so she could show him pollution in the Chattahoochee River.

For now at least, Ruckdeschel said she has no plans to leave the island, which is only accessible by boat or ferry from nearby St. Marys. She said she has already sold her house and land to the National Park Service for $45,000, but she wants to take advantage of a provision in the contract that allows her to stay on the property until she dies.

Ruckdeschel and many of her neighbors hope they can block the spaceport, overcoming strong backing from the local county board, the state’s Republican governor and the entire Georgia congressional delegation. Both sides are hoping for more ammunition on Dec. 16, when the Federal Aviation Administration is expected to issue its final environmental impact statement on the project.

The National Park Service took control of much of the island in 1972 after President Nixon signed legislation creating the national seashore, a collection of 36,000 acres of salt marsh, beaches and maritime forests. The island also contains roughly 9,000 acres of federally designated wilderness, the highest protection granted to public land.

Once an exclusive playground for the Carnegies and other wealthy families, the island has mansions and historic structures that were in various states of decay when the park service moved in.

Opponents fear that building a spaceport next to the park would change its character and endanger residents in the case of an accident.

"It’s a highly unusual situation in that there’s never been a national park that has been put in this position to be launched over," said Rebecca Lang, another local resident who’s against the project. "I know national parks are under attack all over the place, from all different things, but who would have ever thought rockets?"

The project — called Spaceport Camden — has been in the works for years and has won plenty of support from local residents who welcome more economic development.

Catherine Goeller, a teacher at St. Marys Middle School who rode the ferry to the island with her parents and three children last month, said the spaceport "would be a great thing," allowing her school to partner with new members of the community involved in science, technology, engineering and mathematics. And she’s not worried about safety issues.

"I would imagine that with anything like that there’s protections put in place," Goeller said. "And it is going to bring positive job opportunities to the area."

When former Gov. Nathan Deal signed a bill paving the way for the project in 2017, he said the spaceport would make Georgia "the best place in the nation to launch a rocket."

Backers of the project are eager to see the final EIS in the coming days, confident that it will bring good news.

"We’ve been waiting a long time for this announcement, and Camden County has been working very closely with the FAA to keep our launch application review on schedule," said Camden County Commission Chairman Jimmy Starline.

County officials say the project is consistent with the Trump administration’s focus on national space policy and efforts to streamline launch and reentry licensing. In a draft EIS released last year, FAA said areas that could be affected by a rocket would be closed before any launch and that the spaceport would be surrounded "by an appropriate buffer to ensure the safety of the project."

Both the park service and the Interior Department have written letters raising a series of questions about the project, including its effect on public safety.

In its formal response to the draft EIS, Interior said the document made "no mention of the potential for flaming debris to fall on land" and that more study was needed to determine the likelihood of a catastrophic event.

"Failures have occurred throughout the history of space and they are likely to occur again," Interior said in a letter to FAA.

Local residents say that federal and county officials need to provide more answers on the extent of damage that could come from falling rocket parts.

"Every piece is heavy enough to kill someone, and Camden County is suggesting that hundreds of people can be walking around in the open directly underneath," said Kevin McMillen, a Little Cumberland resident and president of the island’s homeowners association.

‘There’s meat all over the road’

After McPhee called Ruckdeschel Georgia’s "wild woman" in The New Yorker profile, author Will Harlan upped the ante with a book that called her "the wildest woman in America."

Asked if it’s really true that she eats roadkill, Ruckdeschel minces no words.

"Of course it’s true — why wouldn’t it be true?" she said. "There’s meat all over the road if you wanted to stop and pick it up.

"I don’t understand the way people think," Ruckdeschel added. "I mean, squirrel hunters will go out and they’ll shoot squirrels all day and put them on their back in their little pouch and walk around all day and everything’s fine and go home and clean them. Yet if on the way home they hit a squirrel they wouldn’t think of picking it off the road and eating it. Now that to me is a little incongruous. … We just have this weird thought that there’s something wrong if it’s hit by a car."

She uses a four-wheeler to get around, wearing a deer hide to stay warm. She wears her hair in pigtails and carries two clothespins on her hat, a gift from the park service: "One holds my pigtails back when I get in blood and guts, and the other side has a pencil in it — it works."

After growing up in Atlanta, Ruckdeschel studied zoology and ecology and then worked for the Georgia Natural Areas Council, roaming the state to identify natural areas that needed attention. She said she was eager to get out of the city and fell in love the first time she saw Cumberland Island.

"I love Georgia and I love the South, but life just didn’t seem real in the city," Ruckdeschel said. "It wasn’t for me. It was never dark in Atlanta, it wasn’t ever quiet and the air was bad. That’s why I came here."

The only regular traffic she sees are the tour buses that come by to see the tiny First African Baptist Church, located just a few feet from her house. She said the buses bring tourists "not because the church is anything spectacular, it’s because there’s nothing else to see."

The church, one of the park service’s restoration projects, made headlines in 1996, when John Kennedy Jr. married Carolyn Bessette there. When the ceremony started late, Ruckdeschel brought over her kerosene lamps since there was no electricity.

Mostly it’s quiet on the island, just the way Ruckdeschel likes it. Even if the spaceport is built and a rocket doesn’t fall from the sky, she said the noise and bright lights would still change things forever.

"Obviously they don’t care about anybody’s peace and enjoyment of their property or they wouldn’t want to be shooting rockets over their houses," Ruckdeschel said.