Germany’s largest hard coal mine: ‘This is our final mission’ 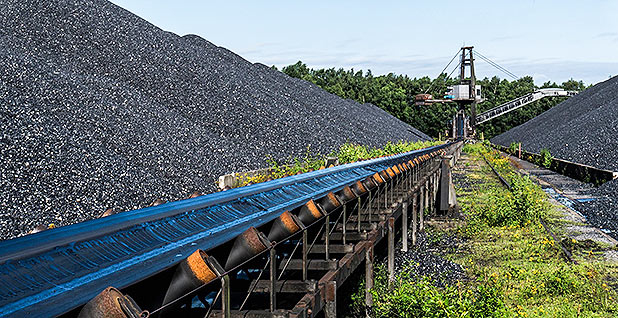 A conveyor belt between heaps of hard coal in Ibbenbüren, Germany. Photo by Umair Irfan.

Second in a series about Germany’s struggle with fossil fuels. Click here for part one.

IBBENBÜREN, Germany — The Germans have a word to describe the long goodbye.

Abschiedsstimmung — which translates roughly to "the lingering feeling of saying goodbye or farewell" — could describe the complicated feelings here as the 500-year-old mining industry that fueled this region prepares for its demise.

From as deep as 850 meters below the surface, workers have extracted millions of tons of shiny, hard, black coal and piled it in towering heaps aboveground. The coal produced electricity and heated homes throughout Germany for decades.

Some of the original equipment still in use today, like the drive motors for the mine shaft elevators, is more than 100 years old. But by 2018, it will all come to a halt.

"I say on behalf of my fellow miners that it’s difficult to shut down this mine. This is our final mission," said Hubert Hüls, manager of the aboveground operations division at RAG AG, the company that operates the mine and Germany’s largest mining corporation.

"Of course, there’s quite a bit of sadness," said Hüls. "It’s very hard to plan your own funeral."

More than 600,000 people worked in the German hard coal industry in the 1960s. It now provides close to 20 percent of the country’s electricity and fewer than 16,000 earn their pay in the mines.

Unlike lignite mining, much of hard coal extraction takes place out of sight, but it’s not out of mind for the workers who greet each other with a hearty "Glückauf," meaning good luck, as they head down into the mines, or the nearby residents whose jobs depend on its operations.

The German federal government has set a 2018 deadline for ending extraction of hard coal for reasons stemming from politics and economics, leaving many here to wonder whether there is a life after the death of an industry.

"We now have a political mission to shut down the mines in a socially acceptable way," said Hüls.

Thousands of jobs on the chopping block

Other sectors, and other countries, will have to develop their own words to describe their feelings as they reckon with the industries and jobs that may not survive in a carbon-constrained world.

Countries like India and China have a massive and growing appetite for energy, and coal quickly satiated their demand. However, choking smog over their largest cities has led to pushback, and these countries are now scrambling for alternative energy sources. Miners may soon be out of work as demand levels off.

Some leaders, like President-elect Donald Trump, have vowed to bring coal jobs back to ailing towns and restore the industry to its former glory (ClimateWire, July 22). But the German hard coal industry has to confront its own mortality without a champion in Berlin.

Hard coal, also known as anthracite, has some of the highest energy and fewest impurities of any coal variety. However, it’s expensive to mine anthracite in Germany, where it can cost three times as much as imported coal.

RAG attributes this to the high environmental and industrial standards in Germany, as well as the drilling depth required to extract hard coal.

Three-quarters of the mine’s coal goes to a nearby power plant owned by the utility RWE AG, and the rest of the coal is sold on the market as heating fuel.

At the moment, the company produces 6.2 million tons of coal per year, employing 9,200 workers and training 430 apprentices. Officials expect the loss of 2,000 jobs directly associated with the mine in 2018, as Germany ends mining of hard coal.

"That doesn’t mean hard coal use in Germany will end at that date," said Daniel Klingenfeld, head of the director’s staff at the Potsdam Institute for Climate Impact Research.

Already, more than 90 percent of Germany’s hard coal demand is fulfilled from abroad, mainly from Russia, the United States and Colombia. In two years, Germany’s entire anthracite demand will be met with imports.

The new coal plant was built on top of a natural gas power plant that was demolished in 2004, and the facility fulfills about 90 percent of Hamburg’s electricity demand.

Vattenfall boasted that the new plant is one of the most efficient coal-fired power plants in the world, with a net efficiency of 46.5 percent.

Opponents said the plant would release 8.5 million tons of carbon dioxide per year, along with thousands of tons of particulates and smog-producing compounds.

Anthracite miners did put up a fight for their industry. They argued that ending coal mining in Germany might simply open up space in the global carbon budget for other countries, many of whom don’t adhere to the same environmental standards or operate power plants that are as efficient.

During political debates on the future of coal, the industry noted that imported coal hides the environmental price of shipping and the higher carbon footprint of mining operations in anthracite exporters.

But the arguments didn’t sway legislators. "We wanted a future for coal mining operations," Hüls said. "We failed."

‘They’ve beat the living crap out of us’

The fight for anthracite mirrors the desperate push to save coal miners’ jobs in the United States, where competition from low-cost natural gas has undermined the coal industry in states like West Virginia. There, the unemployment rate has risen to 7 percent, above a national average of 4.9 percent, and West Virginians echo the feeling of abandonment that German miners have expressed after bringing prosperity to the country.

"We have done everything this country has asked of us. We’ve done the heavy lifting. We’ve mined the coal. We’ve made the coke. We’ve made the steel. We do it all," said Sen. Joe Manchin (D-W.Va.), speaking at a carbon capture and sequestration showcase on Capitol Hill in October.

"We’ve done everything they’ve asked, and they’ve beat the living crap out of us. … If we hadn’t done what we did, you wouldn’t be living in the freest country in the world, the superpower of the world," he said.

The senescent German hard coal industry is now trying to build an afterlife for its workers.

Mining unions lobbied hard for an exit package for workers, many of whom will likely not re-enter the workforce.

Underground workers will receive an early retirement package at the age of 50, and aboveground employees can avail their retirement at 57. Younger workers will be redirected into RAG’s sister companies, as well as options for retraining.

"There’s not a single miner that should find himself in a state of unemployment," said Friedhelm Hundertmark, the Ibbenbüren district manager for IG BCE, the German mining and chemical industry trade union. "We don’t want to leave them in the lurch."

One potential opportunity for miners is environmental remediation, working to restore the environment around the mines and preventing further damage to the land and water. "We don’t want to leave behind a scorched earth," Hüls said.

Local planners have drafted proposals for green spaces and renewable energy parks across the Ibbenbüren mine’s 9,700 hectares, an area slightly larger than Manhattan. RAG is also investing in wind, solar and geothermal energy projects in the region.

"We believe that this might be an opportunity to promote regional tourism," said Monika Umlauf, an urban planner and associate executive manager at Schnittstelle Kohlekonversion, a regional post-coal planning initiative.

U.S. lawmakers have called for similar efforts to rejuvenate coal communities with incentives for renewables. "Don’t you think the extenders should be given in the areas that lost the jobs?" Manchin said. "It makes all the sense in world. You’re still getting your policy changed going to a different type of energy source, but you’re taking care of the people that are going to be left behind."

But even if mining jobs are replaced with jobs in renewables, jobs on the fossil fuel power generation side are still at risk, since every climate change mitigation pathway calls for a massive drop in coal combustion.

"I personally would not say the future of coal is that rosy, especially in Germany," said Stefan Bößner, a research fellow at the Stockholm Environment Institute. "Taking the global perspective into consideration, I think the days of coal are numbered."

Correction: An earlier version of this story misidentified the region where the mine is located and misstated the rationale for withdrawing from hard coal mining.