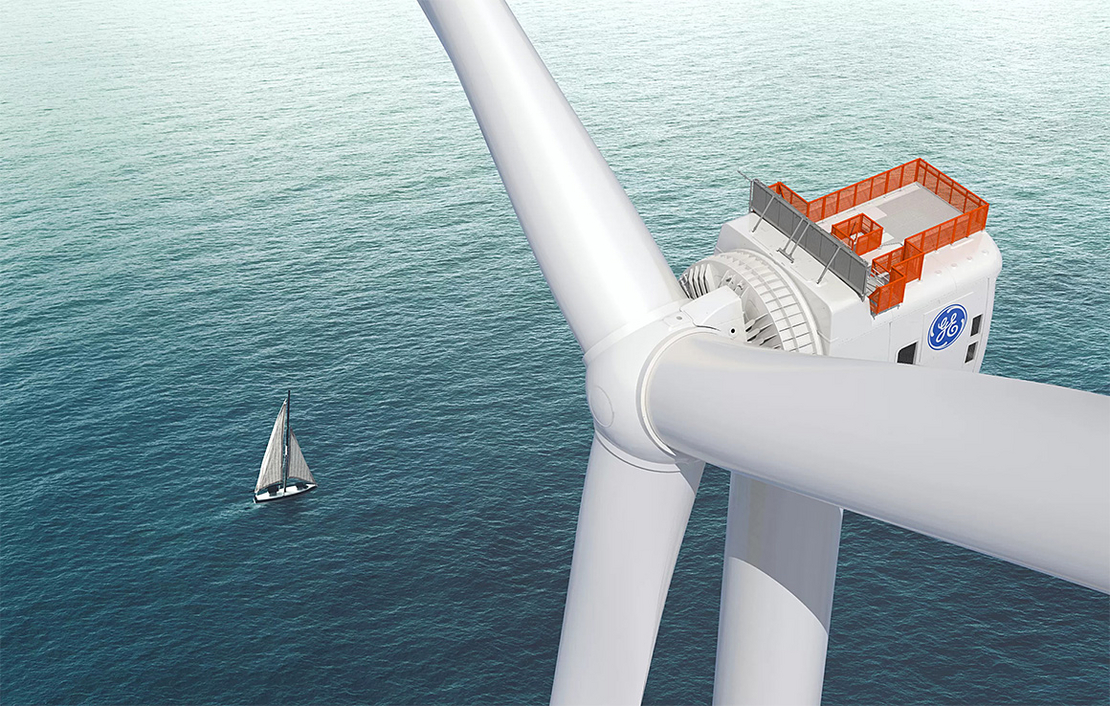 Under a plan rolled out yesterday as U.S. stock exchanges opened for trading, executives said GE would split into three companies built around its major business units: energy, health care and aviation. GE’s sales of energy technology will split from the Boston-based parent company in 2024, after GE first spins off its health care unit.

The United States is the major battleground, with a string of projects along the Atlantic Coast and significant GE contracts to supply turbines for projects in New Jersey and Maryland.

“There will be winners and losers. The mainframe computers in the 1970s were out of business in the 1980s,” said Andrew Dillon, a strategist for the energy consulting firm West Monroe Partners. “That’s possible in energy. It’s up to the big companies to really focus on needs of the future and not look backward.”

GE Chair and CEO Larry Culp, who was brought in three years ago to redesign the slumping company, said the size of the opportunities and the intensity of competition in all three sectors — energy, aviation, and health care technology — require separation of the businesses under totally focused managements. With revenues of an estimated $33 billion, the energy division contributes between 15 to 20 percent of GE’s value, according to RBC Capital Markets.

“Operating each of these businesses as independent companies will enable them to realize their full potential,” Culp said during a conference call with investment analysts.

GE’s spun-off energy business will still have a vital stake in fossil fuels with the revenue and earnings it gets from selling natural gas-fired power turbines and servicing its large fleet of operating turbines around the world.

The gas turbines became an albatross for GE in 2017 as global sales fell sharply under pressure from wind and other energy technology. Sharp financial reverses followed, prompting the resignation of GE Chair and CEO Jeffrey Immelt, after 16 years in the position. GE’s stock plunged 50 percent, wiping out $139 billion in shareholder value over a year.

‘A shift from fossil fuels’

Nicholas Heymann, a financial analyst with William Blair & Co., noted that GE is already pushing ahead on technology that would permit its gas-fired turbines to run partially and eventually completely on zero-carbon hydrogen.

“GE is in the midst of a shift from fossil fuels to green hydrogen and renewables,” Heymann said. “It’s a pretty envious position.”

EnergyAustralia and GE are collaborating in configuring a GE F-class gas turbine to run on a blend of natural gas and hydrogen. The cost of hydrogen production and infrastructure remains a severely limiting issue for purely hydrogen-fueled electricity, except as “peaking” plants to meet high-level power demands, analysts say.

There are also opportunities in the development of digitized controls for a power grid that will be increasingly complex. Analysts expect big leaps in production of wind and solar power in the 2030s, two-way power flows between distribution utilities, rooftop solar panels and electric vehicle chargers.

“There is a lot of competition, but GE is in the front row,” he said. “There’s a lot of good here.”

The fate of proposed tax incentives for clean energy investment is a short-term issue for GE. The outcome of congressional negotiations around a Democratic spending plan will influence how fast and steadily the market opportunities grow for the new GE energy spinoff.

That development, in turn, will affect decisions on expanding wind turbine production in the U.S., a top priority of the Biden administration.

The U.S. offshore wind market could grow to 19,000 megawatts of capacity by 2028, according to a Wood Mackenzie analysis, reported by that company’s Greentech Media.

GE has two offshore turbine factories in France and is building one in China, and says it is “inevitable” that big wind unit factories will be built to serve the offshore market, GTM reported.

A separated energy unit will not have access to GE’s balance sheet to fund expansion in the face of powerful global rivals. “But there may be a silver lining,” Dillon said.

As a stand-alone company with a future focused on clean energy, the GE energy offshoot is likely to be a favored recipient of development capital by investment firms pledged to support environmental, social and corporate governance (ESG) goals.

“This may bolster their ability to get preferential financing,” he said.