‘Get back to school’ — GOP climate divisions on display 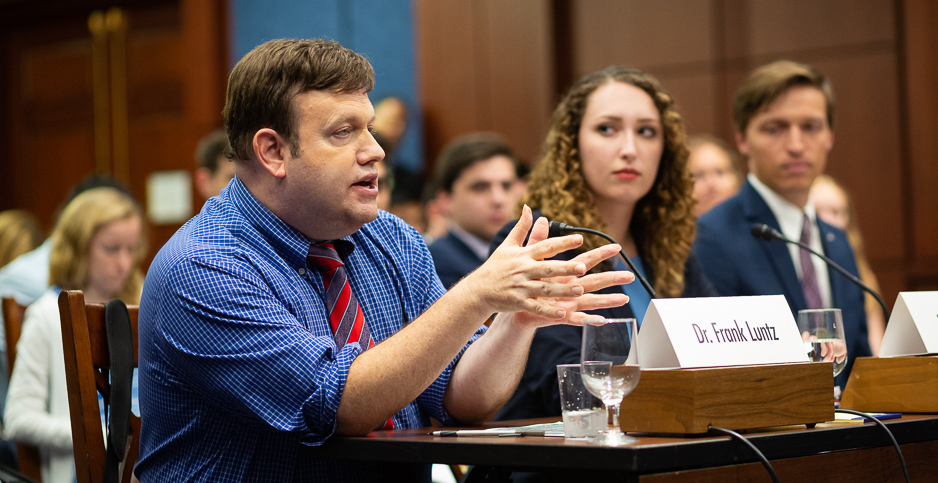 The full spectrum of Republican climate politics was on display yesterday. So was the generational divide driving it.

On the Hill, young Republicans warned that their party risks electoral defeat and environmental breakdown if something doesn’t change. One broke into tears while urging bipartisanship. Carbon taxes played a starring role.

Down Pennsylvania Avenue, a group that rejects climate science met in the Trump International Hotel to rally around a more combative message: Tear down EPA, yank the purse strings of academics and don’t cede an inch to the newly emboldened green movement. "Climategate" was a favorite reference.

The mostly older, mostly white, mostly male gathering at the Heartland Institute’s climate conference made for a clear contrast to the Senate Democrats’ Special Committee on the Climate Crisis, which hosted two young Republican leaders and Frank Luntz, a GOP pollster who’s urging the party to become more mainstream on climate change.

The split screen came at a climatic moment. Paris yesterday baked in its hottest-ever heat. Last week, Washington endured a heat wave that broke the Potomac River’s record temperature. July is set to become the warmest month in history, and 2019 is on track to join 2018, 2017, 2016 and 2015 as the five hottest years on record.

Heartland’s conference speakers waved that away.

"To climatologists, I say this: Sorry, guys, you were wrong," said Christopher Monckton, a Heartland Institute adviser who used to work for Margaret Thatcher.

He continued: "To the zombie schoolchildren who have deserted their classrooms to regurgitate half-understood pseudoscientific pap about ‘saving the planet,’ I say this: Get back to school."

Jay Lehr, who was Heartland’s science director for 26 years, received the institute’s Dauntless Purveyor of Climate Truth Award. In his acceptance speech, Lehr seemed to acknowledge his movement is failing to persuade young people that carbon dioxide emissions are good.

"Everybody in this room is not risking their lives, but we are all risking our way of life. Because that’s what this is all about. … And we have failed to properly educate politicians, students and the public," he said.

As evidence, Lehr pointed to Harvard University students voting to divest the university’s endowment from fossil fuels, followed by "the female president of Harvard" pledging to use the endowment to fight climate change.

The remedy, he said, is relentless repetition of their message.

"There is nobody who rides an elevator with me or sits next to me on an airplane [who escapes]. … My favorite one is shopping for dog food in the supermarket. If someone is taking a little while picking out their dog food, they’re going to get a tutorial on climate change," Lehr said.

Messaging played a big part of the climate hearing on Capitol Hill, too.

Luntz said Republicans need to hear how global warming — and its solutions — will affect them personally. He offered a formulation that he says will persuade skeptical voters.

"If we do this right, we get cleaner air, we get less dependence on foreign fuels, and enhanced national security, we get more innovation in our economy, and more jobs and great new careers. And that’s if the scientists are wrong," he said.

"If the scientists are right, we get all of those things and begin to solve what could be the most catastrophic environmental problem that any of us have ever faced," Luntz added.

That no-regrets messaging appeals to all age groups, he said.

The Republicans urged Democrats to make climate policy bipartisan, or else conservatives will undo it the next time they take power. That means not using climate as a political weapon or as a vehicle for passing unrelated liberal measures, they said.

Fighting back tears, Huey said climate change is a symptom of partisanship, and voters are hungry for politicians to work together. Achieving that will require lawmakers to make it safe to compromise and concede, he said.

"Could you imagine the headlines today if instead of passing a resolution to condemn someone’s rhetoric, you introduced a resolution to apologize for your own, as a gesture of goodwill?" he asked.

No Republican senators stopped by the climate hearing, but conservative lawmakers did make time for the Heartland Institute.

One of the keynote speakers was California Rep. Tom McClintock, a high-ranking Republican on the Natural Resources Committee who said Heartland was "the very first place we turn to in order to get credible, science-based testimony on Capitol Hill."

Rep. Jeff Duncan (R-S.C.), an Energy and Commerce Committee member, addressed conference-goers during dinner Wednesday, according to James Taylor, a senior fellow at the institute.

Despite the glitzy venue, speakers said they were crusading for the powerless.

Standing beneath six crystal chandeliers, Monckton, a British lord, invited President Trump to rebuke the Intergovernmental Panel on Climate Change "on behalf of the working people of the whole world."

The generational divide was apparent to some conference attendees.

"Look at the demographics. This is almost like an Episcopal church where everyone’s over 60," said Robert Kappelmann, an independent environmental consultant. That’s not necessarily a bad thing, he added, because many attendees have used those years to accumulate formidable scientific backgrounds.

An audience member held up her iPad to photograph the presentations. When the panel ended, attendees shuffled out as the loudspeakers played "(Don’t Fear) the Reaper."