Get your bonus? Nah, I missed my climate target 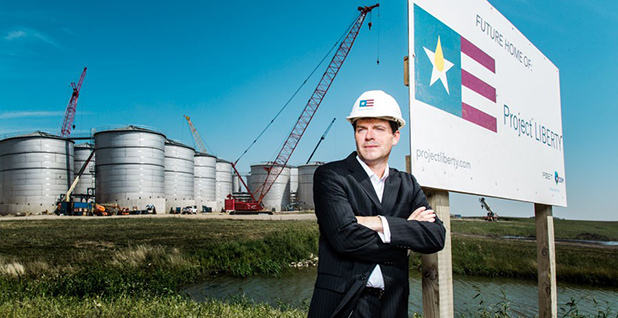 Hugh Welsh. Four hundred Royal DSM executives won’t get 50 percent of their annual bonuses if they fail to meet sustainability and climate goals. It is not a widespread practice in the business world. Photo by Ryan Donnell.

Hugh Welsh makes statements about climate change that people might find strange coming from a businessman. They might even get him fired — if he worked for a different company.

"Your greed and avarice are going to lead to calamity," Welsh said recently of companies that lobby against climate policies in Congress. "At least stop being a bottleneck," he added. "Stop throwing your money to K Street lobbyists."

Luckily for Welsh, his employer, Royal DSM, a Dutch multinational worth $9 billion, is equally aggressive on climate change and backed up its tough talk in 2010 when it unveiled a policy tying executive bonuses to environmental targets, like curbing emissions and water use.

"Cliche, but you gotta put your money where your mouth is," Welsh said. "If you tie an executive’s cash to certain goals, that’s how things get done."

The DSM policy is more aggressive than similar measures by other companies. Statistics on how prevalent this practice is are difficult to pinpoint, even though firms with these incentive plans have deployed them for several years.

Still, while companies have motivated and poached managers with executive compensation packages and dangled stock options for decades, the idea to use financial carrots to meet environmental objectives is new, little known and often vague. It’s also not industry specific.

National Grid PLC, a British utility, and oil sands operator Suncor Energy Inc. have made direct links between bonuses and sustainability, too.

For DSM, which stands for Dutch State Mines, an irony the company cheerfully embraces, this compensation strategy applies to 400 executives worldwide. Half the compensation is tied to sustainability objectives and the other half to traditional financial goals. If employees undershoot their targets, that shortfall could reduce bonuses companywide and chip into directors’ long-term stock portfolios.

"I don’t think there’s been a year since 2010 that I’ve gotten my full bonus, and it’s mostly been because we still struggle with greenhouse gas emissions," said Welsh, explaining that some companies DSM recently merged with or acquired aren’t as energy efficient as other parts of the corporation.

Experts never heard of it

Last fall, DSM promised to eventually use 100 percent renewable energy in all operations, which span six continents, 20,750 workers and 100 sites. In the shorter term, it aims to derive half its power worldwide from renewables by 2025.

The green incentives appear to be working.

Between 2011 and 2015, DSM reduced its energy use 53 percent, its greenhouse emissions 76 percent and its water consumption 34 percent, the company announced Tuesday.

The transition wasn’t all rosy. After DSM announced its new incentive plan in 2010, there was a variety of reactions.

"From the external world, applause. From the shareholders, yawn. From the executives, panic," Welsh said. "The executives freaked out," he added, fretting over the new goal. It took a couple of years to explain why the sustainability targets matter economically.

"But it’s in place now, and we’ve begun to cascade," he said. Now shop-floor supervisors work toward traditional as well as green goals to get their bonuses, and plant managers should share those targets with their teams, he said. "That’s how it’s meant to work."

DSM unveiled a new solar field in Belvidere, N.J., in December 2014, close to one of its plants. The array will provide 30 to 40 percent of the facility’s power.

"That doesn’t happen unless the plant manager’s got a KPI to help with certain sustainability goals," Welsh said, referring to the term "key performance indicator," a generic business term for tracking work. "The knock-on is we can now produce at a lower cost because we have renewable energy."

Green linkage is esoteric even to experts in the fields of finance and environmental studies.

"I hadn’t heard of it before," said Eric Orts, a professor at the Wharton School at the University of Pennsylvania, who teaches courses on environmental law, carbon trading and corporate governance.

Rebecca Henderson, a professor at Harvard Business School’s business and environment program, said by email that "it’s something I know only the most sketchy amount about."

Kellie Huennekens of the Ernst & Young Center LLP for Board Matters said her team hasn’t analyzed the practice of green linkage. In recent years, though, companies reported more of their environmental and energy consumption data than before, and investors are beginning to "price in" financial risks associated with climate change, she said.

"You’re seeing more engagement on these topics generally," Huennekens said, citing a rise in shareholder resolutions in 2015 related to climate issues. But connecting accomplishments to cash is uncommon. "There just hasn’t been a ton. I still think it’s an emerging area," she said. "It didn’t exist several years ago."

Empirical evidence about the subject is extremely difficult to come by, according to Anant Sundaram, a professor at the Tuck School of Business at Dartmouth College.

"Look, it’s still not that common," he said by phone. "Companies are experimenting with it."

A 2012 analysis of 600 American companies by Sustainalytics and Ceres, a sustainability advocacy group, found just 39 companies (7 percent) had tied environmental performance to compensation and 53 more companies (9 percent) have similar policies in place but didn’t disclose "related targets and weights."

Based on those experiences and anecdotal information, Sundaram estimates that fewer than one-tenth, "perhaps something in the mid-single digits," of those 500 firms have linked compensation with sustainability in any way.

"But the fact is that very good, very influential companies are thinking about this," he said.

Aluminum giant Alcoa Inc. has tied 20 percent of its executive compensation package to nonfinancial tasks since 2010, like workforce diversity and emissions reduction, which accounts for 5 percent total.

Beginning in 2008, Intel Corp. made environmental stewardship a portion of every employee’s compensation. Its program sets goals to lower emissions, slow energy consumption and make more energy-efficient products. By 2012, according to Ceres, Intel had cut emissions 23 percent and lowered energy consumption 8 percent.

"This is a very concrete way to send a message," said Shanna Cleveland, senior manager with the Carbon Asset Risk Initiative, a program at Ceres. Yet quantifying companies’ progress in meeting their environmental objectives is often difficult.

"The effectiveness of doing so depends very much on the specifics of the measurements they’re using," she said by phone.

Two companies could, for example, bind part of their annual bonuses to slashing their carbon footprints, but one may base that goal on its entire supply chain and the other only measure its electric consumption, omitting the power that outside suppliers expend.

Some fossil energy companies, whose KPIs are often clearer than other firms because they’re based on universal units like barrels of oil, have linked their compensation to safety and environmental goals.

One effective practice by Apache Corp., an oil and gas driller, is an incentive to use more recycled water when fracking, Cleveland said.

Linkage in part emerged from conversations about income inequality and the disparity between CEO and worker pay, as well as the fact that top executives at energy companies and big banks received large bonuses, or "golden parachutes," despite their involvement in the financial crisis of 2008, according to Cleveland.

"I don’t even see it happening with [chief sustainability officers]," Joe Arvai, director of the Erb Institute for Global Sustainable Enterprise at the University of Michigan, said of sustainability linking. He isn’t sure when the concept emerged — "maybe the last decade at most" — and called it rare.

When a company is doing well and the chief sustainability officer is hitting his or her targets, a firm’s outlook is bright, he said. But as climate science and the private sector become increasingly involved, quantifying how firms improve their environmental practices is tricky.

"There’s a scramble to figure out how to measure impact," Arvai said. "And in the meantime, companies are diversifying to survive and going sustainable in part because, at least for some firms, it’s part of their identity, their brand," he said. "If they don’t do it, they risk being the next Exxon Mobil."

Exxon Mobil Corp.’s knowledge decades ago that company authorities knew of climate risks but hid them from the public "is starting to smell and look like Big Tobacco," he added.

Calculating the efficacy of these incentive programs is easier for the extractive business, Arvai said. But applying the same policies to topics like human rights and social equality can be nebulous.

Sundaram, the Dartmouth professor, is confident these connections DSM and other firms have drafted will be effective.

"All I can say is there is a massive literature on incentives, executive compensation," he said. "I would be shocked if this didn’t work."

Originally from New Jersey, Welsh is tall with sharp blue eyes and dark brown hair. Today, he wears a thin orange necktie, apropos of the Netherlands, DSM’s home. He gets excited and gesticulates when he talks about climate and energy issues. The words can’t escape fast enough.

"The air in China is horrible, you can’t breathe," he said, shaking his head. "People in Beijing are no longer gonna tolerate not being able to go outside for half the year."

DSM is working on its "Clean Cow" project, a feed additive designed to lower methane emissions from cows, and Welsh would "love" to help dairy farmers sell carbon credits generated through their herds’ emission reductions. A basic carbon tax would be "intriguing, exciting," Welsh said. And he thinks governments, industry, academia and nonprofits "have to work hand in glove" to address climate change.

DSM views a carbon tax as an inevitability, and the company is preparing for the day governments enforce such a fee, in particular because people now consider climate change an economic menace.

"That’s why we’re so confident that a carbon fee, carbon tax is coming. Because governments of the world are going to need to find a means by which to raise revenue to deal with climate mitigation," Welsh said. To erect new walls, dikes and pumping systems will cost billions.

"That money needs to come from somewhere. What means are they going to use to raise revenue?" he asked. "It’s going to tax those that the public will hold responsible — the Exxon Mobils — and then that enables folks like us to come with alternatives at a competitive price."

With that, Welsh turned and left, headed to Capitol Hill to meet with the staff of Sen. Sheldon Whitehouse (D-R.I.), the Senate’s strongest climate regulation proponent.