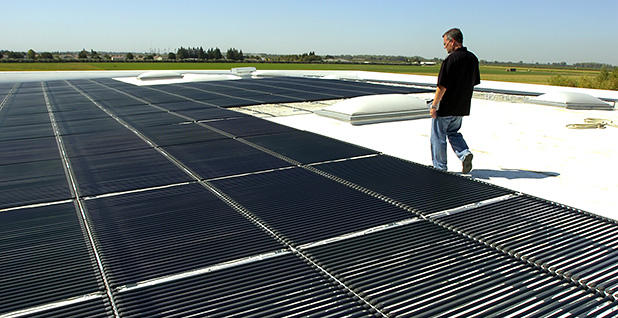 The failure of solar power company Solyndra a decade ago raised questions about federal loan guarantees for clean-tech companies, and such financial assurances have dried up under the Trump administration. A worker is shown here in 2010 walking next to the tubular type of solar panels made by Solyndra. Bart Ah You/ZUMApress/Newscom

The government’s role in commercializing energy technology has reemerged as an election-year issue, while analysts warn that too much zero-carbon energy is stuck in a lab and not yet deployable on a large scale.

About 35% of global carbon dioxide emissions reductions will depend on technologies that are still in the early phases of development, according to the International Energy Agency.

Congress and the Trump administration left aggressive energy technology proposals on the cutting room floor when they passed economic recovery packages this year. But if former Vice President Joe Biden wins the presidency in November, advocates say, they’d like to see the government stoke efforts to bring the next generation of technology to market.

The so-called valley of death remains a common problem for technology companies. That’s the critical period between laboratory development and widespread adoption, when potential long-term investors decide whether new technology that’s unproven on a commercial scale is too risky. More often than not, investors get cold feet.

Federal loan guarantees for clean-tech startups, often worth hundreds of millions, got a black eye a decade ago with the high-profile failure of the company Solyndra, galvanizing conservative dissent. Under President Trump, those loans have all but stopped.

Free-market groups would prefer that it stay that way. "I don’t think this issue has evolved that much," said Nick Loris, an energy and environmental policy researcher at the Heritage Foundation.

One difference between 2008 and 2020, however, is that some big companies are willing to act as patrons for energy startups: Corporations like Amazon.com Inc. and Microsoft Corp. have begun making investments in young companies as part of their billion-dollar climate funds (Greenwire, Sept. 17).

"The calculus behind the private sector — some of these bigger companies getting behind clean energy investments — has changed," Loris said. "That, I think, carries more promise than a government program."

Loan guarantees are back in the sights of Democrats, though. In a letter to party leadership last week, nonprofit Evergreen Action pushed for a revival to be included as part of the House Democrats’ energy package. Led by former presidential campaign staff of Washington Gov. Jay Inslee (D) and Sen. Elizabeth Warren (D-Mass.), the group also cited its "road map for national mobilization," which called on the next president and Congress to create an agency dedicated to clean energy deployment that would back young companies during the difficult scale-up period.

A separate report this month, from a group of researchers that included former Obama administration officials at Columbia University, made similar recommendations for post-election lawmakers (Energywire, Sept. 17).

In the absence of new public investments, they wrote, "promising clean energy technologies that have been proven at the laboratory scale but not yet at commercial scale will continue to be stranded."

The "valley of death" problem hasn’t gone unnoticed by federal scientists, who have taken some limited steps to resolve it.

Officials at the Advanced Research Projects Agency-Energy (ARPA-E), the Energy Department’s flagship agency for high-risk, early-stage technology development, last week announced the first grants from a new program known as SCALEUP. Under the program, ARPA-E provides startups with extra funds for demonstrations, along with a platform to connect with investors.

"It’s an acknowledgement that the average ARPA-E technology, even when successful, is too nascent for the private sector to make an investment in it," said James Zahler, tech-to-market director at the agency.

One study published this month found that ARPA-E’s initial round of 25 grantees were no more successful than their clean-tech peers, although they were more likely to file a patent. The agency has defended its work in part by highlighting the study’s sample size (Energywire, Sept. 15)

Still, investors remain much more conservative toward energy technology than in the years around ARPA-E’s 2007 inception, when venture capitalists drove a boom in interest that went bust only a few years later, Zahler said.

From 2013 through 2019, venture capitalists invested about $60 billion in climate-related technology, with the growth rate nearly doubling each year, according to a PricewaterhouseCoopers analysis this month. The consultancy found that even that was still "too low given the scale of the challenge" and that "more early-stage investment needs to be stimulated."

"There’s been a resurgence of investment in that space, but it’s much more conservative than it once was," Zahler said. "It’s called ‘hard tech’ for a reason. They’re hard to scale up."

What the federal government does to back startups is also taking on deeper shades of geopolitical meaning.

U.S. lawmakers in both parties have often regarded Chinese control of minerals and other supply chains for solar panels and lithium batteries as a national security concern. And this week, Chinese President Xi Jinping said the country would aim for carbon neutrality by 2060.

That may help whet a bipartisan taste for prolonged government backing of early technology, said energy analysts, although it remains unclear among whom.

A spokesperson for Sen. Lisa Murkowski (R-Alaska), chairwoman of the Senate Energy and Natural Resources committee, reiterated the senator’s support for DOE loan guarantee programs but said her office had not reviewed recent proposals for an independent financing corporation for clean energy and other ideas for how to lift technology into the marketplace.

How a Biden administration might treat the "valley of death" problem remains less than crystal clear. The campaign did not answer E&E News inquiries about whether the candidate would jump-start the Energy Department’s loan programs for clean energy. But it quoted several details from the candidate’s climate plan, including a pledge to support deployment of carbon capture systems, create a new research agency focused on climate technology, and invest $400 billion in clean energy research.

Loris, of the Heritage Foundation, said he expects a Biden administration would "plus up" the idled loan guarantees, among other new forms of clean energy spending.

Doing so would invite the same furor from conservative groups as the one sparked by Solyndra’s bankruptcy, he said. But the idea of corporate funds for clean technology, he added, "gives me optimism."

"Some people have said climate change isn’t an environmental problem; it’s a technological problem," he said. "When investors hear that, they get excited."