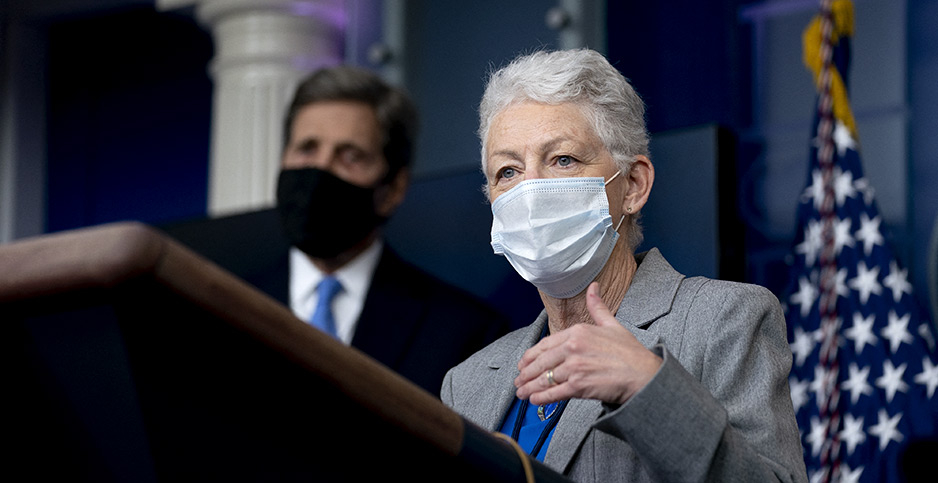 Speaking with reporters as the White House began to make a pitch for the president’s $2 trillion infrastructure plan, McCarthy said the administration considers a clean energy standard an integral part of its effort to reach zero carbon emissions.

"We think it’s one of the best methods to actually get the reductions we’re looking for with a level of certainty," she said, adding that the energy sector "seems to understand that."

Clean energy standards — which generally prod utilities to use cleaner electricity — are working in states that have adopted them, she said. But nuclear energy is controversial, and some environmentalists and some groups have also called on Biden to abandon carbon capture, saying it prolongs the use of fossil fuels.

In his plan, Biden called for an "Energy Efficiency and Clean Electricity Standard," which McCarthy said would be "fairly robust, and it’s going to be inclusive."

The administration would add legislative language to the proposal as it works with Congress to develop a standard, McCarthy said. Members of Congress on both sides of the aisle have been generally supportive of nuclear and carbon capture technology, which aims to capture carbon dioxide emissions from sources — including fossil fuel-powered plants — before the gas escapes into the atmosphere.

"We’re interested in pursuing this and talking to Congress about it and looking at it in a variety of ways," McCarthy said.

She acknowledged that "if there are other ways of doing business, I’m sure the president is open to those discussions. But clearly, we think a CES is appropriate and advisable, and we think the industry itself sees it as one of the most flexible and most effective tools."

Still, the details of a standard could put the administration at odds with the utility sector. Some of the largest investor-owned utilities want to take longer to decarbonize than the White House 2035 timeline.

It’s also unclear how receptive Congress will be. Analysts at investment bank Raymond James wrote in a research note this week that they were "skeptical" that moderate Democrats, particularly Sen. Joe Manchin (D-W.Va.), would back phasing out fossil fuels.

Next: A carbon tax?

McCarthy added that she wouldn’t close the door on a potential carbon tax, but said Biden’s choice to cut emissions is the clean energy standard, along with investments in green energy: "It gets to the kind of reductions that he promised on the campaign," she said.

On the same call, deputy national climate adviser Ali Zaidi said Biden’s plan is "critical" to put the United States on a path to generating 100% carbon-free electricity by 2035.

"We need a more resilient power grid," he said. "We absorb costs in the hundreds of billions year over year as we neglect to invest in this aging infrastructure."

He noted that wind and solar can now be stored in batteries that are 80% or 90% less expensive than they were a decade ago.

The call came as Biden held his first Cabinet meeting and deputized five members to help sell his American Jobs Plan to lawmakers and the American people.

"Working with my team here in the White House, these Cabinet members will represent me in dealing with Congress, engage the public in selling the plan, and help work out the details as we refine it and move forward," Biden said.

Senate Minority Leader Mitch McConnell (R-Ky.) told reporters the plan would not get any support from the Republican side. Unless that changes, Democrats may have to use a Senate budget maneuver to pass the legislation on their own.

Granholm and Buttigeig have already begun the sales job. Buttigeig yesterday cited the Texas power outages to push back against Republican criticism that the plan doesn’t spend enough on traditional infrastructure projects like roads and bridges.

"We saw U.S. citizens, living in Texas, melting snow in their bathtubs to be able to flush their toilets, in the United States of America," Buttigieg said on Fox News. "That is unacceptable. So yes, infrastructure includes energy infrastructure."

And Granholm in an interview with SiriusXM’s "Joe Madison Show" yesterday warned that the United States is falling behind other countries that are investing in green energy, including battery storage and electric vehicles.

Biden has cast the proposal as a jobs bill, and Granholm cited carbon capture technology as a potential job opportunity for fossil fuel workers.

"The technologies that are coming out of our Department of Energy labs are technologies that can be attached to a lot of the gas, the oil … to reduce carbon," she said. "And they can use those skills, in addition to making sure that we continue to have fossil fuels."