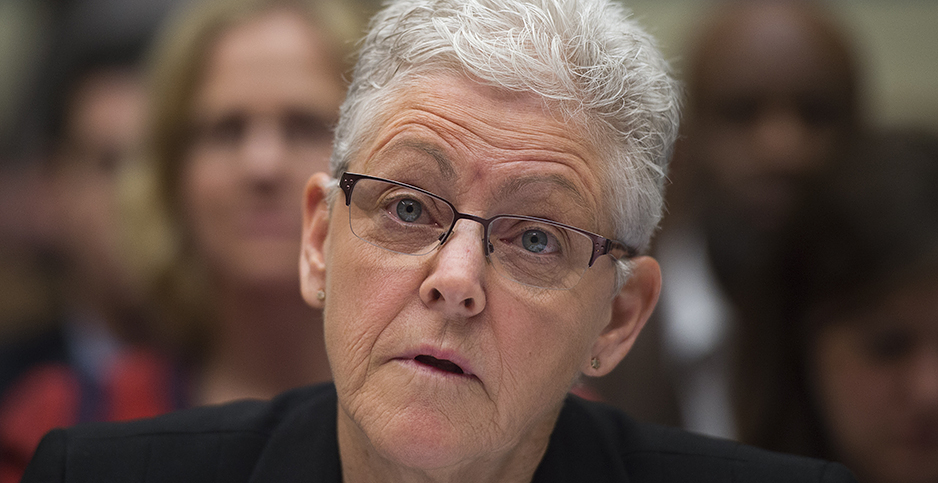 Gina McCarthy, who used her tenure as EPA administrator to build some of the most ambitious climate policies in American history, only to see them evaporate during the Trump administration, will be the top climate adviser to President-elect Joe Biden.

Her appointment was confirmed by two sources close to the transition last night.

McCarthy has a reputation as a bare-knuckle brawler when establishing rules to address climate change and protect the environment. She was a frequent target of Republican lawmakers during the Obama administration and went through a series of contentious congressional hearings as she crafted the Clean Power Plan and other aggressive climate policies designed to slow global warming.

McCarthy is currently serving as president of the Natural Resources Defense Council and initially rebuffed offers to join the Biden White House. Sources close to her said she missed being in the middle of policy battles rather than on the sidelines. One source described her as a "bulldog" who relished the fight.

McCarthy has an "unbelievable depth of expertise and relationships with the obligated parties, with the utilities, the oil and gas industry, and with the auto industry," said a source close to the transition. "She’s long been the person Biden wanted in that role, so it’s not a surprise. It’s a surprise that she said ‘no’ a couple of times."

The decision came as Biden races to fill his Cabinet and top policy positions prior to his inauguration in 35 days. His transition announced yesterday that Pete Buttigieg, the former mayor of South Bend, Ind., was selected as secretary of Transportation, a role that carries climate-related powers such as setting fuel economy standards. Biden is also expected to name former Michigan Gov. Jennifer Granholm as his Energy secretary.

McCarthy’s position in the West Wing, which was first reported by The Washington Post, does not require Senate confirmation. She will be tasked with coordinating the scope of the federal government’s work on climate change and ensuring that the entire government is working to reduce greenhouse gas emissions. That will include agencies such as EPA and the Interior Department, but also the Agriculture, Transportation and Treasury departments, as well as the Council of Economic Advisers and the National Economic Council.

"The climate change situation is dire to the extent that there is no time to waste," said Profeta, who co-chaired the Climate 21 Project, with ties to the Biden transition team. "The less time required for anybody to learn the ropes the better, and Gina clearly knows the ropes very well."

Maximizing the use of executive authorities at the president’s disposal will be particularly important, he said, if the Senate remains in Republican hands after two runoff elections in Georgia next month. Any new climate regulations will face a skeptical Supreme Court.

"Having a leader on the topic who knows the statutes well, knows what’s in the realm of the possible, will help ensure that the Biden administration’s efforts will be durable when they reach the courts," Profeta said.

McCarthy will work closely with the next EPA administrator, who will oversee regulatory action on climate change. Biden has not yet named the agency’s leader. That process has been fluid, as marked by McCarthy’s sudden emergence as Biden’s climate counselor.

Another veteran regulator — California Air Resources Board Chair Mary Nichols — has faded from being the leading contender for the EPA position after environmental justice groups opposed her nomination.

Profeta said McCarthy’s appointment was no substitute for an EPA administrator, whose role is to guide the regulatory process. His group’s recommendations always envisioned a close partnership between EPA and the White House, and McCarthy will likely have a broader focus than just regulation.

Former Michigan Gov. Jennifer Granholm (D) had been the other top contender for the climate adviser job in recent days. The Washington Post reported yesterday that she will be named Biden’s Energy secretary, pending Senate confirmation.

Joining McCarthy as her deputy will be Ali Zaidi, New York’s deputy secretary for energy and environment. Zaidi worked as associate director for natural resources, energy and science at the White House Office of Management and Budget in the Obama administration. Zaidi, 33, had been considered for the climate adviser position but lacks the star power of McCarthy and Granholm.

Environmental groups offered praise for McCarthy last night but made it clear that they expect her to go beyond Obama-era climate policy, much of which was rolled back by the Trump administration.

"As a seasoned environmental advocate, we have high expectations for McCarthy in the White House," said Lisa Ramsden, a senior climate campaigner for Greenpeace. "Passing a Green New Deal-style economic recovery plan would create millions of new jobs with union benefits. Phasing out fossil fuels and initiating a just transition to renewable energy will allow us to avert even deeper climate chaos and expand economic opportunity in the process."

The Center for Biological Diversity issued a tepid endorsement of McCarthy, saying her work in the Biden administration needs to exceed what she accomplished as EPA administrator under Obama.

"McCarthy’s No. 1 job as climate coordinator is to make sure the entire federal government takes bold, urgent action to confront the climate crisis. Unfortunately, during McCarthy’s tenure at the EPA, she enacted far too many timid half-measures that merely tinkered around the edges," said Brett Hartl, the group’s government affairs director. "We hope she’ll push immediately for the bold climate action that is desperately needed now."