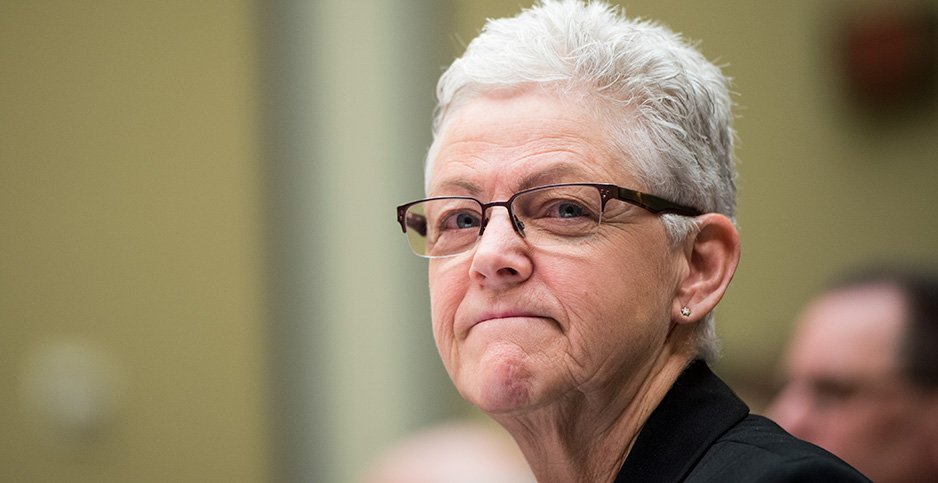 McCarthy has emerged as the top candidate for a domestic climate adviser position that would manage the administration’s global warming work across multiple agencies, two sources close to the transition talks said. If selected, McCarthy would focus on domestic climate policy, while former Secretary of State John Kerry would serve as international climate envoy.

"The White House is going to play a significant role. You want someone who’s got a real level of experience, history and understanding in both the details and the politics and it’s hard to find anybody better than her," said a source close to the talks.

McCarthy has a long-standing relationship with the industries that would be most affected by Biden’s $2 trillion climate action plan, a source said. They includes electric utilities, the oil and gas industry, and the automotive industry. McCarthy has experience getting climate concessions out of industries that resist efforts to cut down on carbon emissions.

But McCarthy also knows her way around a Washington policy dispute.

"She would have had a hard time sitting it out; she’s a bulldog, she loves the fight, she loves being in there," the source said.

News of McCarthy’s status as front-runner was first reported by Reuters. Sources, who spoke on background because they were not authorized to talk on the record, said former Michigan Gov. Jennifer Granholm is still being considered for the climate adviser job, and they cautioned that nothing is final until Biden announces his choice — which could come as soon as this week.

Another development: The idea of creating a separate climate policy council within the Executive Office of the President appears to be dead, sources said. Instead, McCarthy — or whoever is named as domestic climate adviser — would coordinate with senior officials at agencies across the federal government on climate work.

McCarthy’s name has circulated as a top candidate for the position for weeks, but she was initially hesitant to take the job because she recently took over as head of the Natural Resources Defense Council, which just received a $100 million donation from Amazon.com Inc. founder Jeff Bezos. McCarthy was eager to return to the administration at some later point, the sources said. That timeline appears to have changed in recent days.

Early on, the team looked at Ali Zaidi, New York’s deputy secretary for energy and environment, for the position. Zaidi worked as associate director for natural resources, energy and science at the White House Office of Management and Budget in the Obama administration, but he doesn’t have McCarthy’s experience crafting meaningful climate policy at high levels while also battling Republican lawmakers who reject regulations on fossil fuels, one source said. Zaidi is still expected to enter the administration, either as a deputy to the climate adviser position or as a senior official at the Department of Energy, the source said.

One reason McCarthy’s name rose to the top is because Mary Nichols, Biden’s top choice to become EPA administrator, faced extensive criticism from environmental justice groups, who said she ignored their concerns while on the California Air Resources Board, especially about how the state’s carbon cap-and-trade program might concentrate pollution in underprivileged areas. As Nichols’ chances of working in the administration have declined, some thought it important to recruit someone with extensive experience implementing climate regulations.

The White House position does not need Senate confirmation — an advantage, given McCarthy’s hard road to confirmation at EPA eight years ago (Climatewire, Dec. 14). Nichols, too, was expected to face considerable pushback from Senate Republicans after years as the public face of California’s resistance to President Trump’s deregulatory agenda at EPA.

Institutional knowledge of EPA’s rulemaking process, as well as the use of the Clean Air Act for federal climate regulation, could be useful for the Biden administration if Republicans maintain control of the Senate. And Trump’s success in stocking the Supreme Court and the judiciary with conservative justices and judges means that the Biden administration will have to rely on a modest legal interpretation to write rules that deliver significant greenhouse gas emissions benefits.

McCarthy’s experience could come in handy there. A former state environmental official in both Massachusetts and Connecticut, McCarthy served as EPA’s air chief in the first Obama term, during which EPA crafted its finding that greenhouse gases endanger public health and welfare. That finding formed the basis for Clean Air Act regulations for carbon dioxide and other greenhouse gases.

McCarthy was confirmed to lead the agency in 2013. As EPA administrator, she oversaw the implementation of Obama’s sweeping second-term Climate Action Plan, which included Clean Air Act rules for power plants, oil and gas methane leakage, hydrofluorocarbons, and other major sources of climate pollution.

The Trump administration since has pulled the plug on most of those rules, replacing them with alternatives that do less to protect the environment.

McCarthy told Rolling Stone in October that she found the scope of Trump-era deregulation "discouraging."

"I had no idea that they would come in and decide to dismantle everything," she said.

As Biden’s climate czar, McCarthy would have a hand in helping a new EPA administrator revive and build on Obama’s climate legacy. She’d also facilitate climate action at the Interior Department, Energy Department and other domestically focused agencies.