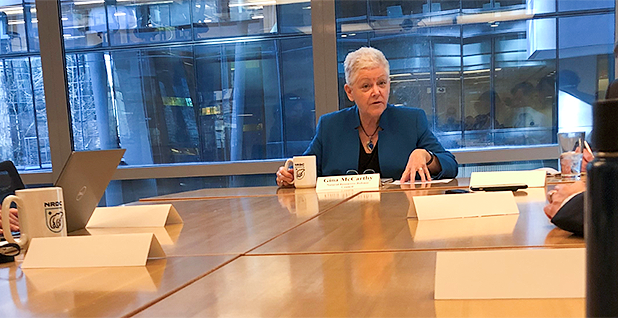 Gina McCarthy wrapped up week two as head of the Natural Resources Defense Council by laying out her goals to reporters for what will be a pivotal year in energy and environmental policy.

The former EPA administrator, who led the agency during President Obama’s second term, started last week as head of NRDC, one of the country’s most prominent environmental organizations. She spoke this morning to reporters at the group’s Washington office.

Her former agency, now under the direction of the Trump administration, has set about undoing a good portion of her work on air, climate and water regulations, much of which will be finalized this year and then likely challenged in court. President Trump is up for reelection, and Democrats running to be his general election opponent have offered ambitious plans to combat climate change.

All the while, NRDC prepares to be a major player in the debate — with lawsuits, lobbying and political campaigning to make its voice heard in Washington.

Leaving EPA in 2017 when Trump took office, McCarthy joined Harvard University in her native Boston and remained in the public eye as a vocal critic of the administration. But taking the reins of NRDC will give her a high-profile platform to elevate environmental goals and an impressive litigation team to counter the Trump EPA’s rollbacks.

"I want to be there to talk about the already existing ways in which we can move forward on climate, irrespective of the actions of the federal government," said McCarthy, who is working out of NRDC’s headquarters in New York City.

"I’m trying to go to NRDC not with what we can stop, as much as a combination of we will stop bad things but we are going to push really hard to talk about the tremendous benefits" of solutions for climate change, she said.

Industry groups like the American Petroleum Institute have begun to pay more heed to climate change and how they can be part of the solution, too. McCarthy takes that as a sign of progress but stressed there must be a transition to renewable energy, not growing dependence on natural gas.

She also said, "I think the conversation should not be limited and will not be limited at NRDC to just ‘climate change.’ It has to really look at whether or not fossil fuels are causing similar problems in other venues."

McCarthy noted how others make fun of those not using plastic straws. She doesn’t, saying it’s a step in the right direction.

"It’s called getting people to start thinking and caring about something. Then more will happen," she said.

McCarthy also discussed changes underfoot at the Trump EPA that concern her, including the agency’s proposal to limit what public health studies it uses in crafting regulations.

"The things I worry about the most is protecting the science. Science and scientists are facing real challenges today, and I think they should be supported," McCarthy said. "The so-called secret science [proposal] is challenging."

She is also watching EPA’s mercury air and toxics standards — the agency has proposed to scrap its justification — saying that is one of the "fundamental challenges to the rules of the road."

"It certainly makes my pulse rate go up when I think of some of these things," McCarthy said. "I mean, I worked hard. I think we did things well when I was at EPA. We did the best we could."

Environmental rules will need to be protected too, she said, like California’s waiver under the Clean Air Act, which allowed the state to set tougher auto emissions standards. EPA has now pulled back that waiver, an action that is being challenged by litigation.

"The job, I think, we have is to have California push the envelope with its waiver. That has been the law of the land," McCarthy said. "If they lose that waiver, which I don’t believe they will, but if they should do that, we have to once again worry about whether the federal government is going to lead."

McCarthy also is watching for the release of EPA’s redefinition of the Waters of the United States rule, calling the Trump version for wetlands protection "a very creative proposal." She noted it has been challenged by the agency’s own Science Advisory Board. The final rule is expected to be issued soon.

NRDC also expects to be a big political player this election year.

McCarthy, speaking as head of the NRDC Action Fund, said it will spend substantial funds on campaigns and candidates in 2020, although she didn’t offer an estimate. In addition, NRDC’s 501(c)(4) nonprofit political affiliate will make endorsements in the presidential race as well as House and Senate campaigns.

McCarthy avoided discussion of specific candidates but did say: "If you look at the entire slate of Democrats, they’re all talking and outdoing one another with climate plans. I find that incredibly exciting."

Asked about the American Petroleum Institute’s plans to oppose fracking bans offered by some Democratic presidential candidates, McCarthy said NRDC would be endorsing efforts to move to "a clean energy future," adding that the science requires it.

McCarthy also said she would not return to EPA if she was asked to by an incoming Democratic president, saying she is excited about leading NRDC.

"I would not be interested in that. I really enjoyed the time I was in Washington, sort of," McCarthy said. "It would be an honor, but it’s an honor I’m going to defer. I did my time."