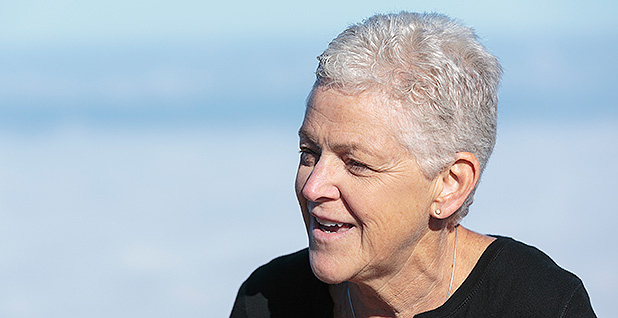 The outgoing U.S. EPA administrator tries to restrain her colorful language, but at times she can’t help letting it out, she said in a recent interview.

McCarthy is preparing to pack up her office at EPA after nearly eight years in the Obama administration. She’ll head home to Boston but doesn’t plan to retire anytime soon.

As one of President Obama’s top environmental officials, McCarthy has been at the center of some of the biggest political fights in recent years, frequently finding herself on the hot seat on Capitol Hill as irate Republican lawmakers hammered her policies.

McCarthy recently chatted with E&E News about her strategy for surviving those hearings, how she considers Guinness stout a "food group," and her advice for President-elect Donald Trump’s EPA administrator.

What’s been your proudest single moment as EPA administrator?

It was probably when I introduced the president for the announcement of the final carbon pollution plan — the Clean Power Plan is what I should call it. It just was a great moment for me.

What was your worst day on the job?

It was any day during the furlough, was my first day. During the furlough, I did start calling people that were at home that were people in the agency that were furloughed just to check in on them, and that made every day a little bit more worthwhile because it was really fun to talk to them, but those were horrible days. I felt terrible for the agency, but they kept themselves busy and productive — not doing agency work, that would have been wrong.

What did you do to psyche yourself ahead of congressional hearings that weren’t always friendly? Did you go to the boxing gym? Did you listen to loud music?

I spent an obsessive amount of time preparing for those so that I can be comfortable for every question that may come at me, and I think I did a pretty good job. The other thing I always do, and you’d see it if you watched when I go in, I look around at the room I’m in and I try to remind myself that it’s really quite an honor to be there and to testify, and it helps. It helps a lot.

There’s so many. I love the SNAP program. It basically is looking at new chemicals that are replacing ozone-depleting [chemicals], and I just think it’s — forgive the pun — snappy.

What would you title your autobiography?

Who should play you in the movie?

I definitely think it should be Meryl Streep, only because it would guarantee to make the movie popular. It would definitely be somewhere in the mix in the Academy Awards. Probably as most boring but best acted.

On Fridays, at times when I’ve had a tough week, my favorite song to listen to is "The Dog Days Are Over" [by Florence and the Machine]. It’s really fun. When I was the assistant administrator, I didn’t have my protective services, so I always used to take the train home [to Boston], the train up to BWI, where I could then catch the flight, and it was a great song to listen to. It made me so excited.

I know you’re a beer fan. What’s your favorite?

To be really honest, and I know this will sound ridiculous, but it is, by far, Guinness. I’m Irish, and people would say, "Oh, you’re just saying that." I don’t drink it often because I want to make sure that I keep my svelte figure — or at least pretend I do — but it’s a food group. It’s a really good drink to have because it lasts a long time and you can chitchat over it and it’s really fun.

What’s your guilty pleasure on TV?

There’s no question, I’m obsessively watching the Food Channel. It’s that and "NCIS." … I love when I’m busy on the weekends with work, they have those marathons where you have every "NCIS" over and over and over. I just love the way life usually ends up nice and neat and clean at the end and the home of the free and the brave.

I’m not a particularly nitpicky person. I try to let go of little things. My pet peeves turn into just big aggravations rather than pet peeves. I like people to be prepared for stuff. I don’t like wasting time. When you’re really busy, that’s kind of annoying. I like people to come prepared to talk about things and get stuff done.

Swearing. Hopefully, it’s to myself, but at times it’s not.

Gina is my best nickname, because my real name is Regina. My sister-in-law calls me Beanie because I had an aunt that used to call me Gina Beena, and somehow it evolved into that. My kids call me Ma, M-a. Can you believe that? … They started it as an aggravation, and it stuck for the rest of their life. … It sounds like a goat. But I answer to it because it’s kind of cute.

Aside from EPA administrator, what would your dream job be?

Eating for a living would be fun. Food critics do, that wouldn’t be a bad job to have.

Who’s the most fun member of the Obama Cabinet?

There’s actually a bunch of them, but probably the one that I think is most fun is [Labor Secretary] Tom Perez. Tom sort of knows my neck of the woods, and he’s fun to be with, and he’s always animated. I really enjoy his company. Both he and his wife are great people.

What are you most looking forward to after leaving the administration?

Not having to check my emails all the time. You get sort of so used to being obsessive with your emails. That is a pet peeve of mine, is people sitting in front of you while you’re talking and having them checking their emails, it’s kind of annoying. Even when it’s like a one-on-one. … Nothing like a direct "Boy, are you boring." … I’ll kind of like being disconnected.

What are your post-administration plans?

My post-administration plans are to actually get to know my husband again. That would be really good, because we haven’t really lived together in almost 14 years. I’ve been commuting a lot of that time, and so it’ll be a challenge to see if our 36 years of marriage dissolves within seconds, or whether or not we can make a go of it [laughs].

You’re heading back to Boston?

I am. But beyond that, a lot of, I think, opportunities are out there, and I really need time to think about them and figure out what to do. But I’m not in any way ready to retire. I’m still in my head about 32 years old and wondering what my next career path is, so I’m not going to give that up for a long time.

If you had to leave your successor — likely Scott Pruitt — a one-sentence note of advice, what would it say?

Get to know the agency, and listen to the career staff; they’re extraordinarily smart, and they perform the mission of this agency exceedingly well.