Gina McCarthy: Trump EPA on a ‘search and destroy’ mission 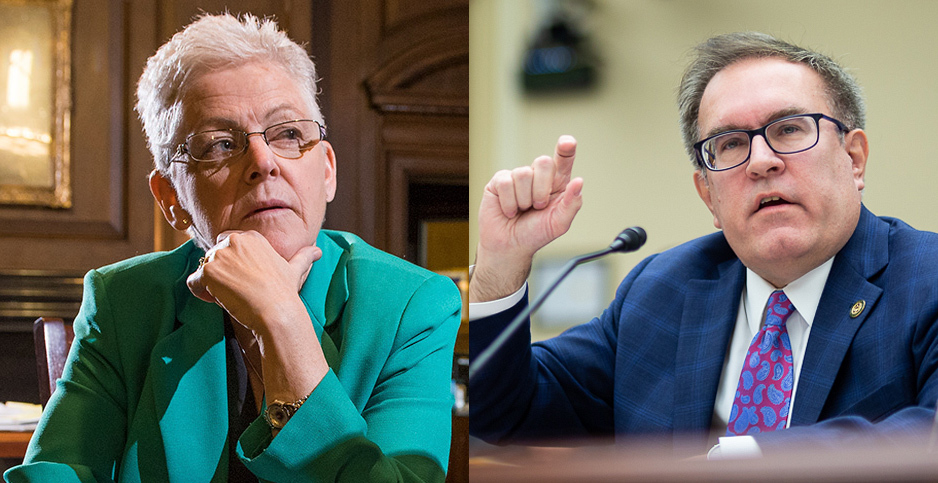 "They just had an outcome in mind, and they decided they were going to achieve it come hell or high water, and they made stuff up," the former Obama administration official said. "They changed the way the law usually works."

McCarthy, who is now the president of the Natural Resources Defense Council, was the keynote speaker at the American Bar Association Section of Environment, Energy and Resources conference.

Pruitt was "less prepared for the job and less effective than Wheeler," she said, and the latter has been undoing public health and climate protections through creative means.

Rolling back Obama-era environmental rules has been a cornerstone of the Trump administration, including at EPA, which has undertaken more than 60 deregulatory actions.

"It seems like all those eight years ended up being just a little target practice for the next administration," McCarthy said.

The Trump EPA has defended the deregulatory push, maintaining that it has continued to protect the environment.

"The results under President Trump speak for themselves as we have provided tangible environmental and public health wins for Americans across the country," EPA spokeswoman Molly Block said.

She emphasized that air pollution has decreased 7% and toxic cleanup sites have been delisted from the Superfund program. The agency has also previously touted that the deregulatory work has saved $95 billion in regulatory costs.

McCarthy, however, zeroed in on EPA undoing the legal underpinnings of the Mercury and Air Toxics Standards, or MATS, a major Obama-era rule that set stringent limits on toxic emissions from the power sector. She said that "industry didn’t want" the rule changed and that the administration was seeking to undermine the use of public health "co-benefits" in determining whether it was "appropriate and necessary" to set standards under the Clean Air Act.

"The longer this administration is in place," McCarthy said, "the more they are getting creative."

Block took issue with those remarks.

"Gina McCarthy has made numerous public comments that her intentions on the MATS rule was purely about regulating companies out of business, not following the law," Block said in an email. "Our MATS rule responds to direction from the Supreme Court, which said McCarthy erred in promulgating the flawed MATS rule."

In a 5-4 ruling, the Supreme Court in 2015 ruled that the Obama EPA failed to properly consider costs when it issued its MATS rule. But the decision from the high court was considered limited; it didn’t throw out the regulation entirely. EPA later issued a "supplemental finding" that said the cost considerations wouldn’t have affected the rule.

The rule is still in place, though without the legal underpinnings the Trump administration has removed. One coal company has since challenged it again in court.

McCarthy said she joined NRDC because of its success in challenging the current EPA. She noted that they have sued the administration about 100 times and have won in 92% of the cases that have been settled, which is now nearly 80.

She repeatedly mentioned that if Democratic presidential nominee Joe Biden wins the election, the next administration will work on "rebuilding" the agency.

"I’m not sad about where the world is," McCarthy said. "I’m angry that we’ve lost time."