Gina McCarthy: White House to use ‘regulatory authority’ on climate 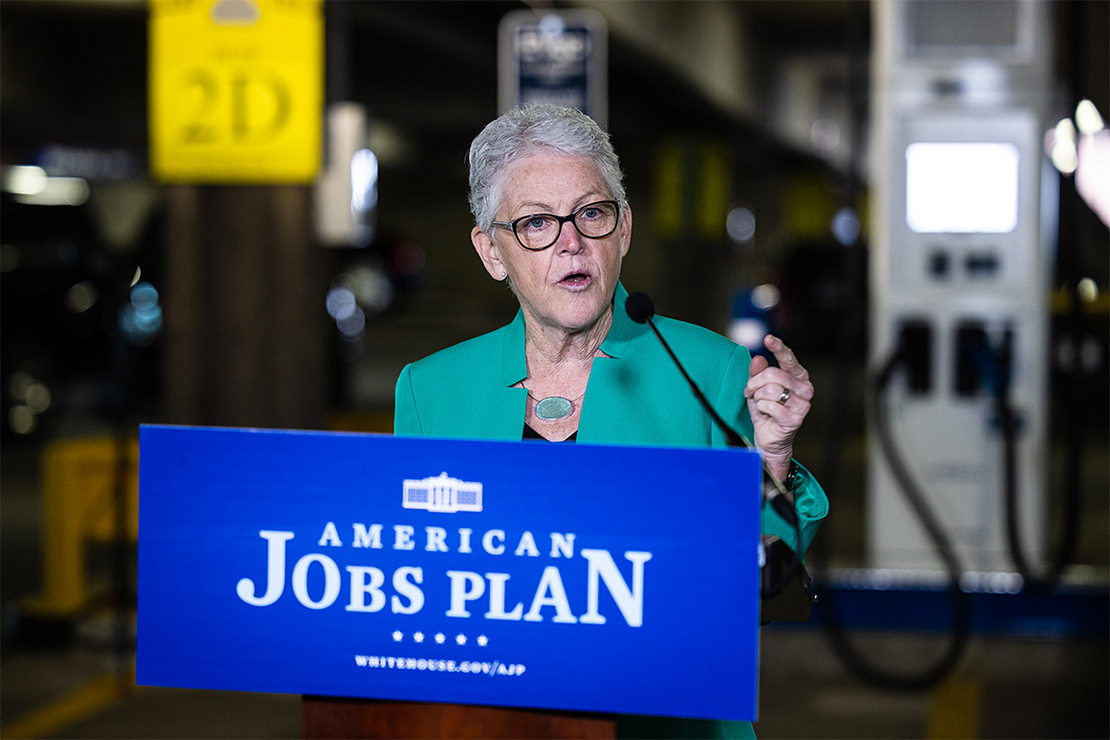 The Biden administration will use its “regulatory authority” to act on climate change if it can’t get Congress to enact a clean energy standard, White House climate adviser Gina McCarthy vowed yesterday.

McCarthy’s remarks at a Bloomberg Sustainable Business Summit came as the administration presses lawmakers to include one of the chief pillars of President Biden’s climate plan in a budget resolution that could be passed without Republican support.

The CES, which would require utilities to adopt green energy, was a Biden priority but was left out of an emerging bipartisan infrastructure plan. McCarthy stopped short of saying it would be a “red line” for the administration if it’s not in a budget resolution being considered along with the infrastructure package.

“We have lots of regulatory authority that we intend to use, regardless, and we’ll move forward with those efforts to try to tackle the climate crisis,” McCarthy said. She added that several of the climate proposals that were not included in the bipartisan infrastructure framework are the “focus of intense discussion” as the Senate prepares to take up both packages.

Senate Majority Leader Chuck Schumer (D-N.Y.) said yesterday that the chamber must address climate change “in a bold way,” pointing to rising temperatures in the Pacific Northwest and severe drought across the Southwest.

“The issues of climate change and infrastructure cannot be separated from one another,” he said on the Senate floor.

McCarthy, who last month called both the CES and $300 billion in clean energy tax credits “non-negotiables” for efforts to address climate change, said she expects the tax credits to be included in the budget resolution. Biden has sought to expand incentives for wind, solar and electric transmission.

She said the CES would send a similar message to electric utilities.

“It says, ‘Go — don’t wait, go,’ because we are going to put you on a schedule that says you get out of the gate and run, and you keep running,” McCarthy said. “Without that, there’s going to have to be a regulatory strategy to move that forward.”

Thirty states and the District of Columbia already have versions of clean electricity standards, but a federal standard would allow the government to “get the kind of impacts, at scale, that we really need to have now,” she said.

She said the administration would continue to work with states.

“We are definitely seeing states embracing the advantages that renewable energy brings, understanding that we need to make grid investments, moving forward so that we don’t have the kind of insecure system that isn’t able to handle the kind of temperature extremes that we’re seeing,” she said. “I have great faith in states moving forward.”

She said the energy industry is also increasingly seeing renewables as inevitable.

“The generators themselves see that this is the future,” she said, adding that the administration is not “fighting with Edison Electric Institute or anybody” — a reference to the group that represents investor-owned electric utility companies, which has indicated that it could support a federal clean energy standard with some caveats.

“We’re just looking at what’s reasonable and how do we move forward,” McCarthy said.

She said that the government can’t do it all, but can encourage private investment, citing the Department of Energy’s research and technology work.

“In the end, it’s going to all be about ‘how did we show the private sector where money could be made,’” she said. “If we can do that, then it’s just going to climb; the momentum is going to be at the high bar that we need to be in order to address the climate crisis in a timely way.”

McCarthy also said the administration isn’t ruling out taxing carbon-intensive imports as part of its effort to counter climate change.

“It’s not off the table, certainly, in any of the discussions,” McCarthy said, adding, “There are many ways in which you could look at a carbon border adjustment as an opportunity here.”

But McCarthy downplayed efforts to impose a domestic carbon tax.

“I don’t disagree with folks that are pushing on carbon pricing as a whole, but I do think there are other strategies that may be more beneficial both in terms of putting an immediate boost into the system for the kind of clean energy investments that we’re looking for and also ensure the president’s commitment to equity and justice,” McCarthy said.

She said a price on carbon “could end up landing on consumers, and we simply don’t want that; the president wouldn’t tolerate that.”

Without congressional action, however, Biden’s ability to enact sweeping changes to steer the country away from fossil fuels would be curtailed. His potential executive action has limits, and some of it would likely be challenged in court.

Still, the administration has already moved without Congress on several fronts, including rejoining the Paris climate accord and seeking to overturn many of the Trump administration’s environmental rollbacks through regulatory and executive action, such as pledging to update dozens of energy efficiency standards.

The administration is also conducting a review of the national oil and gas program that observers say might lead to curtailed production from public lands and the Gulf of Mexico. But so far, production has only increased under Biden, and a goal to restrict federal oil may prove difficult, given the volume of existing drilling rights held by the oil and gas industry (Energywire, July 13).

Meanwhile, the White House is trying to bolster the growth of clean energy projects, including by permitting more than a dozen offshore wind farms in the Atlantic. That support is aimed at unleashing a boom for the offshore wind sector, helping Northeastern states displace the fossil fuel plants that undergird their electricity grids.