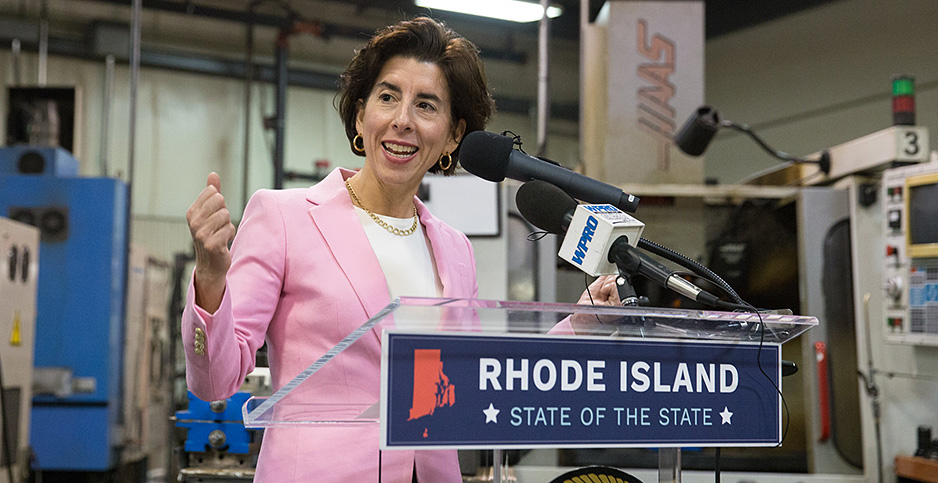 The dispute concerned a plan to limit fishermen’s financial losses associated with a proposed $2 billion offshore wind project. Many boat captains felt the deal undervalued their catch, and they directed their ire at Raimondo, an outspoken offshore wind advocate, accusing her of freezing the fishing industry out of negotiations with Vineyard Wind, the project developer.

At a meeting of the state’s Coastal Resources Management Council that February, many lined up to blast the package. Council members, who are appointed by the governor, expressed sympathy for the concerns but argued that it represented the best offer. They ultimately signed off on the deal.

Fishing companies, incensed by the decision, turned their attention to NOAA Fisheries, the federal agency tasked with assessing the project’s impact on fish stocks. One outspoken critic wrote an email to NOAA staffers the next day calling the deal "an absolute roll over of the fishing industry" (Climatewire, Oct. 25, 2019).

A NOAA official wrote back a week later saying that many at the agency shared the concerns, foreshadowing a decision from the agency two months later not to sign off on a draft environmental study conducted by the Bureau of Ocean Energy Management, the lead federal permitting agency.

The incident marked the first chapter in a two-year saga that thrust Vineyard Wind’s future into doubt and rocked America’s nascent offshore wind industry. But it might have been forgotten had President Biden not nominated Raimondo to serve as the next Commerce secretary, a position from which she would oversee NOAA and many of the thorny questions associated with siting wind turbines in the ocean.

"She believes in offshore wind, promotes it and is 110% behind it. That is why Biden wants her," said Fred Mattera, who leads the Commercial Fisheries Center of Rhode Island, echoing a widespread sentiment in Rhode Island’s fishing and offshore wind industries.

Offshore wind has yet to play a significant role in Raimondo’s confirmation proceedings. Her nomination sailed through committee on a 21-3 vote, only to be delayed by a hold placed by Sen. Ted Cruz (R-Texas) over the governor’s refusal to state that she would keep the Chinese telecommunications giant Huawei on a federal trade blacklist.

But wind supporters and critics alike see her nomination as an attempt to address the logjam of federal offshore wind permits piled up along the East Coast. Developers have acquired 15 leases up and down the Atlantic coast in recent years, spurred on by state deals to buy large amounts of renewable energy. Yet only two pilot projects have succeeded in sinking steel in the water to date, in large part due to concerns from fishermen over the industry’s impact on their livelihoods.

In nominating Raimondo to lead the Commerce Department, Biden has selected a governor with a unique background to solve offshore wind’s permitting woes.

Rhode Island is home to the Block Island wind farm, a small five-turbine facility that represented the country’s sole offshore foray until a second pilot project came online in Virginia last year. It is also the only state with a special area management plan, known as OSAMP, designed to facilitate offshore wind development by mediating siting challenges with other ocean users.

OSAMP predates Raimondo’s time in office, but the governor recognizes the process was critical in bringing Block Island to fruition, said Michael Healey, a spokesperson for the Rhode Island Department of Environmental Management.

"By bringing fishermen and other interests to the table, Rhode Island was able to balance interests through the marine spatial planning process that resulted in clean energy, environmental, and economic benefits," he wrote in a statement. "Across many policy initiatives, Governor Raimondo has shown that she works productively with peers regardless of political affiliation to help achieve positive outcomes."

Many energy analysts believe offshore wind is a crucial cog for greening the northeastern United States, a region where onshore renewable potential is limited (Climatewire, June 15, 2020). Northeastern states have made the industry’s growth a central part of their climate plans, dialing up deals to buy large amounts of power from offshore developers.

Biden has seized on the issue, making the industry’s growth a priority. In his first weeks in the Oval Office, the president signed an order to double offshore wind generation by 2030 and installed Amanda Lefton, a former New York official, at BOEM, an agency traditionally focused on oil and gas development in the Gulf of Mexico (Greenwire, Feb. 1).

The bureau recently announced it would accept a revised permit application from Vineyard Wind, which withdrew its application in the waning days of the Trump administration amid speculation that then-Interior Secretary David Bernhardt was poised to issue an adverse decision (E&E Daily, Feb. 3). Bernhardt had expressed reservations about offshore wind, citing its impact on fishing.

Raimondo would represent another strong offshore wind voice in the Biden administration. Ørsted A/S, the Danish wind giant, has opened two offices in the state in large part thanks to the governor’s advocacy for the industry. The company acquired Block Island in 2018; has signed a deal to sell power to Rhode Island utilities from its proposed Revolution Wind project; and is developing a third project, the South Fork development, off the state’s coast. In October, Raimondo announced plans for the state to secure an additional 600 megawatts in offshore wind capacity.

"She’s a bold, innovative and tireless leader committed to real solutions that grow our economy and expand our workforce," David Hardy, the CEO of Ørsted’s U.S. operations, said in a statement. "As the governor of the state that launched America’s offshore wind industry, she’ll bring to the Cabinet a first-hand understanding of why our growing industry will be so critical to America’s post-COVID economic recovery."

But many fishermen in Rhode Island are skeptical, in large part due to their negotiations with Vineyard Wind over a mitigation package. Under Rhode Island’s regulatory process, wind developers submit a mitigation proposal to an advisory board comprising fishermen.

The advisory board ultimately makes a recommendation to the Coastal Resources Management Council, which then decides whether to accept the package.

In the Vineyard Wind negotiations, the two sides were separated over the size of the deal. The deal creates two funds providing $16.7 million to help fishermen offset losses from the project.

Fishermen said the federal statistics used by Vineyard to estimate its offer underrepresented the value of their catch. A state study estimated their losses at $35.6 million over 30 years.

The disagreement played out in the Rhode Island press, with fishermen accusing Raimondo of refusing to meet with them even as she sat down with Vineyard officials. A spokesperson for the governor told the Providence Journal at the time that those meetings concerned an economic development plan for Rhode Island rather than the mitigation plan.

"We were getting nowhere with her, but Vineyard Wind was. Come to your own conclusions," Mattera said. He expressed concern that Raimondo would take a similar approach with projects planned along the East Coast. "That is why I say I’m really cautious and I hope she uses appropriate science. Don’t let this get out of hand."

Vineyard Wind is an 800-MW project proposed for federal waters south of Martha’s Vineyard, Mass. It has a deal to sell its electricity to Massachusetts utilities. The company has made several concessions to fishing interests, rearranging its layout and reducing the original number of turbines from 104 to 62.

A spokesperson for the developer declined comment for this story.

Not all fishermen are as pessimistic about Raimondo’s appointment. It was clear the Biden administration was going to appoint offshore wind supporters to posts in the administration, said Annie Hawkins, who leads the Responsible Offshore Development Alliance, which represents fishing interests. Given that, it is positive that Biden selected someone who understands the nuance of fishing issues.

Hawkins said she hopes the administration prioritizes permitting reforms that allow fishermen to engage earlier in the process, giving them greater say in where turbines are placed and avoiding conflicts in subsequent planning phases.

"In general, I see it as encouraging. Rhode Island is the only state in the country that put together a comprehensive plan for mitigation," Hawkins said. "Hopefully, we can collectively figure out how to improve it and grow it to an approach that is going to make more sense regionally and nationally."

Offshore wind has received scant mention since Biden tapped Raimondo for Commerce secretary. Commerce is a sprawling department, with more than 46,000 employees and oversight of major agencies such as the National Weather Service, the Census Bureau, and the National Telecommunications and Information Administration.

At her confirmation hearing, senators peppered Raimondo with questions over tariffs, broadband internet access and efforts to revive the economy.

Raimondo, for her part, provided some hints of her approach. In her prepared remarks, the Rhode Island governor told the committee that "we need to recognize that tackling climate change goes hand in hand with creating good-paying jobs" and said the Commerce Department is well suited to help with its array of economic and scientific expertise.

Asked by Sen. Dan Sullivan (R-Alaska) if she would support an all-of-the-above energy policy, Raimondo sought to downplay her role, saying, "Obviously, as Commerce secretary, I will not be playing a primary role on President Biden’s team as it relates to energy policy."

She added, "As it relates to NOAA, I think that as Commerce secretary, should I be confirmed, I will have the opportunity to help create thousands of jobs with offshore wind in particular."