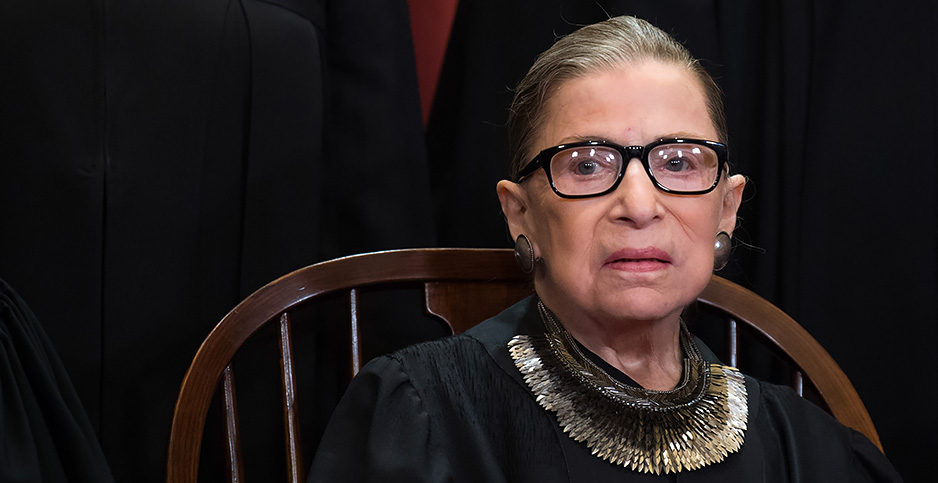 The passing of Supreme Court Justice Ruth Bader Ginsburg could shake the foundation of America’s bedrock environmental laws, leaving a chasm on the bench where once sat an environmental champion.

Ginsburg, who died yesterday, was the Supreme Court’s longest-serving liberal justice and was best known for her advocacy on women’s rights. But she also played a critical role in opening courtroom doors to green groups and established broad interpretations of the Clean Air Act, Clean Water Act and other laws.

"If the Trump administration is able to get her successor confirmed … it could mean that the environment always loses in the Supreme Court for a whole generation," said Robert Percival, head of the University of Maryland Carey School of Law’s Environmental Law Program.

Ginsburg was not an administrative law buff — her speciality and passion was civil procedure — but she was always engaged in environmental cases and frequently played a determinative role.

"In the environmental cases, she often asked the questions that guided the final opinion," said John Cruden, the former assistant attorney general of the Environment and Natural Resources Division at the Department of Justice.

Ginsburg was particularly influential in a handful of environmental cases, including one air pollution case where she struck down a decision Brett Kavanaugh made on a lower court, before he became a Supreme Court justice.

Ginsburg’s most notable environmental ruling concerned whether environmental groups can seek penalties against a company discharging more pollutants than allowed under its Clean Water Act permit.

In Friends of the Earth Inc. v. Laidlaw Environmental Services Inc., Ginsburg in 2000 reversed an appeals court ruling that dismissed the case as moot because the company had stopped operating the facility releasing pollutants into the North Tyger River in South Carolina.

Ginsburg wrote that the company could restart operations — and their resulting discharges — any time, so the case couldn’t be dismissed.

Ginsburg held that Friends of the Earth had suffered "injury in fact" and therefore had standing because they had risen "reasonable concerns" about the discharges and that they affected their "recreational, aesthetic, and economic interests."

That holding had enormous consequences for the ability of environmental groups to bring lawsuits without being dismissed in an early stage of the case.

At the time of the decision, conservatives like the late Supreme Court Justice Antonin Scalia were taking an increasingly narrow view of standing, said Vermont Law School professor Pat Parenteau.

Scalia, Parenteau said, was "engaged in a slash and burn campaign through the law of environmental standing, erecting ever higher barriers for citizen access to federal courts."

But Ginsburg, he said, "turned the tables and convinced Justice Anthony Kennedy to join an opinion recognizing that citizens who have a ‘reasonable concern’ that violations of environmental laws could harm their use of natural resources was enough to have their cases heard."

And indeed, Scalia, a close friend of Ginsburg’s, dissented in the case. He wrote that the majority had created "watered-down requirements for initial standing."

Ginsburg was also a force on the Clean Air Act.

In 2014, she penned a 6-2 decision that revived the Obama administration’s effort to regulate air pollution that drifts across state lines.

Cruden noted that her opinion in EPA v. EME Homer City Generation showed that Ginsburg "was a compelling advocate for the environment."

The case also represented the only instance that the Supreme Court reversed an opinion of Kavanaugh’s while he was a judge on the U.S. Court of Appeals for the District of Columbia Circuit.

In an "extremely important decision," Cruden said, "she wrote that the Kavanaugh opinion had failed to take into account the complexities of air pollution and would create a standard that’s nearly impossible to meet."

But she joined the majority in a prior case, Massachusetts v. EPA, which said in 2007 that the federal government had a duty to regulate carbon emissions under the Clean Air Act (Greenwire, Sept. 18).

She joined dissents in major Clean Water Act cases that argued for broader applications of the statute and was part of the court’s unanimous 2018 decision in National Association of Manufacturers v. Department of Defense, which said Clean Water Act lawsuits must first be heard in district court.

Clean Air Act disputes, by contrast, are typically consolidated in the D.C. Circuit.

Tim Bishop, who argued the case on behalf of the industry challengers, said Ginsburg’s vote in NAM was particularly impressive because it contradicted her view in an earlier decision during her time on the D.C. Circuit that said the judiciary should adopt a "practical" approach on the issue, rather than remain tied to the "cramped" one outlined in the statute.

"I think that switch reflected Justice Ginsburg’s recognition that there has been a big change in the way the Court approaches statutory interpretation over the past 35 years and that the days of judges making up interpretations because they make more sense than what Congress wrote are over," said Bishop, a partner at the law firm Mayer Brown LLP.

"She wisely chose to fight battles that might still be won, rather than mounting a rearguard action in ones that have been lost," he said.

Although liberals have long been concerned that a third Trump justice would result in a conservative lean on the bench for decades to come, some court watchers cautioned that justices often act independently of the presidents who appoint them.

Justice Neil Gorsuch, a Trump pick, led a 6-3 opinion this year that upheld the rights of gay, lesbian, bisexual and transgender employees in the workplace. Chief Justice John Roberts, a George W. Bush appointee, has joined his liberal colleagues in rulings against Trump in major administrative law disputes.

The addition of a sixth conservative justice "could cut two ways," ClearView Energy Partners LLC wrote in a note to clients last night.

"On one hand, the additional vote … could add to a layer of ‘pendulum proofing’ to protect against a Biden-driven polarity shift," the consulting firm wrote. "For example, a Biden Administration could find it harder to demonstrate that it had a ‘reasoned explanation’ for rewriting final, Trump-era rules."

On the other hand, the firm said, since conservative judges "tend to read laws as they were written," another Trump appointee could further motivate Democrats to eliminate the Senate filibuster and rewrite laws if they gain a majority in the Senate.

In addition to Gorsuch, Trump has also installed Kavanaugh on the bench.

Senate Majority Leader Mitch McConnell (R-Ky.) has already pledged that the Senate will vote on Trump’s nominee to replace Ginsburg — despite the justice’s dying wish, relayed by her granddaughter Clara Spera to NPR, that she "not be replaced until a new president is installed" (see related story).

Trump this month added to his list of people he would select from if another vacancy opened on the court while he was still in the White House. Democratic presidential nominee Joe Biden has faced pressure to also provide a list of potential justices.

"Let me be clear," Biden wrote in a tweet last night. "The voters should pick a President, and that President should select a successor to Justice Ginsburg."

Court watchers said Ginsburg’s death creates a hole on the bench on environmental issues that will influence what cases the court decides to hear and how they decide them.

Jonathan Adler, director of the environmental law center at Case Western Reserve University, said the remaining justices largely don’t embrace the environmental aspects — and impacts — of cases before the court.

"There’s no environmental voice on the court right now," he said. "It’s possible her replacement could be, but that would depend on who replaces her."