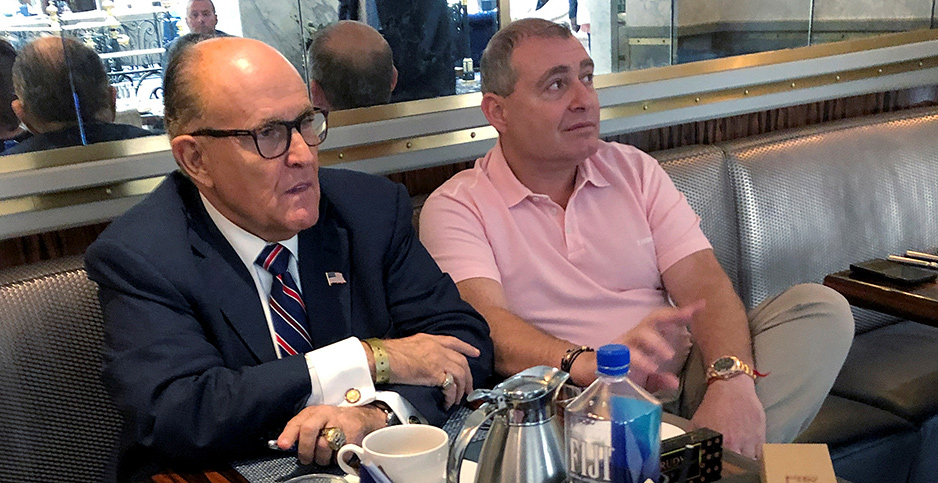 An energy executive who acted as a fixer in Ukraine for Rudy Giuliani has been arrested on charges of making illegal campaign donations to a political action committee supporting President Trump.

Lev Parnas and a business associate, Igor Fruman, were arrested last night and charged with making illegal campaign donations. Parnas, a Ukrainian American businessman who helped Giuliani, was scheduled to give a deposition this week to the House committee conducting an impeachment inquiry into Trump.

"The defendants concealed the scheme from the candidates, campaigns, federal regulators, and the public by entering into secret agreements, laundering foreign money through bank accounts in the names of limited liability corporations, and through the use of straw donors," the indictment states.

In May 2018, Parnas and Fruman made a $325,000 donation to America First Action, a super political action committee supporting Trump. The donation came from Global Energy Producers LLC, a liquefied natural gas company founded by Parnas. The donation came about a month after the company was founded.

The indictment was handed down by the U.S. attorney for the Southern District of New York. Giuliani, who served in that position until 1989 and was elected mayor of New York City in 1994, has not been accused of participating in the scheme.

Parnas helped Giuliani make key connections in Ukraine as the former mayor sought to investigate a conspiracy theory that Democratic presidential candidate Joe Biden had pressured Ukraine to fire a prosecutor investigating an energy company that had hired Biden’s son Hunter to its board. Parnas acted as a go-between for Giuliani by introducing him to Viktor Shokin, the former prosecutor whom Biden publicly criticized for failing to address corruption. Parnas also accompanied Giuliani to a July meeting with Kurt Volker, the former U.S. special envoy to Ukraine, and discussed pressuring Ukrainian officials to investigate Biden, according to Volker’s testimony last week before lawmakers engaged in the Trump impeachment inquiry.

Parnas and Fruman also touted connections to Trump and Giuliani as they sought to replace board members of Ukraine’s state gas company, Naftogaz, the Associated Press reported. The two man sought to steer lucrative contracts to Trump allies, according to AP. Energy Secretary Rick Perry has also pushed for changes to the board at Naftogaz.

The indictment also lays out connections Parnas and Fruman made in Republican politics through further alleged illegal donations. Both men have donated to former Rep. Pete Sessions (R-Texas). The indictment also states that Parnas and Fruman made illegal donations to "Congressman-1," adding that Parnas met with Congressman-1 and sought "assistance in causing the U.S. Government to remove or recall the then-U.S. Ambassador to Ukraine." The request from Parnas came on behalf of at least one Ukrainian government official, the indictment states.

Marie Yovanovitch, the former U.S. ambassador to Ukraine, was recalled by the Trump administration in May after conservative media outlets attacked her for not being loyal enough to Trump. She is scheduled to testify before the impeachment inquiry tomorrow.

In addition to the alleged straw donations, Parnas and Fruman were among a group that sought to form a recreational marijuana company in Nevada and obscured foreign donations to a candidate for a state office with a goal of seeking favorable policy, the indictment states.

"Your clients are private citizens who are not employees of the Executive Branch," the lawmakers wrote to an attorney for the men. "They may not evade requests from Congress for documents and information necessary to conduct our inquiry. They are required by law to comply with the enclosed subpoenas. They are not exempted from this requirement merely because they happen to work with Mr. Giuliani, and they may not defy congressional subpoenas merely because President Trump has chosen the path of denial, defiance, and obstruction."