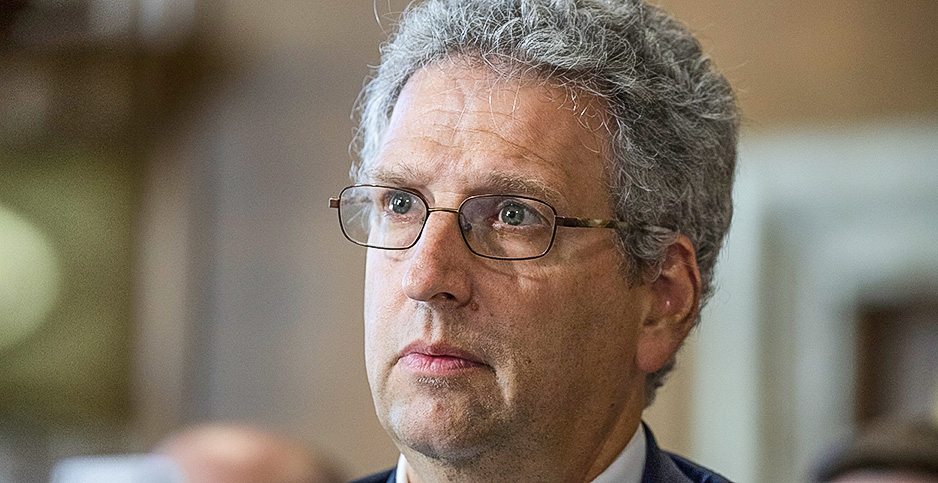 Since taking the helm at the Federal Energy Regulatory Commission in January, Chairman Richard Glick has steered the independent agency toward addressing climate change in its decisions.

Despite criticism from energy companies and some fellow commissioners, Glick, a Democrat, told E&E News he thinks the climate-aware approach could actually be good for natural gas interests.

"I think it’s better for everybody," Glick said. "I’ve tried to explain this to the pipeline companies: There are ways of moving forward with these orders that are more legally sustainable."

By taking a closer look at proposals’ potential emissions before approving projects, FERC could leave pipelines and other projects less vulnerable to legal challenges, he said.

It’s not the only issue Glick aims to address differently than previous leaders of FERC, which oversees wholesale power markets and large-scale infrastructure projects such as interstate gas pipelines. With the Biden administration calling for rapid emissions reductions and 100% carbon-free electricity by 2035, FERC’s actions over the next year could make or break some of those goals.

Glick is also seeking to make it easier to build new high-voltage transmission lines that can transport renewable energy across the country — without increasing costs for ratepayers — and to establish new rules for the commission. A FERC meeting last Thursday turned combative when Commissioner James Danly, a Republican, proposed adding an eleventh-hour amendment to two orders, something Glick said hasn’t been done "in at least 14 years" (Energywire, May 21). Danly defended the move as appropriate, but Glick said he hopes to prevent similar last-minute changes in the future.

In an interview Friday, Glick also weighed in on his agency’s climate responsibilities under the bedrock National Environmental Policy Act, lamented the limitations of remote work and doubled down on his interest in setting enforceable cybersecurity rules for pipelines:

You’ve stressed the need for cybersecurity requirements for pipelines, particularly in light of the Colonial pipeline ransomware attack [that disrupted East Coast fuel supplies earlier this month]. Why do you feel that cybersecurity standards need to be mandated?

Our pipeline system, whether it be on the natural gas side or liquid fuels, is extremely important. We see what happens when a significant pipeline goes down, even for a few days. We need to do a much better job to ensure the security of these facilities.

I also think we need to take a look at whether there should be mandatory reliability standards. We saw in Texas this past winter that there’s such a connection between the electric sector and natural gas pipeline sector. When pipelines fail, sometimes the electric generation fails. We already have a mandatory standards approach to reliability to the bulk power system. I think we need to consider whether to bring that over to natural gas pipelines, as well.

You have been aggressive about FERC playing a role in climate change and addressing greenhouse gas emissions. What pushback are you facing?

In my interpretation of the law in both NEPA and the Natural Gas Act, we’re required to consider significant environmental impacts. How could you not say climate change is one of the most significant environmental threats of our time? The courts have told us that. The [U.S. Court of Appeals for the District of Columbia Circuit] has twice told us we need to do a much better job of making an inquiry into climate change issues.

Some of my colleagues have tried to ignore that, and I think that’s dangerous for several reasons. It violates the law, and even more importantly, these orders could get sent back to FERC because we’re not doing our job. I know different people have different views on this, but I feel like we have to get past this. I commend [Republican] Commissioner [Neil] Chatterjee, who said at the meeting the other day that things have changed. He may have even lost his chairmanship because he had the audacity to say climate change is a real phenomenon. I’m hoping our other colleagues come along, as well.

During the most recent FERC meeting, Commissioner Danly introduced an amendment stating that the commission’s consideration of greenhouse gas emissions in two natural gas pipeline projects would be "for information purposes only." You called the addition of the amendment "deceptive." What got you so ticked off about that?

Back in the ’90s, there was a give-and-take process sometimes, where they’d go to a commission meeting and commissioners would say, ‘How about making this change?’ That system has gone by the wayside. As I understand it, it’s been at least 14 years since anybody offered an amendment at the commission meeting. I think it’s good common sense and common decency to have these discussions before the meetings.

Commissioner Danly didn’t do that. He chose to wait for the commission meeting and didn’t tell any of us. He sent an email after he’d already introduced it verbally, and I didn’t even have it for a while, so I couldn’t take a look. I used the word "deceptive," and I thought it was. If we can’t work out our differences, people should be more than free to speak against a particular proposal or write a dissent on it. But blindsiding everybody was not appropriate.

I’m going to double down as chairman and make sure we have a better approach. That also includes establishing a set of rules. It turns out, the commission has never had any rules about the processes if you want to offer an amendment. I think that’s something we need to take a look at.

You’ve spoken about how you want to pursue transmission reform. What issues do you want the commission to look at?

We need to improve the transmission planning process so that we actually plan for what’s needed. If we know a certain area is very windy or has good solar resources, and we know there’s going to be generation built in that area, how do we plan for transmission to be able to access generation?

The second area to look at is cost allocation. We have a judicial requirement to allocate the cost of transmission roughly commensurate with the benefits. How do we define benefits and beneficiaries? It’s easy if you think of just the power going across the line. But transmission creates all sorts of other beneficiaries, whether it’s increased reliability, reducing congestion, being able to access cheaper electricity elsewhere, and certainly being able to meet state and federal clean energy targets.

The third area is on transmission interconnection. A lot of interconnection queues are clogged right now. We need to figure out a way to expedite those processes.

The fourth area is cost containment. People realize there are a lot of investments needed in transmission, but I think we’ll have more faith in the process if we also know we’re going to make sure transmission investments are made efficiently and costs aren’t run up. That’s going to require additional commission oversight, and that’s just as important as everything we’re doing on transmission.

The commission has been reviewing its approval process for natural gas pipelines. What changes would you like to see?

There are several issues that I think are worth pursuing. One of them is need. We are required under statute to determine whether a pipeline is necessary or not. FERC has been completely relying on the existence of precedent agreements between shippers and pipeline developers to determine whether there’s a need. In some cases, that might make sense, but it doesn’t make sense when the precedent agreements are between affiliates.

Secondly, climate change. We’ve had significant disagreement among commissioners, and the courts have told us to do something that the commission hasn’t been doing in the past, which is to actually make climate assessments. My hope is that we’ll be able to come to a better approach to examining greenhouse gas emissions.

Third, we should provide a better opportunity for folks to be heard. The Algonquin Gas compressor station case is a good example. If the commission had, earlier on, actually taken into account the concerns of folks in that area [in Weymouth, Mass.], there would’ve been a different result. The compressor station could’ve been located in a different area. I don’t want to second-guess people who made decisions before I got here, but the decisionmaking process wasn’t helped by the fact that some voices weren’t heard. Whether it be through the Office of Public Participation or the Office of Environmental Justice, I think we’ll have a better decisionmaking process that will work better for everybody.

Have you had any favorite moments so far as chairman?

I’m looking forward to that favorite moment where we actually get back in person. Whether we do our meetings by phone or video, it’s difficult for all of us and hard to get the feedback from colleagues, staff and people in the audience.

You have about a year left in your term as chairman. Do you want to stay on past that?

You’re the first person who’s ever asked me that. It’s not up to me, but I really enjoy my job. We’re in the midst of a very significant transformation in the energy sector, and it’s great to work on those issues.