Global CO2 emissions are flat, but it’s not all good news 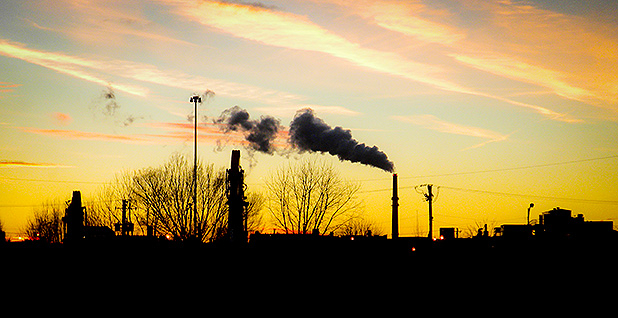 The sun sets over the Fisk Generating Station in Chicago. Global energy-related carbon dioxide emissions were flat for a third straight year in 2016 even as the global economy grew, according to the International Energy Agency. Photo by Vxla, courtesy of Flickr

For the third year in a row, the carbon dioxide emissions that drive climate change worldwide have been level.

The emissions pause is particularly noteworthy because it comes despite a growing global economy, the International Energy Agency announced. That’s a sign that carbon emissions are "decoupling" from the economy as other sources of energy come online.

Researchers measured 32.1 metric gigatons of CO2 emissions in 2016, the same as in the previous two years. That’s even as the global economy grew 3.1 percent. The stagnation, according to IEA, is due to the growth of renewable energy, more switching from coal to natural gas, improved energy efficiency programs, and additional nuclear facilities coming online.

"These three years of flat emissions in a growing global economy signal an emerging trend and that is certainly a cause for optimism, even if it is too soon to say that global emissions have definitely peaked," Birol said in a statement. "They are also a sign that market dynamics and technological improvements matter."

What’s more, there is tremendous potential for natural gas in both China and India, according to the IEA. Natural gas accounts for about a quarter of the world’s energy supply, but in China it’s just 6 percent and in India just 5 percent.

Three years without emissions growth is notable, but it needs to be turned into a decline, said Glen Peters, a senior researcher at the Center for International Climate and Environmental Research-Oslo in Norway. He said the ultimate goal is to get to zero, and there’s only about 50 years left to hit that target.

"It’s a meaningful first start, some baby steps; we’re starting to turn around and look at walking in the right direction," he said. "If emissions are going to go down, they’ve got to go flat first, so this is the first step, so the important thing is to make sure they don’t start rising again. The next thing is to concentrate on making sure they go downwards."

The amount of carbon emissions, largely produced by humanity’s consumption of fossil fuels, is steadily warming the planet. Limiting that carbon is the only way to stem the worst effects of climate change, according to mainstream climate science.

Even if the world’s biggest economies were to take significant action to lower carbon emissions, it might be too late, researchers have repeatedly said. The pause in emissions growth is positive for air pollution, the IEA said, but still not enough to keep global temperatures from rising 2 degrees Celsius.

Indeed, February 2017 was the second-hottest in 137 years of record keeping, only falling behind last year, the National Oceanic and Atmospheric Administration and NASA announced on Friday. The average global temperature was 1.76 degrees Fahrenheit above the 20th-century average of 53.9 F, according to NOAA. This winter overall is also the second-warmest on record, behind last year.

"It underscores how fast we’re moving towards a high-CO2 world and carbon dioxide is rising every year, but that’s not a statement that things are staying the same; it’s on the path toward a very different future," said Ralph Keeling, director of the Scripps CO2 Program and a greenhouse gas expert. "Just as we’re at essentially record fossil fuel burning, it’s no surprise that the CO2 rate is also achieving records year by year."