Global CO2 footprint to break another record in 2019 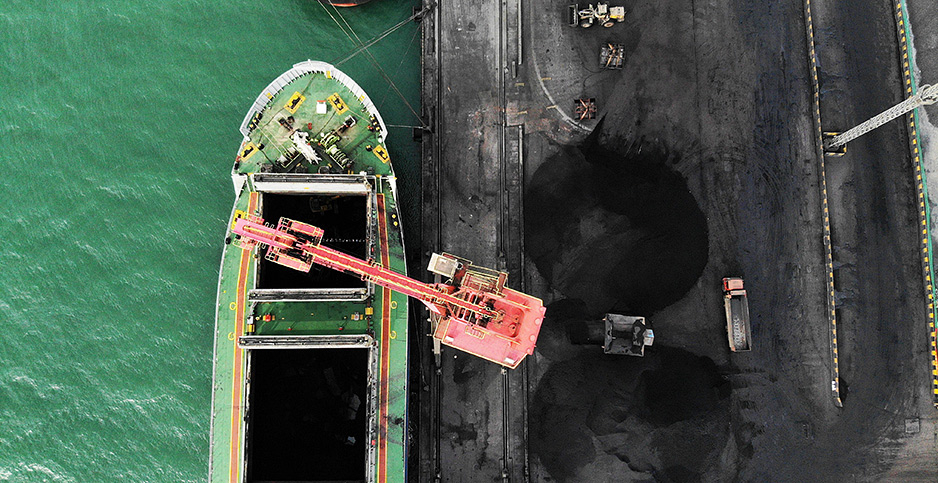 Global greenhouse gases continued to rise this year. A cargo ship is loaded with coal in China's Shandong province. Xinhua/Sipa/Newscom

Global carbon emissions are expected to hit an all-time high in 2019, scientists say, smashing a previous record set in 2018.

By the end of the year, emissions from industrial activities and the burning of fossil fuels will pump an estimated 36.8 billion metric tons of carbon dioxide into the atmosphere. And total carbon emissions from all human activities, including agriculture and land use, will likely cap off at about 43.1 billion tons.

The estimates were released last night in a new report from the Global Carbon Project, an international research consortium dedicated to tracking the world’s greenhouse gas emissions.

The findings — along with recommendations for reversing the growth in global carbon output — were presented in three separate papers published in various journals. They’ll also be shown today at this year’s United Nations climate talks in Madrid.

There is some good news. The authors expect a substantial slowdown in worldwide fossil fuels emissions for this year. Emissions from coal, oil and natural gas expanded by about 2% globally in 2018. For all of 2019, they predict an expansion of just 0.6%.

Part of the slowdown can be attributed to declines in coal use in the U.S. and much of Europe, and lower-than-expected growth from other key coal consumers this year.

The European Union will have registered coal emission declines along the same lines as the United States by year’s end, said Canadell, while India and China both showed strong increases, though less rapidly than in the past.

The Global Carbon Project’s estimate of a 0.6% increase in the world’s fossil fuel emissions for 2019 represents a "preliminary" estimate, he said, "but this is about a third of the growth rates we’ve seen of the previous years, so it is actually a quite significant slowdown."

Still, it’s too early to tell if the slowing will continue in the long term. Other recent short-term trends have sparked temporary optimism, only to quickly reverse themselves.

Between 2014 and 2016, global carbon emissions remained mostly flat, raising hopes the world’s carbon output may have peaked for good. But emissions began to rise again in 2017 and have continued growing through this year.

And with every year that emissions continue to rise, international climate goals outlined in the Paris Agreement become a little harder to reach. Just last week, a grim report from the U.N. Environment Programme warned that carbon dioxide emissions must fall by 25% over the next decade to keep the global temperatures within 2 degrees Celsius of their preindustrial levels (Climatewire, Nov. 26).

To reach a more ambitious target of 1.5 C, emissions would need to fall by 55%.

In a briefing yesterday to reporters, Canadell said his group agrees with recent conclusions drawn by the U.N. Environment Programme that industrial greenhouse gas concentrations in the atmosphere are still rising far too quickly for international efforts to succeed at limiting global warming to 1.5 C.

"The single most import result is that we have yet another year of growth in CO2 emissions coming from all human activities," Canadell said of his team’s research. "I think that it is very important to acknowledge at this moment that every single additional year of emissions growth makes it significantly harder to achieve the goals of the Paris Agreement."

As if to underscore this view, the World Meteorological Organization issued a "provisional statement" on 2019 climate and weather conditions meant to be seen by delegates gathered in Madrid for the latest negotiations around the U.N. Framework Convention on Climate Change.

WMO says that its data indicates that average global temperatures for 2019 were about 1.1 C above those compared with the preindustrial age. University of Tasmania professor Pete Strutton said that WMO data proving high concentrations of anthropogenic greenhouse gas emissions in the atmosphere shows that drastic cuts in CO2 output will no longer be enough to prevent warming by 3 C.

"There is no way for Earth to stay below 3 C without large-scale emissions capture and storage, in addition to massive emissions reduction," said Strutton. "Governments and individuals need to act swiftly."

Natural gas in the spotlight

Despite the Trump administration’s emphasis on coal, and its rollback of various environmental regulations over the past three years, U.S. emissions have continued to fall. This year they declined by about 1.7%, the report finds, and have decreased by an average of about 1% each year for the last 15 years.

That’s largely the product of declining coal use. Still, those reductions were partially offset by continued increases in natural gas consumption.

That’s not just a U.S. trend. Natural gas has been the dominant driver of global carbon dioxide emissions since 2012, the report notes, despite being less carbon intensive than both coal and oil.

"Now that we have got movement on coal, particularly in some countries, we also need to get movement on oil and natural gas," Glen Peters, research director at the Center for International Climate Research in Norway and a co-author of the new report, said in an email to E&E News while in transit to the conference in Madrid. "It is a little worrying that natural gas is growing relatively fast, and even accelerating."

The expansion of relatively cheap natural gas is responsible, in large part, for continuing coal declines in the U.S. and Europe. Some experts have suggested the fuel, which is less carbon intensive than coal, may serve as a bridge to clean energy, helping facilitate a transition to zero-carbon renewables like solar and wind.

But for that to happen, renewables must begin to replace fossil fuels, not just add more power sources, said Rob Jackson, a Stanford University scientist and another Global Carbon Project contributor.

"The two places where renewables and natural gas are both displacing coal are here in the United States and in Europe," he told E&E News. But elsewhere around the world, he said, "most of the new gas being burned isn’t replacing coal — it’s providing new energy for people."

Continuing increases in coal consumption across much of Asia, particularly in China and India, remain a primary challenge for global climate action.

"There is a lot to do to get coal out of the system in countries where the coal fleet is young," Peters noted. "But simply replacing coal with gas is going to lock in continued emissions as well, so we can’t turn a blind eye to natural gas."

Authors of the new assessment note that a large-scale overhaul of global energy and transportation systems remains necessary to reduce global emissions at the rate required to keep global climate goals on track.

He noted that he’s optimistic about changes in the electricity sector and the continued growth of renewable energy, but added that expansions in the use of electric vehicles and carbon capture and storage technology needed more focus.

"Despite slower emissions growth around the world, we still set another record for carbon dioxide pollution," he said. "And it’s hard to be happy about that."