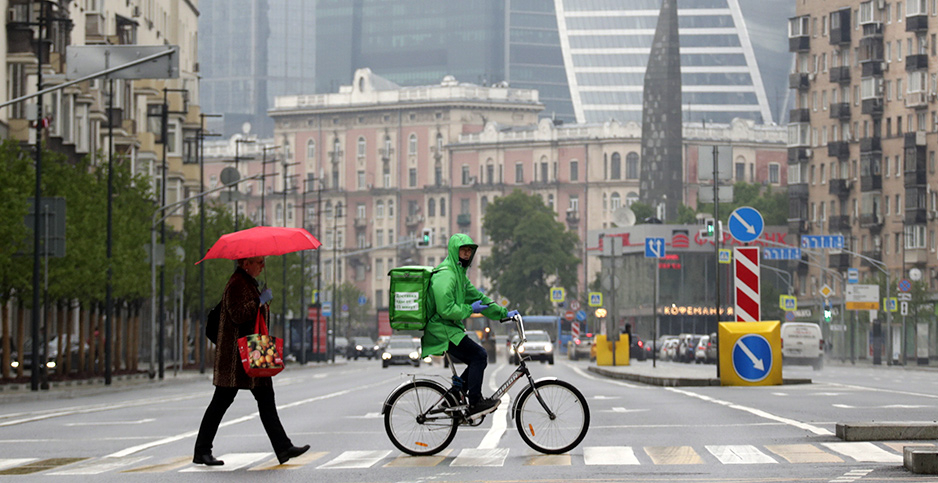 Global emissions might have peaked last year in part because of the coronavirus pandemic. Cars have largely disappeared from streets in Moscow. Mikhail Metzel/TASS/Newscom

Climate researchers increasingly believe 2019 may represent the world’s peak output of carbon dioxide, with a combination of the coronavirus pandemic and a rapid expansion of renewable energy putting a cap on emissions years earlier than expected.

The milestone would signal a significant shift for the planet, ending decades of runaway emissions growth and signaling the beginning of a new chapter where CO2 levels start to fall.

"It really shows us how close we are to turning this corner," said Kim Cobb, a professor of earth and atmospheric science at Georgia Tech and the director of the Global Change Program.

Scientists nevertheless cautioned against celebrating the landmark’s arrival. Carbon dioxide can exist in the atmosphere for hundreds of years, and its current level of concentration is at the highest point in human history.

Peak emissions would signal the beginning of a long and difficult road toward pushing CO2 output to zero. Researchers also stressed that it’s unknown whether the world has actually reached the zenith of emissions being released through human activity. Aggressive efforts to address the economic wreckage of the pandemic could jump-start a fresh wave of emissions, experts said.

"We’ve stopped turning up the faucet pouring into the bathtub, but the faucet is still on and the water is still overflowing and causing damage all over the floor," said Jonathan Foley, a climate scientist who is the director of Project Drawdown, a nonprofit dedicated to reducing emissions. "We’ve stopped making things worse, which is the first step to making them better, but we’ve got a long way to go."

Emissions have been rising since the Industrial Revolution. But the rate of emissions growth had slowed in recent years, thanks in part to efficiency improvements and the adoption of renewables.

Zeke Hausfather, director of energy and climate at the Breakthrough Institute, reckons that global emissions would have peaked in 2024 without the coronavirus. That timeline might be shortened by the pandemic, which has caused massive shifts in transportation and economic output.

"The most important thing isn’t so much whether or not we peak in 2024, 2019 or even 2028. It’s that the world appears increasingly likely to be on track for a long plateau in emissions over the next decade," Hausfather said.

Earth is on pace to experience a rise in global temperatures of 3 degrees Celsius, he said.

That’s an improvement from a decade ago, when most projections estimated temperatures would rise more than 4 C. But it remains a far cry from limiting the global spike in temperatures to 2 C, a threshold that scientists believe would avert many of the worst impacts to the planet.

"I think we should celebrate the fact that the really catastrophic scenarios that we thought were likely a decade ago seem a lot less likely today. We have made more progress as a society in making clean energy cheap and deploying it at large scales," Hausfather said.

"At the same time, we need to be cognizant that the world we’re on track for is still a catastrophic world for many — for the natural world, for many poor countries with less adaptive capacity," he added. "You know, a 3 C world, which we seem to be on track for now, is not all sunshine and roses."

David Lea, a professor of earth science at the University of California, Santa Barbara, agreed that it’s increasingly likely the peak has arrived. Only a large wave of unforeseen emissions could counteract the reductions experienced during the pandemic, he said. That runs against decarbonization patterns.

The point at which global emissions plateau is important, he said. The sooner that happens, the easier it will be for the world to emit no CO2 at all.

"If we peaked in 2000, we would have been at about 25 gigatons per year. If we peak now, we’re going to be at 37 gigatons," Lea said. "If the ultimate goal is zero, you want to peak at the lowest possible point."

The coronavirus has pushed the world’s emissions output down at unprecedented levels. A recent paper in Nature Climate Change estimates CO2 levels fell 17% at the height of the pandemic in early April (Climatewire, May 20). The study estimates emissions could fall 7% in 2020, though that figure could range from 2% to 13% depending on how the economy recovers from the virus.

Even a 2% cut would represent a reduction of historic proportions. Global CO2 output fell roughly 1% as a result of the financial crisis in 2009. The question now is whether emissions will rebound as they did in 2010, when global stimulus efforts pushed CO2 levels up 5%.

The world’s emissions trajectory depends again in large part on how the economy rebounds from a crisis. But many researchers are increasingly confident it could be different this time, thanks to the growth of renewable energy.

The wind and solar industries have weathered the worldwide economic lockdown better than their counterparts because they have no fuel costs. That means grid operators still dispatch renewable energy even though electricity demand has fallen.

A recent report by the International Energy Agency estimated that demand for coal will fall 9% this year, while demand for renewables will increase slightly.

"While I think we’ve hit peak emissions, I think renewables are in a strong and precarious spot at the same time," said Daniel Kammen, a professor who studies power systems at the University of California, Berkeley.

On one hand, costs of wind and solar projects have fallen to the point where they consistently beat out fossil fuel competitors. At the same time, government subsidies for fossil fuels are extensive, meaning demand for fuels like coal, oil and gas could bounce back with government support.

What governments do next will shape the economic recovery, Kammen said.

China, which drove the growth in global emissions during the Great Recession, is installing renewables at a rapid clip and seeing an increase in electric vehicle use, he said.

The question for China, the world’s largest emitter, is whether it will continue exporting fossil fuels and the technologies that burn them under its Belt and Road Initiative, which aims to strengthen Beijing’s economic ties in Asia, Europe and Africa.

In the United States, much hinges on the outcome of this fall’s presidential election. A win by former Vice President Joe Biden (D) could usher in a response that reflects the last recovery, when the Obama administration included subsidies for clean energy as part of its stimulus package.

If President Trump wins, it would likely mean more support for fossil fuels.

"If China would commit to greening the Belt and Road, that would make a huge difference," Kammen said. "If the U.S. elects Biden and his climate plan is good, and China makes that switch, then there is no question emissions have peaked."

Europe has signaled that it intends to make green investments a large part of its recovery. But fossil fuel infrastructure is expanding in India, China and Japan, among other nations, said Cobb, the Georgia Tech professor.

Emissions from those projects will be locked in for decades to come.

So the trajectory of global CO2 could be determined by how much the world devotes to clean energy versus fossil fuels in response to the economic crisis from COVID-19, she said.

"It is going to be a close race. It means by tweaking a couple knobs, we could tip the balance," Cobb said. "I really hope this is a defining moment in terms of these large-scale investments in infrastructure that will determine our emissions trajectories for the next decades."