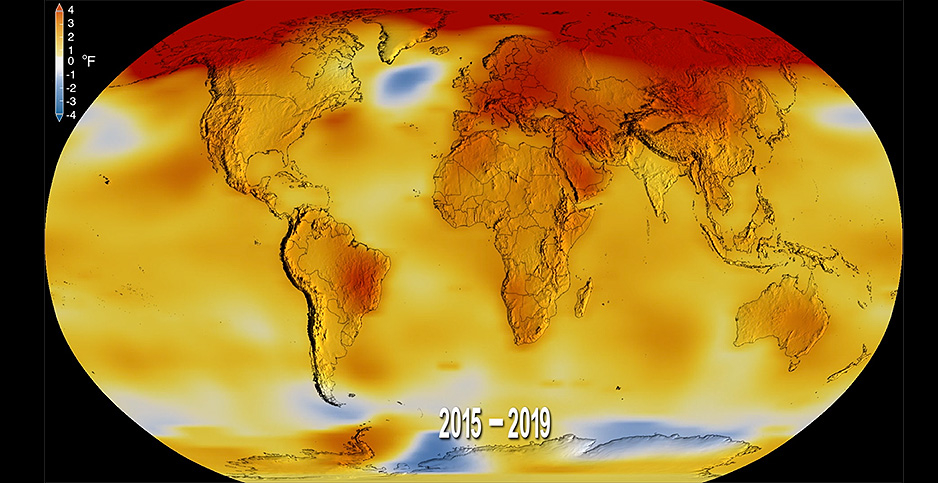 Global temperatures were second highest on record between January and June. This NASA illustration shows how much temperatures have increased since the late 19th century. NASA

Global temperatures for the first half of 2020 nearly broke a 141-year record that was set in 2016, according to newly released NOAA data that shows the planet getting steadily warmer since the 1970s.

The average land and ocean temperature for the first six months of this year was 1.07 degrees Celsius above the 20th-century average for January through June, NOAA reported. The 2020 temperatures fell just short of the January-June record set four years ago when global temperatures were 1.12 C above average.

The six hottest January-to-June periods on record have occurred in the past six years, NOAA figures show.

NOAA scientists say 2020 is very likely to rank among the five warmest years on record and could eclipse the calendar year record set in 2016 — or surpass the near-record set last year, which was the second-hottest since at least 1880.

Numerous climate anomalies occurred in the first half of 2020 including the temperature of 100.4 degrees Fahrenheit recorded last month in the tiny Siberian town of Verkhoyansk, one of the coldest inhabited places on Earth.

In the United States, there have already been six named tropical storms this year — more than there have ever been at this point in a year. Tropical Storm Fay caused minor flooding in New York and New Jersey last weekend.

Many parts of the world had record-high average temperatures in the first half of 2020, including Eastern Europe and northern Asia, where temperatures were at least 2 C over the 20th-century average.

The warming was less pronounced in the United States. The average January-June temperature was the eighth-warmest since domestic record keeping began in 1895.

There were 10 "billion-dollar storms" in the first six months of 2020 — storms that caused at least $1 billion in damage individually and resulted in a total of 80 deaths.

Temperatures were particularly high in the southeastern U.S. and set a January-June record in Florida, where almost all of the state’s 67 counties had record-high temperatures.

None of the roughly 3,200 counties in the U.S. had below-average temperatures in the first half of 2020, and just 16 counties had temperatures that were near-average.

The record heat in Florida came as the number of COVID-19 infections has soared in the state, which now has more cases than every state except for California.

The combination of heat and the pandemic is dangerous, said Juan Declet-Barreto, a climate specialist at the Union of Concerned Scientists.

"To cope with heat waves, people flock to cool refuges like movie theaters, malls and public pools, some of the very settings that are seen as higher risk for virus transmission. In other words, amidst the COVID-19 pandemic, efforts to keep cool could turn a heat wave into a super-spreading event," Declet-Barreto wrote in a recent blog post.

The warmth this year has left much of the U.S. in drought conditions, particularly in the West and Southwest.