‘Global Shield’: A climate fix or a distraction? 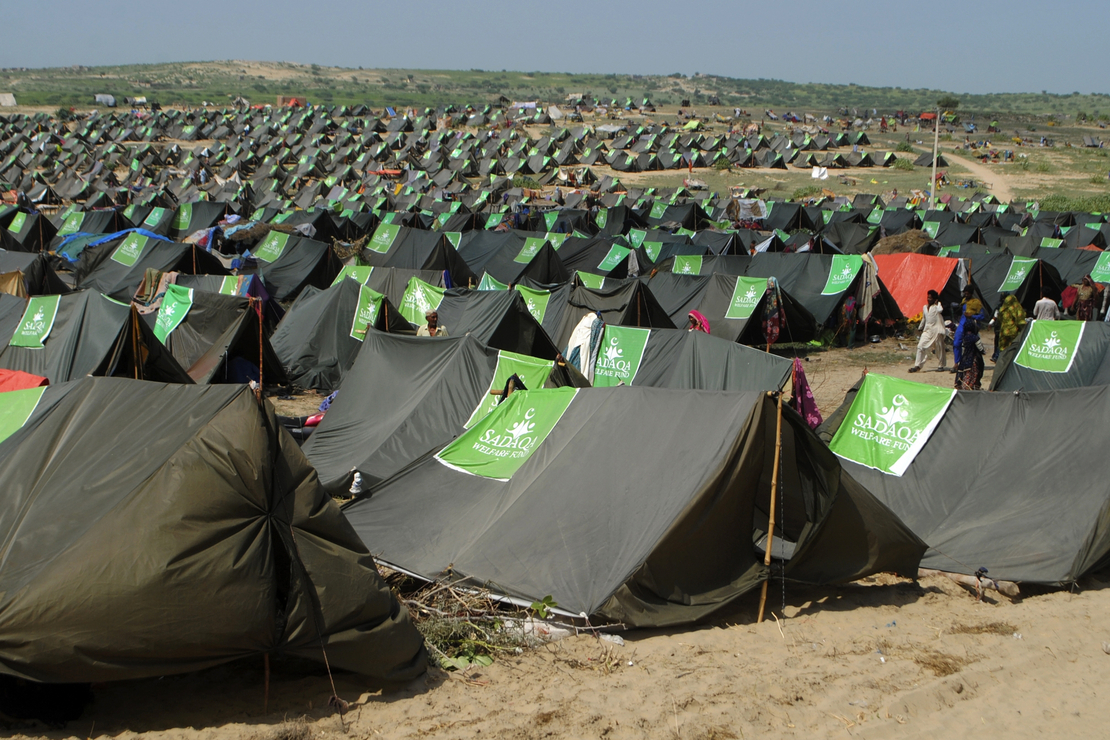 People from flood-affected areas walk between tents in a relief camp in Chachro, Pakistan, in September. AP

SHARM EL-SHEIKH, Egypt — The Global Shield might be one answer to helping peril-prone nations defend themselves against the rising dangers of climate change.

The insurance program is meant to shore up the climate resilience of poorer nations through tailor-made policies against the risks of rising seas, storm damage and crop failure. It was introduced at the international climate conference Monday.

“The Global Shield is long overdue,” said Ken Ofori-Atta, Ghana’s finance minister and the chair of the group of vulnerable country finance leaders known as the V-20.

The initiative, led by Germany in partnership with the G-7 and a group of the world’s most climate-vulnerable nations, is an attempt to help poor countries by offering them prearranged money that can be accessed quickly when climate-fueled disasters strike.

It comes as countries face tensions over compensating the world’s most vulnerable people for climate impacts that are being caused by greenhouse gases from the richest nations. That concept is known as loss and damage at these climate talks. Global Shield is a small program compared to the overall dangers — and costs — facing developing countries. But it’s seen as a step forward by some people on the front lines.

“It has never been a question of who pays for loss and damage because we in the V-20 are already paying for it,” Ofori-Atta said. “Our economies pay for it in lost growth prospects, our enterprises pay for it in business disruptions, and our communities pay for it in livelihoods and lives lost.”

The sharpening impacts of climate change have inflated the cost of capital for disaster-prone countries. That can drive up their debt burdens as they borrow more and more money to respond to extreme weather, often leaving them with no money to harden their defenses for future events. The 55 countries in the climate-vulnerable forum have lost $525 billion in the past two decades due to climate change, according to a recent report by the V20.

The Global Shield aims to offer funding packages to countries based on their individual needs. Those could include livestock and crop insurance, property insurance, credit guarantees, social protection systems, and support for other measures to ensure money is available when it’s needed.

The first recipients of the Global Shield program include Bangladesh, Costa Rica, Fiji, Ghana, Pakistan, the Philippines and Senegal.

Germany is bankrolling the initiative with €170 million ($175 million). Contributions from France, Austria, Denmark and Ireland bring the pot to more than €200 million.

Officials from Germany and vulnerable countries acknowledged that it’s nowhere near the billions needed for climate disasters. Ofori-Atta of Ghana urged the world’s major polluters and economies gathering in Bali, Indonesia, this week, to make additional contributions.

By leaving nations at the mercy of climate catastrophe, “you could be triggering a global economic meltdown,” he said. The V20 warned earlier this year that its members could stop payments on a half-trillion dollars in debt if lenders don’t embark on reforms to the global financial architecture.

The launch of the Global Shield comes midway through the two-week climate conference here in Egypt. A priority for developing countries is to secure money for the growing threats they face from a warming planet, but countries remain divided on where that money should come from.

Developing nations, particularly low-lying ones that are most prone to extreme storms and rising seas, are pushing for a new type of funding that would compensate them for irreparable climate harms caused by nearly 200 years of emissions from richer countries.

The Global Shield isn’t that, Germany and its vulnerable country supporters say.

It’s about tailor-made insurance packages to limit climate damages, said Svenja Schulze, Germany’s minister for economic cooperation and development. A steering committee composed of officials from developed and developing countries, the private sector and civil society will outline how it’s put into action.

Some vulnerable countries say the program could help them access funds quickly as they wait for negotiations here to produce a more lasting outcome — something that could take years.

While the U.S. has offered a more conciliatory tone about the idea of loss and damage, it remains resistant to any measure that could potentially open it up to endless claims for compensation or legal cases tied to its long-term climate pollution.

On Friday, U.S. climate envoy John Kerry said it was a “well-known fact” that the U.S. and many other countries will not establish some sort of legal structure that is tied to compensation or liability. “That’s just not happening,” he said.

Rather than back a fund, rich countries are offering a raft of alternatives, ranging from everything to carbon offset schemes to finance adaptation to insurance and early warning systems.

Some activists say the Global Shield is a distraction.

“It’s all voluntary, small bits of money,” said Rachel Cleetus, policy director with the climate and energy program at the Union of Concerned Scientists. And as climate impacts escalate and become more extreme, they will be uninsurable, she said.

“When you’re talking about sea-level rise gobbling up land, what are you insuring at that point?” she said.

“It is not a kind of tactic to avoid formal negotiations on loss and damage funding arrangements,” said Schulze, the German minister.

“We need a broad range of solutions and respective funding for tackling loss and damage, including for loss and damage for slow onset processes and noneconomic damages,” she added.

Harjeet Singh, head of global political strategy at Climate Action Network International, warned against hyping up Global Shield as a solution to address the increasing scale of floods, storms and droughts.

“It cannot take away attention from the primary demand of developing countries for establishing a finance facility for loss and damage at COP 27,” he said.