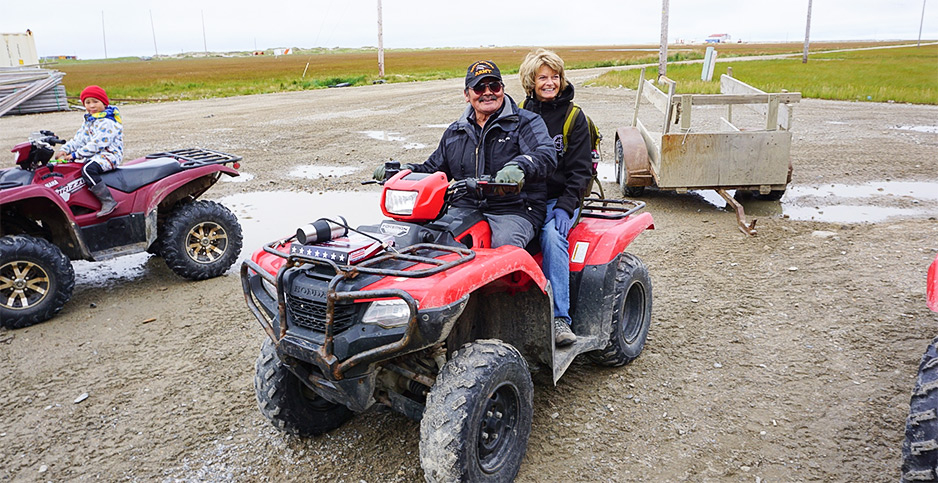 WALES, Alaska — The Arctic beach at this small Inupiaq village was so wide, when Frank Oxereok Jr. was a boy, large planes could easily land on it.

Four decades later, the Bering Sea has claimed about 90% of the beach that shields residents from the ferocious offshore storms that slam into this remote hamlet, which as the westernmost town on the U.S. mainland is about 56 miles from Russia.

"Now we can barely drive two four-wheelers side by side during high water," lamented Oxereok, the mayor of Wales, during a town meeting last month with Sen. Lisa Murkowski (R-Alaska).

The story of Wales’ shrinking beach is a familiar one throughout the Seward Peninsula, a sparsely populated tract of land that’s home to about a dozen coastal villages and the regional hub of Nome. Life here is being upended by the accelerated pace of climate change; Alaska is warming twice as fast as the rest of the world.

Coastal erosion and flooding, longstanding concerns of local residents, have been exacerbated as warming has left the Bering Sea largely devoid of sea ice that buffers coastal communities from storms.

Conditions are so bad in Shishmaref, which lies 70 miles to the northeast, that residents are trying to relocate the entire village (Climatewire, Sept. 4).

Wales, which backs up to higher ground, is not going to such extreme lengths. Instead, its residents are looking for money to build a sea wall lagoon to protect the village from the encroaching ocean. "Our storms used to be gale-force winds," Oxereok told Murkowski last month during her first visit to Wales. "Now we have hurricane-force winds."

Climate change is also compounding the endemic poverty found on the peninsula, which is home to some of the poorest people in the country. Low-income communities are considered some of the most vulnerable to climate change, and the threats are amplified for indigenous peoples who are dependent on the land, according to the Fourth National Climate Assessment.

In Wales, an estimated 70% to 80% of its 146 residents are unemployed, and only teachers and health care workers have access to running water.

"We still live in Third World situations here, and this is 2019 in the United States of America," said Oxereok, a U.S. military veteran.

Climate disruption in the Seward Peninsula was on display last month as E&E News accompanied Murkowski to the region to visit three Alaska Native villages that the senator had never been to. In each one, residents talked about the changes they’re witnessing and the threats to their livelihoods, safety and traditional lifestyles.

A key concern is the dwindling sea ice. It’s been shrinking for decades across the Arctic, and here in the Bering Sea, it was noticeably smaller during the past two winters (Climatewire, Sept. 5).

"The ice is so thin nowadays," said Oxereok. "Times have changed."

Unstable ice has disrupted travel throughout the region, requiring extra caution when traveling by boat and snow machine. The world-famous Iditarod dog sled race, which ends in Nome, has been rerouted in recent years, including this past winter, to avoid open water in the Bering Sea.

The 110 residents of Little Diomede Island, which sits just east of Russian waters in the Bering Strait and is visible from Wales on clear days, now depend on a helicopter that comes from Nome once a week to deliver supplies. Planes used to land on the frozen seawater, but it’s no longer safe enough.

In Wales, warmer winter temperatures have made it harder to land airplanes on the soft runway, at times cutting the village off from its only way of receiving supplies and evacuating sick residents. The town’s roads are often a muddy mess, prompting residents to use the beach as a shortcut when the tide is out.

That prompted village leaders to search for funding to improve the roads and landing strip. One man spent five days in Nome last December with his two grandsons, waiting for conditions to improve so they could return to Wales for Christmas. They got back to discover the road to town halfway underwater. "This was December," he said.

Similar stories abound on the peninsula.

In Teller, a low-lying Inupiaq village of 250 people about 55 miles southeast of Wales, residents say they need an evacuation road that can be used during severe flooding, which has gotten worse in recent years.

The village has already relocated its landing strip and landfill because of flooding. Now it’s moving the rest. The risk of inundation is so great that for years, new homes have been built at the "New Site," located almost 2 miles away on higher ground. The village has been split into two locations.

There’s a road that connects the village to Nome, 70 miles to the southeast, but it’s often impassable because of water and mud. Last winter, residents went weeks without coffee, sugar and tissues after the road washed out.

Also threatened by warming is the subsistence lifestyle that has nourished Alaska Natives for generations.

The dearth of sea ice makes it harder to conduct traditional hunts of whales and other marine mammals. In Wales, residents say they can’t afford boat motors. Conversely, when there is ice, hunters must venture farther out to sea to find prey, where they risk falling through the increasingly unstable ice.

Unusual weather patterns also limit the search for food, with hunters wary of venturing too far from the safety of the village.

"We used to hunt 12 hours a day when I was young," one village elder told Murkowski. "Now we go out a few hours because of the weather."

Unseasonable weather is altering the migration of game animals and the appearance of edible berries, which supplement diets. "Everything’s coming earlier," said one hunter, making it harder to judge the timing of hunts and finding the healthiest animals.

It’s a serious matter for Alaska Natives, given the costs of purchasing food that has to be flown in. In Wales, one resident talked about paying $12 for a 16-ounce can of peanut butter. "I’m worried that our little children aren’t eating as healthy as they ought to be," said a Wales elder.

Exorbitant prices are common throughout rural Alaska. In Brevig Mission, another Inupiaq village of almost 450 residents 6 miles up the coast from Teller, a frozen 2-pound slab of beef in the village store was priced at $45.

Seward Peninsula residents are also spooked by the declining numbers of animals they have seen in recent years, including geese and salmon. "I think the numbers are really going down," one man told Murkowski.

In recent years, a host of animals have borne signs of mysterious illnesses. In Wales, they’re scared to eat some fish that have been found with strange spots in their livers.

Oxereok, the mayor, recalled finding 13 seals that appeared starved to death near the village last year. Seals are commonly found to have diseased skin and internal organs.

"Something is happening out there," he said.

More and more stories were retold. In Brevig Mission, one man described finding luminous green salmon in the waters offshore. "We’re getting glowing salmon," he said as his young son slept in his lap.

While the causes remain a mystery, local residents offered an assortment of theories for the suspected environmental contamination: Russian military tests; the 2011 nuclear disaster at Fukushima, Japan; legacy contamination left behind by the U.S. military; oil and gas production; and plastic pollution.

"We’re really not too sure about the safety of our food right now due to everything that is being put in the water," one Brevig Mission resident told Murkowski.

Murkowski, who limits her own remarks during such visits to allow local residents as much time as possible to voice their concerns, urged villagers to record and share their observations.

"If you are seeing these strange, glowing fish, we need to know about it," she told the audience at Brevig Mission, explaining that data is what drives funding decisions in Washington, D.C. "We need the knowledge of those who live on the land and the water."

To that end, Murkowski has introduced legislation that would require indigenous representation on the Arctic Research Commission, an independent agency that advises the president and Congress on Arctic research (E&E Daily, Dec. 18, 2018).

"You are as significant an indicator and scientist, if you will," she told Brevig Mission residents. "You may not have a Ph.D., but you have a master’s degree in living" in the Arctic, she said.