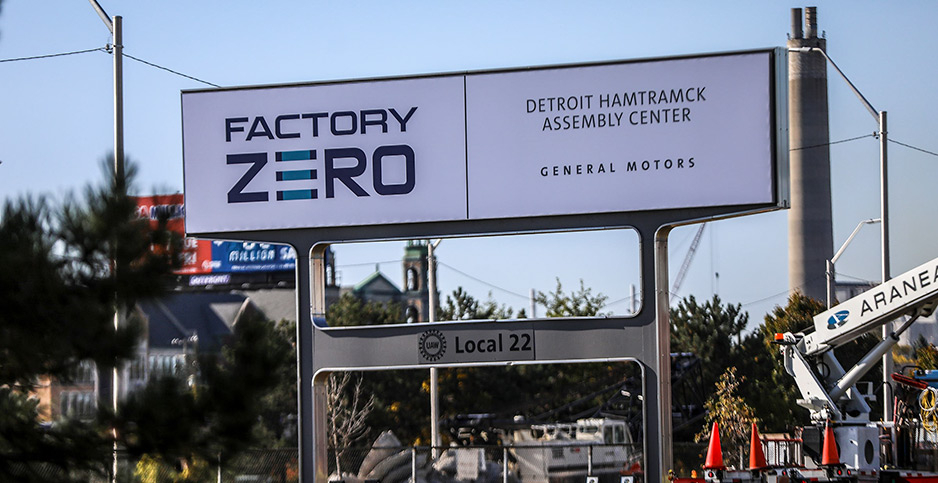 General Motors Co. said yesterday that it would build an electric version of the Chevrolet Silverado pickup truck. The vehicle will be manufactured at the "Factory Zero" plant in Detroit, which is also making other EVs. Kimberly P. Mitchell/TNS/Newscom

General Motors Co. said yesterday that it will create an electric version of its signature pickup truck, at an event that doubled as a promotion for President Biden’s infrastructure plan.

The announcement took place at a Detroit factory that is undergoing a $2.2 billion retooling to manufacture electric vehicles, including two versions of the Hummer, a self-driving van and now the electric Chevrolet Silverado.

GM President Mark Reuss said the truck will be built from the ground up to be electric and will have a range of more than 400 miles.

That would make it among the range leaders in a crowded field of electric newcomers with pickup trucks, including Tesla Inc., Lordstown Motors Corp. and Rivian. Ford Motor Co. is also planning an electric version of its bestselling F-150.

But GM also declined to offer key details — price, release date, specs or even pictures — which suggests would-be buyers might be in for a long wait.

The event was held in front of a crowd of employees at the cavernous, nearly 40-year-old Detroit-Hamtramck vehicle assembly plant. Last year, GM renamed the plant Factory Zero and committed it to making solely EVs. GM has said it will spend $27 billion companywide on manufacturing EVs by 2025 and will produce only EVs by 2035.

Speakers at the Silverado announcement included union and political heavyweights who connected the conversion of the factory and its future products to Biden’s infrastructure plan.

The plan was endorsed by Michigan Gov. Gretchen Whitmer (D) and former Democratic Gov. Jennifer Granholm, now Biden’s Energy secretary, who delivered a message by video for the GM event. Granholm is one of the Cabinet members tasked with selling the infrastructure plan to the public.

Sen. Debbie Stabenow (D-Mich.) also spoke, saying she would use her perch on the Senate Finance Committee to get the infrastructure plan "done so we can support what you’re doing [at GM] and create good-paying American jobs in Michigan."

A senior official from the United Auto Workers labor union also made clear that Biden has a staunch ally in the labor movement.

Terry Dittes, a UAW vice president who oversees the union’s relationship with GM, told the assembled workers at the plant that "we in the UAW couldn’t be happier" about the infrastructure plan.

The Silverado is important because it demonstrates that GM’s plans for EVs are extending from the fringes of its offerings to the core.

Until now, GM has focused its electrics on new vehicles, like the Chevy Bolt or the Cadillac Lyriq, or high-priced or exotic vehicles like the $80,000 Hummer SUV or the Origin, an autonomous van that is not yet street legal.

By contrast, the Silverado is GM’s top vehicle, with more than 586,000 units having been sold in the United States in 2020, according to Car and Driver. It is second only to Ford’s F-150.