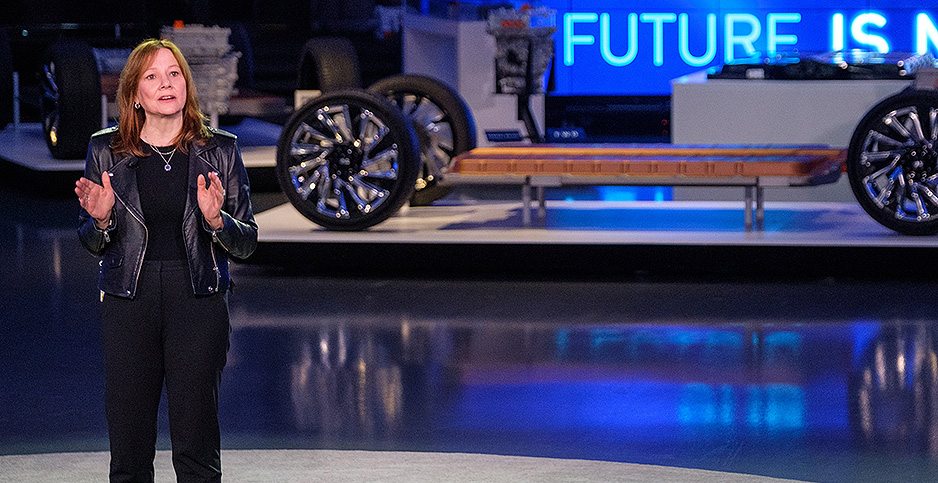 General Motors Co. launched a campaign yesterday to persuade the world that it really can become a full-spectrum maker of electric vehicles capable of competing with Tesla Inc. while also making money.

GM sought to convey its seriousness with a polished two-hour presentation for investors and media at its Design Dome in Warren, Mich., where the automaker unveiled a new battery technology platform called Ultium in addition to a series of other revelations.

It is a defining moment for GM, which was the first major automaker to go electric when it released the EV1 in 1996. But its efforts to make and sell EVs were never wholehearted because the profits relied on internal-combustion engines. Now, almost a quarter-century later, it is arguing that EVs will position it for growth.

"We will offer EVs from every brand, every segment, every body style, every price point and in every part of the country," said GM CEO Mary Barra, adding that EVs "will dramatically change the course of the industry, and this company."

A parade of executives showed off new GM technologies yesterday, including the Ultium platform that the company says will be more environmentally friendly and hasten the day when an EV’s cost will drop to that of a regular car’s.

GM also rolled out a new modular design platform that will drastically simplify the EV powertrain, or the chain of machines that convert energy into spinning wheels. GM President Mark Reuss said that while GM’s mostly internal-combustion vehicles now have 555 different powertrain configurations, its EVs will have just 19.

Also, the automaker showed off mock-ups of its new EV models that will be the first to market, including two versions of the GM Hummer, a new Cadillac SUV called Lyriq and a large sedan called Celestiq, and two new variations of the Chevy Bolt.

Barra said that the new EVs will be moneymakers soon after production begins and that the company will sell 1 million EVs a year by 2025 between North America and China.

She added that models would start to be available as soon as next year but also hedged those expectations, saying they would "be in our customers’ hands by 2025 at the very latest."

Barra said the company would spend $20 million by 2025 on its electric models. That sum far exceeds what most automakers are spending on the transition, though it falls short of some, including $91 billion by Volkswagen AG and $42 billion by Daimler AG, according to a tally by Reuters.

"GM has made a strong, serious commitment to EVs, certainly a stronger commitment to date than Ford, Fiat-Chrysler, Daimler, Hyundai, Toyota and Honda," said John Graham, a professor who studies autos and energy at Indiana University.

American drivers remain lukewarm to EVs because of the vehicles’ range and higher prices. And the customers who do want EVs these days overwhelmingly choose Teslas over GM’s Chevy Bolt. Investors feel the same way and have pushed Tesla’s stock to three times the value of GM, which is far larger and makes millions more cars than Tesla.

While they didn’t mention Tesla, the electric upstart was clearly on GM executives’ minds. Reuss said that GM’s new vehicles will have a top range of 400 miles, which would exceed any of Tesla’s current offerings.

That got the attention of some analysts. "GM given its vast distribution and global customer base must be taken seriously in this EV arms race," said Daniel Ives, an analyst for Wedbush Securities, in a note to investors.

However, he didn’t recommend purchasing GM’s stock, which rose only 50 cents on Tuesday on the New York Stock Exchange.

GM’s new battery system announced yesterday could have a profound impact on the design and cost of its future vehicles.

The Ultium system relies on pouch cells, which have a shape like file folders, and not the cylindrical cells that are in use by Tesla and most other electric models. GM will use that shape to make its batteries highly configurable depending on the type of vehicle and its power needs.

According to a presentation by Andy Oury, a GM battery-pack engineer, the cell’s form factor allows for stacking both vertically and horizontally, including double-stacking. The system is also designed to be able to convert to cylindrical cells, which are the dominant form in China, where GM has pinned many of its EV hopes.

The product is the result of a $2.3 billion joint venture with Korean battery maker LG Chem Ltd. The two will build a factory in Lordstown, Ohio.

That partnership will allow GM to tune the chemistry of the cells to the particular needs of the vehicle. It is also designed to enable future, more powerful batteries to be swapped into the car minus the need to make any other design changes.

GM is also angling for a different battery chemistry.

Right now, automakers are using three elements — nickel, manganese and cobalt, often shortened to NMC — to make a battery that is both affordable and as immune as possible to future supply problems (Energywire, Feb. 28).

General Motors is aiming to add aluminum to that mix to reduce the use of cobalt by 70%, Oury said, and possibly eliminate its use altogether.

Cobalt is especially troublesome for automakers because it is both expensive and sourced from few mines — including in a conflict zone in Congo — where labor conditions are often harrowing.

GM expressed confidence that the Ultium system will free the company to break the battery cost barrier of $100 per kilowatt-hour, a threshold at which experts think that EVs can be made as affordably as internal-combustion-engine vehicles. Current prices exceed $150 per kWh.

Oury said "we are nowhere near the bottom of the battery cost curve," adding that he thinks a battery range of 600 miles is achievable.

Reuss, GM’s president, was one to echo the point that affordability is a key goal.

"We have to be able to sell a vehicle like the Chevy Blazer, for example, where they are primary vehicles for people," Reuss said, "and not more expensive than the vehicles they replace."