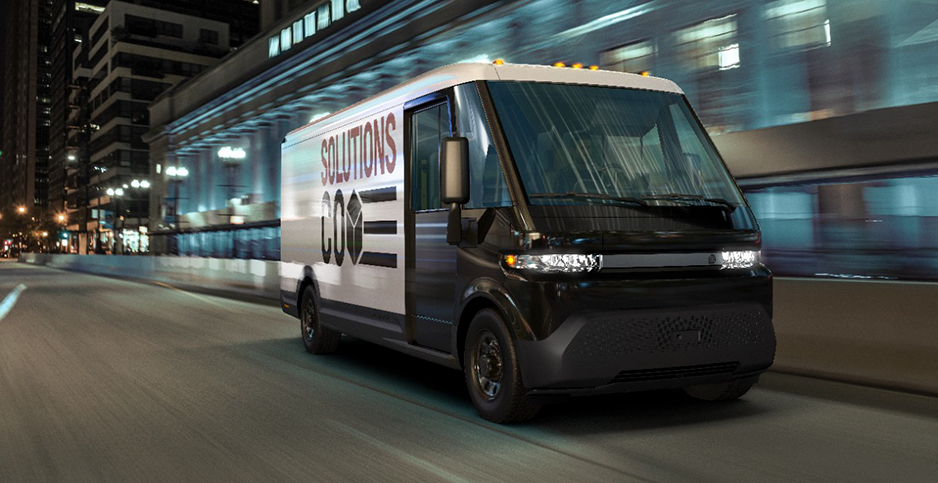 The next red-hot center of the electric vehicle market isn’t tough pickup trucks or sedans that go by at a blur. It’s big boxes that deliver boxes.

That became clear yesterday, when General Motors Co. CEO Mary Barra used her keynote address at a big consumer electronics show to unveil an electric delivery van, and a little sidekick that shuttles parcels from the curb.

The offerings are part of a new GM business unit called BrightDrop, which will launch America’s largest automaker into the realm of commercial logistics that most people associate with companies like FedEx Corp. and Amazon.com Inc. News of the venture sent GM’s stock soaring to record highs.

"We are building on our significant expertise in electrification, mobility applications, telematics and fleet management, with a new one-stop-shop solution for commercial customers to move goods in a better, more sustainable way," Barra said in a statement.

GM is joining a scrum of companies that see a huge opportunity in electric, medium-size trucks and vans — and the service dollars that come with them. Within the next year or so, startup Rivian will outfit delivery vehicles for e-commerce giant Amazon. The Transit, Ford Motor Co.’s bestselling van, will be electrified. Another up-and-comer, Workhorse Group Inc., last week announced it had received orders for 6,000 of its electric trucks that are assisted by drones.

Meanwhile, the stay-at-home pandemic world has juiced what was already a booming market for last-mile package delivery. The World Economic Forum estimated this week that urban last-mile delivery will grow 78% by 2030 — and lead to a 30% increase in carbon emissions if the vehicles aren’t electrified.

Electric vans are positioned to grab a lot of that growth (Energywire, Sept. 25, 2020).

Until now, GM had participated only modestly in the commercial van segment with gas-powered models like the GMC Savana. GM estimates the market for U.S. food, package and other last-mile delivery to be worth more than $850 billion within five years.

The opportunity goes well beyond selling the vehicle itself: Companies like Ford and now GM see a chance to lock customers into service contracts that bring new money streams and foster brand loyalty (Energywire, Nov. 13, 2020).

"They’re stepping a lot closer to offering you not just the vehicle but the tools," said Mike Ramsey, a mobility analyst for the consultancy Gartner.

Ramsey likened GM’s offering as an electric Trojan horse of sorts, bringing a bevy of related commercial products along with it. Basing its solution on a new electric platform allows GM to add something new to the crowded arena of telematics — the business of providing intelligence for fleet vehicles in term of routing, dispatching and repair.

"There is a white space for electric vans," he said.

The unveiling came at the Consumer Electronics Show (CES), a behemoth conference that is usually held in Las Vegas but is virtual this year because of the coronavirus pandemic.

The first, smallest delivery EV introduced by GM yesterday won’t be a road vehicle but rather a tall rectangular hauler for warehouses and curbs. Called the EP1, for "electric pallet," it is guided by hand and meant to match the speed of the person walking it.

The pod has a capacity of 200 pounds and carries 23 cubic feet of cargo behind locked doors. FedEx tried them out last year in a pilot in Vancouver, British Columbia, and found they made delivery more efficient.

It is a novel system that GM says it created in-house. "I don’t even know who the competition for that would be," Ramsey said.

The EP1 pallets are sized to fit into another, larger vehicle: the EV600, a light commercial van. FedEx is set to launch a pilot project using 500 vehicles later this year.

The EV600 will have a battery driving range up to 250 miles. That is significantly more than Ford’s electric Transit, which maxes out at 126 miles. The Transit is meant as a service vehicle for plumbers, florists and other vendors who don’t need to travel as far in a day as a parcel delivery van.

GM’s electric pallet is going into production early this year, and the van is due late in the year. The automaker has not revealed details of where the vehicle is being manufactured or how much it will cost.

Neither the vehicles nor the services is branded as GM, and they will instead carry the name BrightDrop.

"We’re bringing a new set of products/services to a new set of customers, in a new industry, so we created a whole new brand/business focused on solving challenges relating to the delivery of goods and services," a GM spokesperson wrote in an email.

BrightDrop is based in the San Francisco Bay Area and is led by Travis Katz, a veteran of several tech startups, alongside Rachel Kuhn and Brad Beauchamp, two executives from GM.

The van and its assistant

The Cadillac Celestiq, a high-end sedan with no release date, will have a digital screen running the length of the front seats. It will also have a glass roof with what GM calls "four quadrant suspended particle device smart glass," which allows each passenger to choose a custom level of transparency.

GM also said that later this year, its Chevrolet brand will bring a small crossover, the Bolt EUV, to showrooms.

Just before the electronics show, GM also debuted a new logo featuring an "m" that loosely resembles an electrical plug. In a presentation at CES, Deborah Wahl, GM’s chief marketing officer, described the design as "a nod … to our belief in a new electric future over the longer term."

GM has steadily unrolled plans for new EVs in the last half-year, including a Cadillac sedan called the Lyriq, a monster-sized GMC Hummer and an autonomous shuttle, the Cruise Origin.

The 113-year-old automaker is trying to catch some of the buzz of electric carmaker Tesla Inc., which this year has rocketed to a market valuation of $805 billion, or almost three times that of GM.

Some analysts applauded GM’s moves. "We give GM credit for showing how, in a more electrified world, they can increase their TAM [total addressable market] moving into new areas," wrote RBC Capital Markets analyst Joseph Spak in a note to investors.

Wall Street yesterday nudged GM’s stock to almost $48 a share — nowhere near the galloping valuation of Tesla, but a new high for the Detroit automaker.